Two weeks and 4 days (at least) to go mouldy!

I couldn't resist posting about this loaf of bread......

We usually eat Vogel's bread, and the occasional spelt loaf either made by me or bought at the local market, but one day nearly 3 weeks ago we had run out. On our way home from a day out there was nowhere close by that sold Vogel's so I had to buy this one from the Co-op. What they had left was all much of a muchness. Husband had sandwiches made from it in his lunch box for a couple of days, and I tried it once for my lunch. That was enough! It was yuck - didn't taste of much at all and the texture was horrible. There was about 3/4 of the loaf left but it really was so awful that I just couldn't bear to eat any more once we'd got some more Vogel's. So I got it out of the bread bin and, er, left it out in the kitchen, while deciding what to do with it........ No smell of mould hit me so I admit it continued to get left. 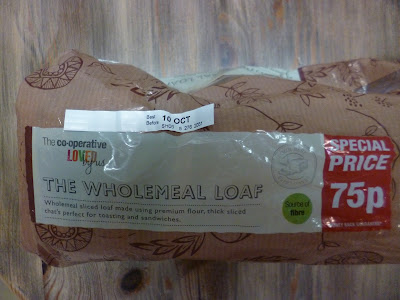 Yesterday, as I still hadn't noticed any smell of mould coming from it, I had a look to see if there was any.

This was all there was after 2 weeks and 4 days AT LEAST! After all, who knows when it was made!

The mould is hard to spot isn't it?!! If I'd left the Vogel's bread for that long it would have been one big heap of mould. 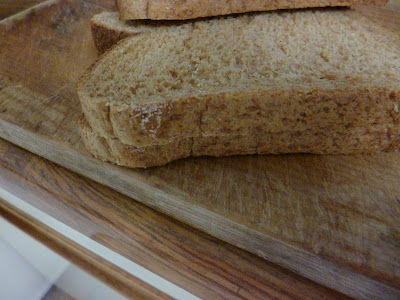 Then I read the ingredients, as obviously stuff had been added to prevent it going mouldy too quickly. 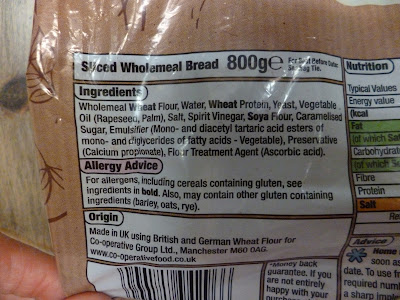 A lot of sliced bread has the same rubbish in it. I don't actually know much about the preservative Calcium Propionate without googling it, but I certainly don't like the idea of eating bread that "keeps" for this long. It is just not natural and that alone puts me off. Some bread is actually advertised as keeping for a long time - these additives are the reason why.

This is the list of ingredients in the Vogel's loaf. No preservatives or emulsifiers. 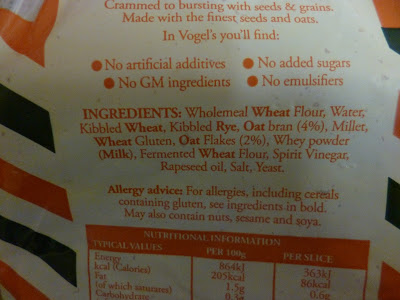 This loaf usually costs £1.50, although can often be found on offer at less. The Co-op one cost 75p.

Obviously anyone with a freezer can stop it going mouldy by just taking out of the freezer the number of slices that you will eat in a day or two, and also by storing it under the right conditions. Even if our bread does go mouldy, I don't automatically throw it out - I just cut off the offending mould, and I have never suffered any unpleasant consequences. I did once, though, when as a sort of experiment as much as anything, I tried some yogurt that was 3 weeks past its date.....it did admittedly taste a bit sharp but even then all that happened was a mild tummy ache and a visit to the loo......!

The other day I started to add some cream cheese to a pasta dish I was cooking and it was only after some had gone into what I was cooking that I noticed that some of the cheese still in the container was mouldy, and also that a tiny mouldy bit had gone into the pasta. The rest was OK. Well, I fished out the tiny mouldy bit, did not tell husband, and we ate it and were fine of course. [As I write You and Yours on Radio 4 is talking about wasted food!]

Do you always throw out food which has got mould on it??!!