NOTE; I've decided to start putting links in a list at the bottom of my posts, rather than inserting them in the text.

Ever since the demise of my extremely comfortable Teva sandals (I could walk miles in them) after about 14 years wear, I have looked for something similar to replace them.The newer Teva versions are nothing like as good, and neither are any other "walking" sandals that I've seen. In 2016 I discovered Saltwater sandals and sent off for some; I guessed they wouldn't be quite the Teva equivalent I was looking for, but I very much liked the design. They come in lots of colours, including an olive green that I would love to have.


These are mine, pictured on the cobbler's last that belonged to my grandfather, who died before
I was born - 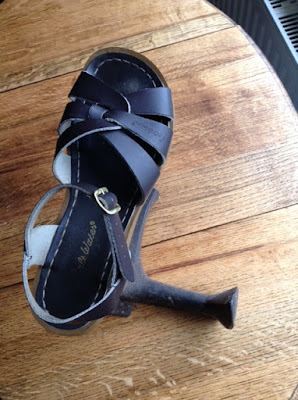 They are a perfect fit, and very comfortable, and I can cycle in them. However - here are some facts about my right foot, which I'm sure you are very interested in. A few years ago I realized that I was having problems with slight numbness in the toes of said foot, and after a lot of reading up I realized that I had what is called a Morton's toe (on both of my feet actually, but the left foot isn't negatively affected by it) which is where your second toe is longer than your big toe, due to the metatarsal bones in your big toe being shorter than they should be. This was causing the numbness. I knew instinctively that I needed to be able to feel the ground more as I was walking. I then came across "Born to Run" by Christopher McDougall, a fascinating book to read if you are interested in how we naturally walk, but don't, when we wear (most) shoes. Look at a baby's foot, at how the toes are splayed out, and look at an adult's foot........!!!!!!! It's shoes that are responsible for that change. Many people, when they are diagnosed with some sort of foot problem will be recommended to use orthotics; however this is often exactly what they don't need. What they actually need is to get back to a more natural way of walking, and a change of footwear may well be the answer rather than orthotics.

I have since struggled to get shoes that fit the natural shape of my foot, especially winter ones, and that have thin enough soles to really feel the ground beneath them. The soles on the Saltwater sandals are indeed thin, and are fine on short distances, but I have found they are not so good when walking further, or on hard surfaces. To be honest I suspect it may be the type of sole material used as much as the thickness, but I thought I'd try adding some extra material to the soles to see if this made the difference I was looking for.

So, could I, and should I, Do It Myself?

I thought of looking for a pair of shoes or sandals in a charity shop, cutting off the soles and sticking them on my sandals, as I already had some suitable shoe making/mending glue from a previous (unsuccessful...) project, but I didn't see any. Next step - I thought I might as well find out what the local cobbler would charge, so took the sandals in and asked.

Apparently it was "the work involved" that made the charge so high. Well, to be fair to all craftsmen and women, I know that people don't always realise what or how much work is involved in a job, but there was no way I was going to spend that amount.

Instead I went home and ordered some stick on soles instead. I actually bought 2 pairs of very large Vibram men's soles - just the top halves, and each pair came with a tube of glue. My intention was to cut two top halves and two bottom halves.

First I sandpapered the soles of the sandals, as instructed, to roughen them up. I should also have done the same to the new soles, but I forgot.....but they weren't all that smooth anyway so I thought they'd probably still stick. I then cleaned the sandals' soles with meths.


I put the sandals on top of the sole, and drew round them - 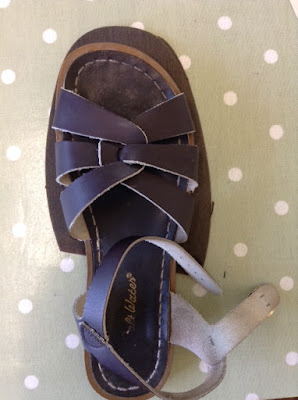 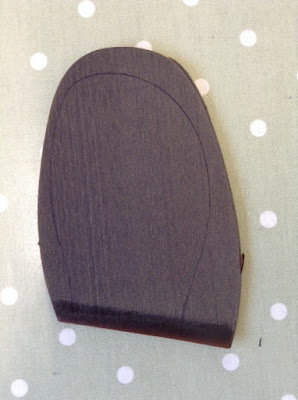 Cutting the material was actually quite difficult. I used a Stanley knife and went very slowly so that the knife wouldn't slip, and then I proceeded to spread glue over the whole of each sandal sole. (I have to admit the glue stinks, and you really do need the window open. This is much more stinky than the other stuff I have.) However, I realized pretty soon that the stuff begins to dry out rapidly and and you need to just put glue on a SMALL area, spread it, and then do another bit. Otherwise you could end up with the whole sole covered in glue but not being able to spread it as most of it would have already half dried.

I then left the soles to almost completely dry for the requisite amount of time, about 15 minutes, and then stuck the soles on. Meanwhile I realized I'd made another mistake by not drawing round the bottom halves of the sandals when I cut out the top halves i.e. before I spread the glue all over the soles...... But I managed to do it all right at this stage anyway without the uncut bottom halves sticking to the sandal. That may not be very clear......but basically the lesson I learned was that you have to think carefully, before you start, about the order you're doing things in!!


Here is the completed job - 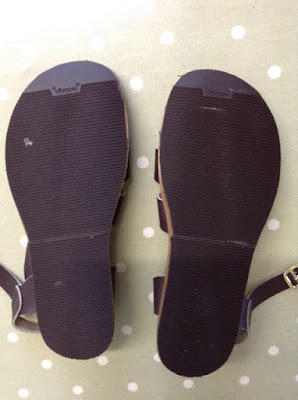 As you can see I didn't get the new sole fitted to the sandal on the right quite perfectly - that was mainly due to it being hard to cut exactly on the line I'd drawn. And maybe my inaccurate drawing in the first place.... 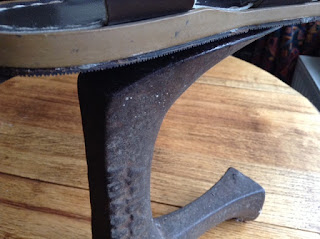 I'm really pleased with how well the job turned out, although I won't know whether it's made the difference I'm hoping for until I wear them again, which won't be just yet....and the total cost was £11.97, a lot less than the £30 I'd have had to pay the cobbler!

Incidentally, I think that my grandfather would have been using this cobbler's last in the days when everybody had to make do and mend. My dad wrote some notes on life when he was very young in the 1920s, and I think that probably shoe repairing would have been something his parents, and others like them, had to do themselves, along with any other mending - hence having the cobbler's last.

Anyway, that's me "soled" on doing my own shoe repairs.....next pair to do will be my beloved Dr Marten's (the style I have has a more natural foot shape than many shoes, and soles that aren't too thick, although still not completely natural) which have a hole in the leather and a split in the sole. I bought some new ones to replace them but I'm not giving up on the old ones yet.

Posted by LizzieL at 17:00 2 comments: Links to this post