Firstly, I have to apologise for the rather poor quality photos. some are taken with my Ipad and some with the new camera I was given last Christmas, but either I am thick about mastering it or there's something wrong with the camera. It just never seems to focus properly. I do like to have an instruction book with new bits of technology, but I didn't have one with either this camera or my previous one. The manufacturers of these things seem to think that people don't need them, or if they do then they can download one in the form of hundreds of pages off the internet. So, anyway.....

I first made one of these quilted wool vests - a free downloadable PDF pattern - back in March, from Husband's old boyhood canvas tent. I wouldn't fancy using a PDF pattern for something bigger than this, but for this vest/waistcoat/gilet or whatever you want to call it, there weren't too many pieces and it was easy to stick them together. You can see that post here. I wore it a lot and although it's nothing to write home about looks wise I love it as it's warm and practical.

This second one I made from some wool remnants I'd bought years ago at the Cotswold Woollen Mill. Here it is - 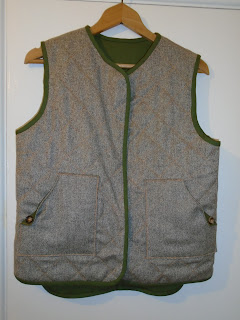 I lined it with some cotton pique which I had been given and which I had dyed. I also used it for the binding round the edges.

I should have made the openings to the pockets a bit longer, as they were a bit small for getting one's hands in, so instead I left the side seam open for about the top inch, and then folded the corner over and added the button for decoration. 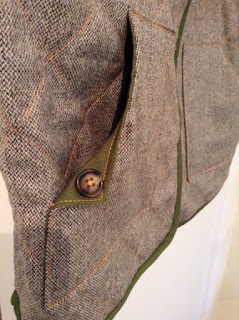 The poppers were from my collection - very old ones that I acquired somehow. I didn't have enough of the same ones, hence the odd black one at the bottom, but hey ho, never mind! 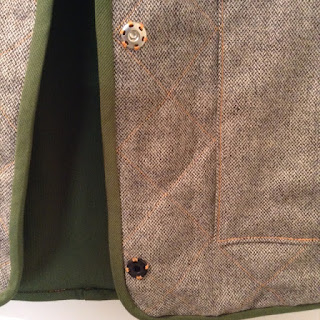 For the wadding I once again used curtain interlining (cotton domette) which worked out really well. I have a big stash of the stuff, even more now as I have just recently been given some by a lady in our village who has a curtain making business but who is moving.

After completing it, I tried it on and thought - ah, I know what I haven't done........ lowered the armholes.  I'd even written a note to myself last time to do it, but somehow hadn't noticed this on the pattern envelope. So I had to unpick the armhole binding, cut the armholes lower by about an inch, and then reattach the binding.

This pattern is really very easy, and if you don't want to go to the trouble of quilting your own fabric you can buy some lovely organic quilted cotton from the Organic Textile Company in Machynlleth, a town I always associate, incidentally, with both Laura Ashley (she opened her first shop there) and the Centre for Alternative Technology, which we visited back in the early 1990s.

One day I'd like to have a go at making this rather similar quilted Tamarack jacket from the Grainline Studio.

I am really pleased with how this turned out, but have to say that due to the mostly mild weather we've had I haven't worn it yet! December, and still mild....but I gather cold weather is forecast for later in the week.

Posted by LizzieL at 19:29 2 comments: Links to this post