Another baby! and new sewing space

I have been hanging on to write this post until our second expected grandchild arrived, which she did last Friday, just a few days late. She is our elder daughter's first, and is called Emmie, and weighed 7lbs 2 1/2oz , and was born in a birthing pool. So we now have two granddaughters, 13 months apart. I made more cot pockets - my daughter chose the fabric, and as they live by the sea it's very appropriate. 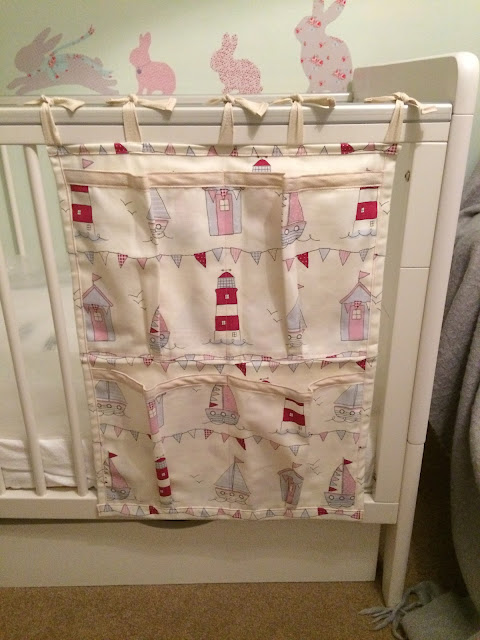 With a small piece of leftover fabric I also made a little quilted picture (one of the boats) and I also made a large drawstring toy bag out of different fabric, but stupidly neglected to take a pic of either! I think my brain was in baby's-coming-soon mode and even though I usually take pics of everything I make I just forgot. I will do so if I remember when I go and visit in a week or so.

Our now 13 month old granddaughter, Lily, got to the stage a little while ago of pulling her toys out of her cot pockets and taking great delight in throwing them onto the floor. Her daddy sent us a pic of her standing up in her cot, having done this, with a look on her face that said "It wasn't me, Daddy - honest!"

While we're on the subject of babies - I have now moved my sewing stuff to the smallest bedroom. What's that got to do with babies I hear you ask........ Well, when we lived in this house over 32 years ago, the room I am now sewing in was our eldest's bedroom (we didn't use the word nursery - is it just me or are more parents these days using that word? In my day only the upper classes had nurseries!). This is a much younger me drying him after a bath; in the corner where this blue table was my black Singer 201 now resides, in its table.


And by the way I hadn't realized how incredibly useful it is to have your machine set into a table (if you're not using a free arm that is) which gives you that extra flat space. Still not enough to start making big quilts, but big enough for what I do.

I found that having my sewing machine etc downstairs in the sitting room didn't really work very well after all. I had thought before we came to this house that I just couldn't stand the thought of working upstairs, because in our old house I used to feel very cut off upstairs. However, I have found that here I can see what's going on in the neighbourhood even better than from the sitting room downstairs. This may be a small hamlet but even here stuff happens - occasionally!

Also, one of the problems of working in the main thoroughfare, as it were, is of having one's other half going in and out and asking me things and generally disturbing me!!!! Having my own little room out of the way upstairs is much better. And I don't have to clear up, tidy up, or whatever in order to keep up with Husband's standards........

I worked out that the table on the right would fit in nicely, with my Bernina on it, and that I could have the Singer to the left. 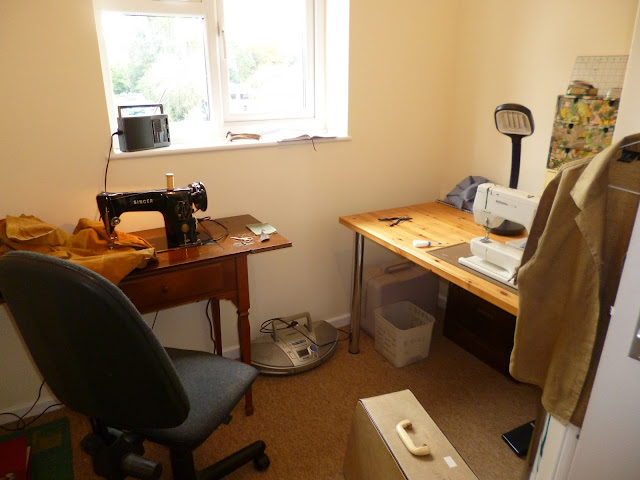 I did have a problem with storage though. Nothing that I had used in our old house had been suitable so I haunted our newest charity shop in Wantage which has lots of cheap furniture, and also another secondhand furniture place locally, for weeks to try and get something. In the end I got so frustrated that I couldn't organise all my sewing stuff properly that I decided that I'd have to buy something new, which I don't really like doing, partly due to expense and partly because I just don't like buying new when there is so much good secondhand stuff to be had. But in the end I just had to bite the bullet, and I went for these Ikea Kallax units. I wouldn't normally even consider flat packed furniture, as it's often so shoddy, but I'd had a look at some of these units that a friend across the road had, so I knew they were pretty sturdy and would suit my needs. You can choose whether to have drawers, doors, baskets or boxes in the gaps, or just leave them open. Husband had fun putting it together (at least I think he did....) with a little help from me. 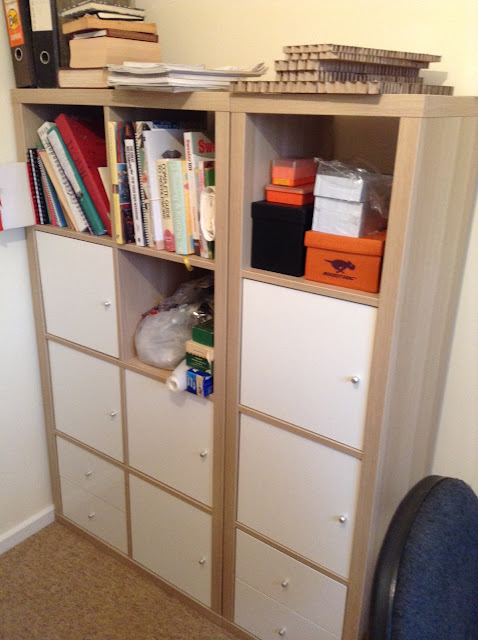 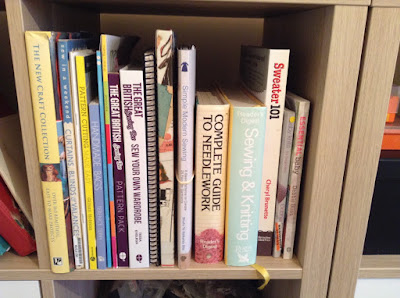 So, this tiny room works well as my sewing room, but I still needed some extra table space for cutting out. Thinks - "There's some space in our bedroom at the end of the bed, and if I were to have a gateleg table there, I could have it against the wall and have one flap out when I need it". So, charity shop came up trumps again - quickly this time -  with this for £15 (the sun was shining well and truly in when I took the photo) so that's my cutting out space. Maybe not as big as I'd like ideally, but you can't have everything. 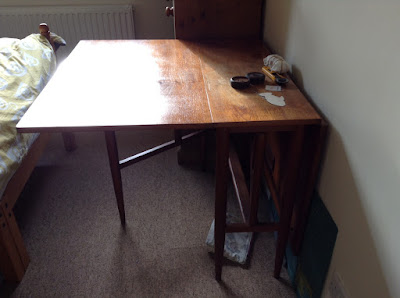 I am always interested to see other people's workspaces so I hope this has been an interesting tour for you, dear reader.

The next post will be about my winter biking. And on the reading front, I have just got to read this book, Knit 1 Bike 1, written by Janet Renouf-Miller, about her "woolly cycle journey around Scotland" on her Brompton bike. I hope to get some hints on how I might combine sewing with cycling!!

Posted by LizzieL at 17:00 7 comments: Links to this post