Singer 616G now up and running

Last year a sewing acquaintance gave me this machine. Someone had given it to her but she didn't want it.  The G in the model number, 616G, indicates that it was made in Germany, but apart from that I couldn't find out much about it in the usual way, which is first just to google it and then see what images and information come up. One image that did was, funnily enough, one with a sewing machine repair man's sticker on it saying "Tom Dilley" - he's in Swindon and I have used his services on more than one occasion. Another image was on www.singersewinginfo.co.uk.

However, I managed to work out what models it was similar to, and was able to find out, for instance, how the tension unit came apart and how to put it back together again. I found that out here here at TNT Repair. It's a gear driven, slant needle machine, with all metal gears. I have to confess that when I got it I didn't notice any of these things, even though I'd heard all of these terms...... That's what I like about this hobby - I learn new stuff all the time!

This is it with the top and the handwheel off. Notice the highly intellectual newspaper underneath. Actually I think there's some bits of Daily Mail and Daily Telegraph, so there you go. Actually I'll read anything.......... it's all educational in some way! 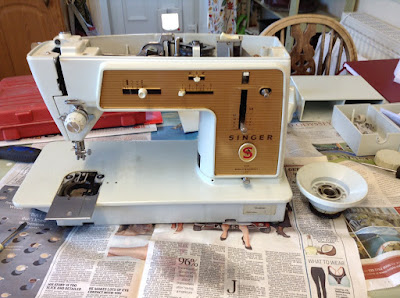 Closer view of inside the right hand end.


This is the tension unit taken apart - I laid out the pieces in order, and wrote down the direction they were facing on the machine. Even with help for reassembling available on the internet this always proves useful. Or taking photos. Or both, just to make sure! 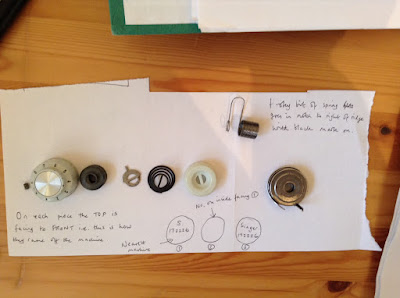 Incidentally, another website which is particularly good for information on old Singers, and which I have found helpful for taking apart the tension unit on a 201, is this Old Singer Sewing Machine blog.

I did in fact use bits from both websites to help with reassembling the unit. Even though I've done tension units like this before, I don't do it often enough to remember how to do it off the top of my head.

Apart from that, I basically cleaned and oiled the machine, and then tried out the stitches. Everything was working well, although it was perhaps rather noisy, but then suddenly there was a problem. I couldn't turn the handwheel towards me by hand, or rather I could, but only one "notch" at a time, although oddly if I used the foot controller it was OK. I worked out that the problem was in the area of the motor shaft - if I pressed my finger down hard on it while turning it by hand (electricity disconnected) it worked properly.

I asked a few questions on the Yahoo Vintage Singers group, and got various replies, and eventually managed to remove the motor from the machine, with help from You Tube. This is what it looked like. Somebody on the Group said it looked like someone had worked on the motor and not done it very well. I believe the holes are something to do with balancing it. Anyway, Husband then took it apart, with my permission......but that was as far as I/we got.......


I have taken apart a motor on a Singer 185, and put it back together again, but that was a different sort of motor. I concluded that fixing this one was beyond me, but as I thought the machine was well worth spending a bit of money on, I took it to the above named repair man.

Here I should say that I have a German friend who I had done some sewing jobs for, but who wanted to get herself a machine so that she could do them herself. I mentioned that I happened to be working on a German one, and that it was made in Karlsruhe [sorry, German people, for the lack of umlaut on the "u" - I still haven't worked out how to insert them, despite Elder Son having told me how to do it....] - at which point she exclaimed "Oh, that's my home town!". So I just had to get this machine up and running so that she could have it, as it clearly had her name on it.

Anyway, Repair Man fixed the motor for me. I went through all the stitches so that I could show my German friend how it all worked. As well as straight stitch, and various zigzag stitches, this machine also does chain stitch; I think the "toy" machine that belonged to my older sister, which was in our house in the 1960s, did this as opposed to lockstitch, but I've never seen one since that did it, so this was something else for me to master. Chain stitch will come undone with a pull of the thread, because of the way the stitch is formed, unlike the usual lockstitch, which doesn't. I think some people use it for tacking.

And this is the working machine, all fixed up! Unfortunately the plastic base broke when Husband dropped it. It's such a shame that these tough all metal machines came with plastic bases! I've seen other broken ones. It's now gone to the lady whose name was written on it. I have to admit that because this machine proved more difficult to get going than others I've worked on, at times I felt like shoving it under the table and forgetting about it, but I think it was well worth persisting with.  Oh, and there just happens to be one on Ebay now for £299!!!!!!! [I think it's been reduced as I see it's now on for £269.99] 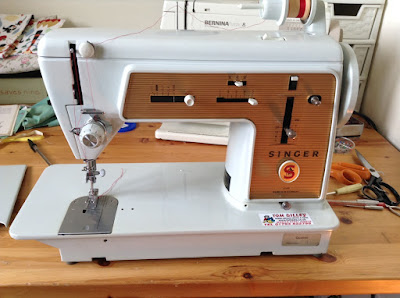 I have got three other machines waiting in the wings....... in order of priority, a Janome Novum which I bought in a charity shop, a Jones (1970s model) and a Harris hand machine, both of which I have just been given. I was phoned recently and asked if I could put a new drive belt on a machine; after initially saying I hadn't done it before and therefore recommending my Repair Man, I thought - that's silly, I'm sure I can do it. So I rang her back and said I'd do it, and I did. Another string to my bow!

And for anyone who follows this blog and knows that we moved last year after 32 years in the same house, what should I see on the windowsill of our old house recently? You've guessed it - an old Singer! Ah, I thought, how lovely. I have since found out that the new lady of the house rescued it from being taken to the tip! Just what I would have done.

And now on with some sewing jobs.

Posted by LizzieL at 17:00 6 comments: Links to this post