I am currently struggling with this Harris Family No 2 transverse shuttle machine (long bobbin). I was given this one, along with a Jones Zig-Zag (which remains upstairs until I decide whether it's worth spending money on parts for it) many months ago. Eventually I removed a lot of parts from it, cleaned it all, put it back together, oiled it, and removed it from the kitchen table while Christmas came and went, and sewing jobs did too. This week it was time to get it out again and attempt to sew with it. By the way the clean up job might not look that fantastic compared to some, and indeed if I'd had the time maybe I'd love to have got everything shinier, but for now it's a perfectly good enough job for it to function. 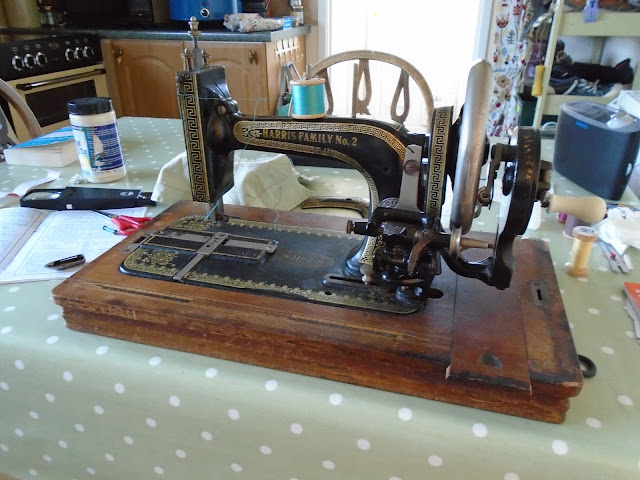 I have come across one TS machine before, which was this smaller Harris K - (in our old kitchen, which I miss!) 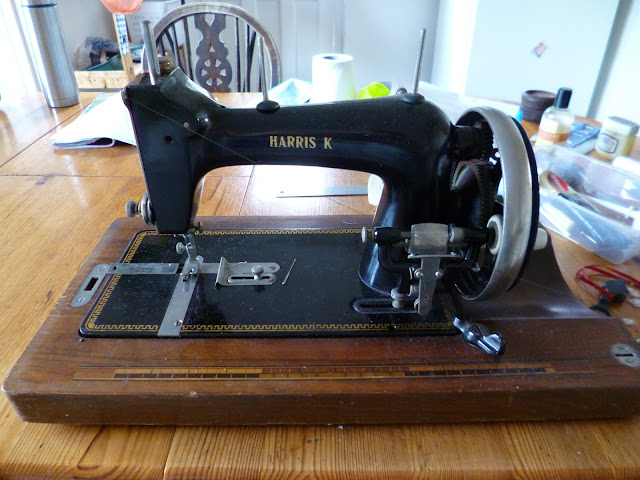 This had belonged to my father-in-law's mother. I got it stitching without too much trouble, but even if it had been mine to keep I wouldn't have bothered, as I didn't think it was a particularly good machine. Harris did not make the machines themselves; they were made by other companies, such as the German companies Haid and Neu, and Stoewer, who made the one I have now. This one is worth persisting with I think, which is why I am, despite the struggles! I wouldn't normally write a post about a sewing machine job until it was finished, but I decided to with this one.

The struggles are caused simply by my not knowing as much about these TS machines as the other machines I have worked on, which either had long bobbins but had vibrating shuttles, rather than these transverse ones, or had round bobbins. Things are different behind that flat face plate too. It takes time to learn something new and I wasn't sure if I ought not really to be spending my time on other things, as this job probably won't earn me any money (although you never know....). Having said that, I felt sure that this machine was essentially in good order and it seemed such a shame not to get it working. It is also rather lovely to look at in my opinion, and, I'm no expert, but to me the engineeering is amazing. It is different to Singers in that all the metal rods underneath, and the needlebar and presser bar are rectangular as opposed to round. I find it amazing how these rods fit so accurately against each other, or inside a hole, and then with just a little oil between them they move smoothly. I like just turning the handle and watching everything move, and listening to the lovely sound it makes.

This was the order of work -

The needle is completely round and not flat on one side as most domestic sewing machine needles are nowadays. These needles are not manufactured any more but it is possible to get something which does the job. Inserting it is not as simple as it sounds as with this machine you have to "set" it. Normally you just push the needle up as far as it will go and then tighten the clamp, but with this machine you have to gauge it by eye, making sure that when a mark on the needlebar is at a certain point, the eye of the needle is just entering the needle hole. I came across a comment on a post in Lizzie Lenard's vintage sewing blog on these TS machines, which proved very helpful. If you scroll down to Petrushka's comment on August 15th, he posts a link to a very good PDF with photos of a TS machine - a different make but still useful. It was only when looking at his photos that I was able to find the mark on the needlebar.

2  Learn to thread the shuttle. The diagram in the manual I've got is not all that clear, and despite there being videos on You Tube showing how to do it,  none of them are 100% clear, particularly with the last step of the threading. Perhaps I will take photos when I am certain that I know how to do it correctly, but I'm not at the moment. (By the way, I was over the moon to unwrap a new camera at Christmas - thank you children! - so I don't have to use the Ipad all the time or an old smartphone!) Anyway, once I'd done that, the next thing was to try to draw up the bobbin thread, which I succeeded in doing, but after some unsuccessful attempts at stitching I removed the shuttle, and then couldn't get the bobbin thread to come up again, no matter what I did.

I needed to see what was going on in the shuttle area, so I removed the throat plate and right hand side plate, and watched the shuttle as it moved towards the upper thread. I could see what was going wrong, and that if I held the upper thread in a certain position then it stopped getting caught up where it shouldn't and went where it was supposed to and then drew up the bobbin thread. Whether it is supposed to be that tricky or not I don't know.

Here are the stages of picking up that upper thread -

No joy - the bobbin thread was not being caught with the upper thread....... so there were no stitches underneath. That's as far as I've got. One other thing - it may not help that that the needle is the only one I've got for this machine, and it is quite a thick needle; I haven't got the right weight of thread for it amongst my collection. Getting the right weight of thread for the needle and fabric is another important thing I've learnt over the years. Incidentally the needle itself has no markings on showing size or make, but as it came in this box...... 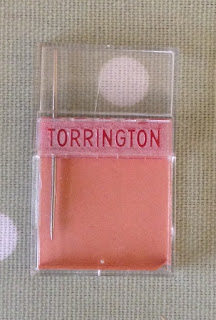 .....I am assuming therefore that it is a Torrington needle. On the paper in the box are the numbers 339 and 2. I don't know if they mean anything. It is so easy to get sidetracked in this hobby, as I just had to google Torrington, never having come across their needles before. I then found out that it is a town in Connecticut (where my daughter-in-law is from and where Eldest Son worked for a few years) which is famed for its industry -

Needles and bicycles - how appropriate!

Another blog with a useful post on the famous Singer 12 TS machine, and needles that work with it, is here. I say famous, but although I'd come across them before I didn't realize how famous until a friend had one for sale in her shop (the Arbery Emporium in Wantage) and asked me to have a look at it. I did some googling and then I knew.......

Here's one more pic showing the amazing engineering. Actually it might not be amazing to an engineer but to someone who isn't - it is! Looking underneath from behind the machine, you can see that there is a groove that the needle passes down. The shuttle passes over the needle while it is in this groove. So smooth and with such precision! 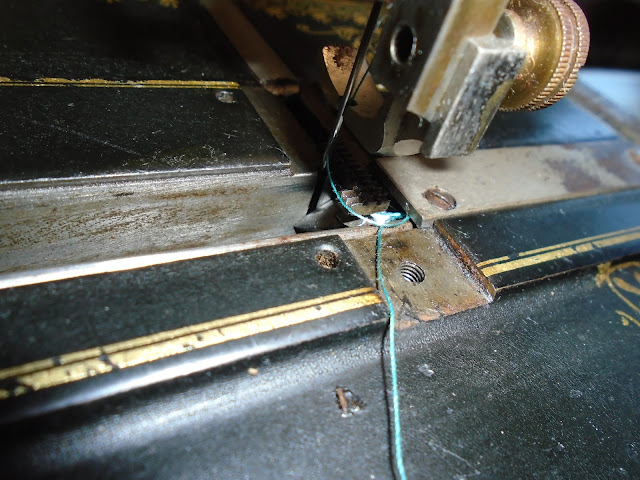 Hopefully there will be a Part 2 to this which will not say "I've given up...." but instead "success!"

Other distractions lately are a book called "Stitches in Time" on the history of clothes by Lucy Adlington, bought in a charity shop and very interesting, a fascination with the clothes that George Mallory was found to be wearing when his body was discovered on Everest in 1999, and leading on from that a blog called Well Dressed Dad, and last but not least a programme on BBC 4 called A Stitch in Time.