Doll's bedding set made for Granddaughter

Granddaughter No 1 was 3 just before Christmas. I made her this set of doll's bedding, which was a feather pillow, made from old cushions (feathers everywhere ....) a pillow case, a duvet made from a piece of wool fabric I was given, duvet cover made from calico, and duvet cover. The little doll is made from calico and stuffed with scraps of curtain interlining.

The first thing to say is that some time ago one of my customers had given me lots of very old baby clothes which her husband (about 75) had worn. She gave them to me because none of her family wanted them and she thought I might appreciate them. I gave them all a hot wash, to see if they would stand up to it without falling apart as much as anything else, and then I wondered what to do with them.....

I know some people might consider it sacrilege to cut such things up, but I did..... The bedding below is made from one of the gowns, and I would guess is probably a cotton/wool mix. When I was doing my 'O' level needlework back in the 1970s, we were taught that the fabric known as Viyella was 80% wool/20% cotton, and that the one called Clydella was the other way round, i.e. 80% cotton/20% wool. I remember some of my school blouses being made from it. I don't know whether you can still get a fabric of this fibre content, but it is, in my opinion, such a sensible fabric - both soft and warm to the touch, ideal for winter shirts and blouses. It was lovely to sew with.

In these old baby garments there is a lot of fabric, as there was much gathering, so there was plenty in one of these gowns to make this set. The applique and embroidery is all from the original garment. I edged the pillow case with a piece of my wedding dress, the fabric for which came from Liberty's in the 1980s.

I made the little doll as I thought that Granddaughter might enjoy putting her in and out of the pocket, and also taking the nappy on and off. Maybe she will do that when her mummy is changing the nappy of little baby brother or sister who is due in the spring. I also thought that she might like trying to undo and do up the buttons on the duvet cover. 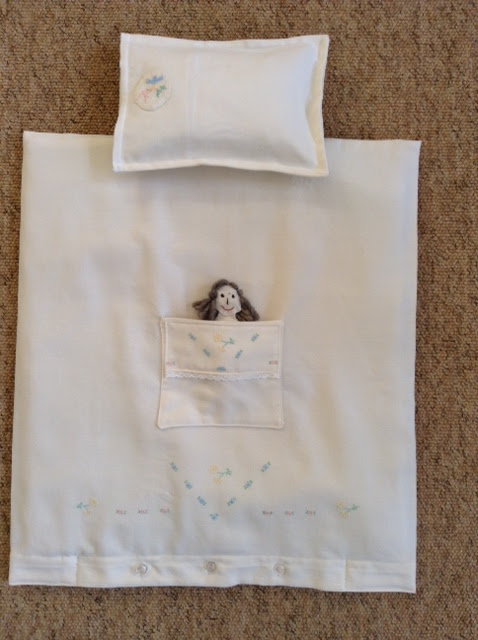 Details of the embroidery - 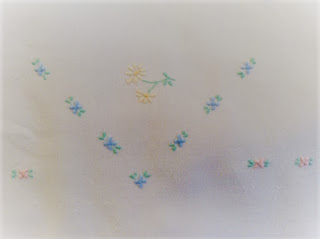 The piece of lace was also from the gown - 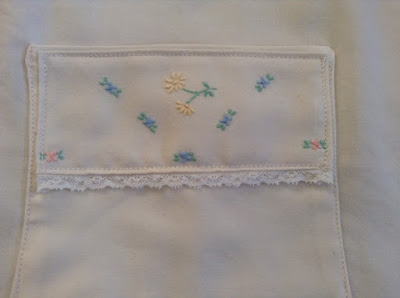 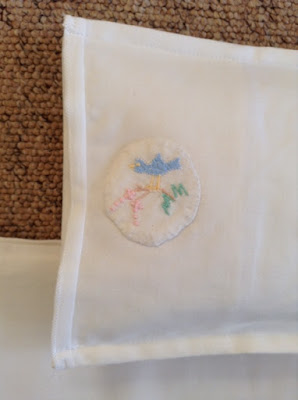 Making the duvet with layers of wool (wool makes the best duvets! Yes it really does!) 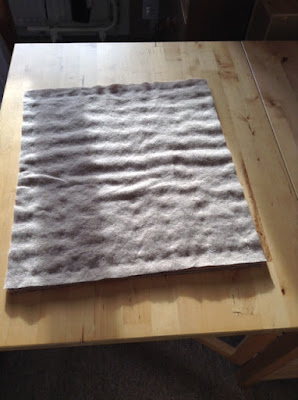 I sewed the original Harrods label back in and added my own on the back, with the date of Granddaughter's birthday. 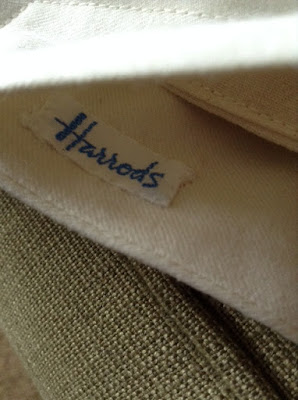 And I also have to show you the money box that Husband made her, because it is so lovely!

The money goes down the chimney. Husband spent hours getting it to look just right, and making a removable bottom. Now she can start saving for a real house! He also made Granddaughter No 2's present, and I made stuff to go with it - next blog post!
Posted by LizzieL at 18:00 3 comments: Links to this post