Coffeeneuring trip # 3, a ride to Bishopstone in Wiltshire

I am trying to stick to a watery theme for this year's Coffeeneuring trips. If you want to know more about Coffeeneuring then click on that link, but basically it's about riding your bike somewhere and having coffee - and you're allowed tea or other beverage - and sharing your ride with others doing the same, during a period of a few weeks at this time of year. Most people do this through a Facebook coffeeneuring group. You can go to a cafe, or you can take your own/brew up your own, and drink it outside - officially that comes under "Coffee without walls".  Most of my trips will come under that category, but I'll treat myself at some point to a trip to a nice cafe. You can also open up your house to other coffeeneurs.  It's such a simple idea and yet somehow it's great fun! What I like about it is that it challenges me in a different way to get out to new places on my bike, and I also love reading about other coffeeneurs' trips.

As I said, this year I'm going for a watery theme, although trip number one was to a stream that had run dry, and trip number two failed to be properly watery as there was nowhere near enough the water to sit. But one of my possible watery venues was Bishopstone, a village a few miles from here just over the border in Wiltshire, which has a lovely pond, so that's where I decided to go today.

Before I set off, there was some preparation to do. Sometimes I wish that going somewhere on my bike didn't need preparation, but it does........ Even if I'm only going shopping to my nearest town, 4 miles away, there's routine to stick to - unlock the garage, get the bike out, check the tyres, lock up the garage again, make sure I have a bottle of water - and something to eat, as even on a short journey I can run out of energy if I don't eat. In winter I also need to strap my trousers round my ankles, or tuck them into my socks (soooo fashionable....) and put cycling gloves on. Plus I like to take my Garmin for recording the ride. And though I don't use a mobile phone much, I try to remember to take it with me when I cycle, in case I have to make a call of shame to Husband. And that's just for a short shopping trip! If I'm going out for a long ride I need more food and probably a second bottle of water, and I need to think about what the weather's going to be like - e.g. do I need to wear or carry a waterproof?

So you see sometimes I get fed up with all this and think "Can I be bothered?"

But the thing is - yes I can, because it's worth it!!! Even the worst of bike rides leaves you feeling better when you come home than you did before you went out. Today's preparation included making the coffee, and as Coffeeneurs are all quite interested in what brand of coffee /tea/whatever fellow coffeeneurs drank, and what stove they brewed it on (if they did) here are the details -

When all was in the panniers, I set off, diverting slightly to do an errand on the way. To be honest I didn't enjoy the ride much for the first few miles, as it was windy and I was slightly lacking in energy, probably due to it being about 3 hours since breakfast. I couldn't remember whether there was a bench by the pond at Bishopstone - we have travelled through the village hundreds of times by car and I have also cycled through it and I'd never noticed one, but there usually are benches by village ponds so I was confident of having somewhere, apart from wet grass, to sit and drink and eat,

All the preparation was worth it when I got there, about 10 miles later. It was, as I have said before in this blog, "Jus' perfick!" (Pop Larkin, Darling Buds of May) - the sun was well and truly out and what could be nicer than to sit by a village pond after 10 miles of cycling and drink coffee and eat a banana and a home made Pumpkin, Prune and Chocolate bar (even more delicious warmed, with cream, as a pudding) - recipe further down if you're interested! 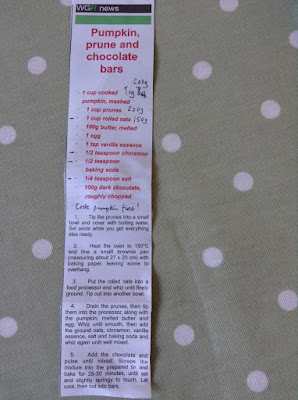 Nearby was this information board - 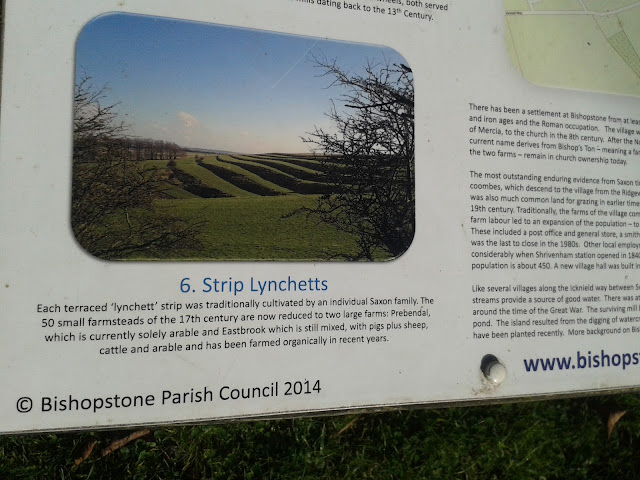 I found the bit about the farms interesting and rather sad. It applies too to this estate where we live. When we came here in 1981 there were beef cattle and about 700 sheep. Dairy cattle and pigs had already gone in the 1970s. The beef cattle went in 1995 and by the time Husband was made redundant in 2003 the sheep had gone too. Only arable is left now. There are a few sheep around but they belong to other farmers. Land on this farm and another close by has been sold off in the last couple of years and it has been bought by neighbouring wealthy landowners. The farms just get bigger and bigger. The arable work on this estate has been done by contractors since 2003. The only employee left is the gamekeeper, who also has to do maintenance in the few remaining houses.


Then I wandered off, exploring paths and places I didn't know existed. As I always say, it's amazing how much you see when you travel on foot or by bike that you don't see from a car.

I went into the churchyard, and looked at the gravestones. First I read this one - 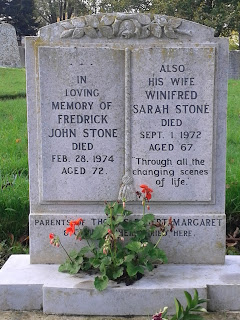 and noticed the bit at the bottom which says that their four children are buried here in the churchyard too........ and there were their graves, next to them. Look at the ages - 3, 4, 12 and 16. How terrible to lose your four children all so young. I wondered why they died so young, and when I went into the church the vicar was there talking to someone, but he disappeared before I had a chance to ask him if he knew. 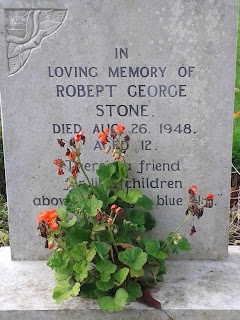 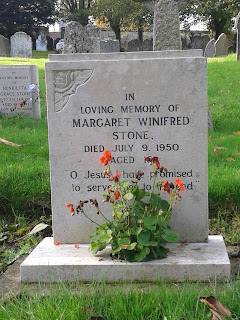 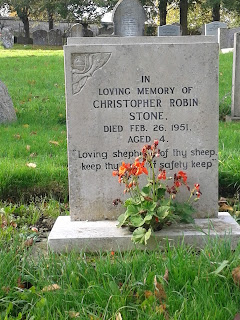 So, that was my coffeeneuring morning. After pootling around the lanes a bit I cycled home; the return journey was much better than the outward one - I had more energy, the sun was shining, and the wind was behind me. The preparation was most definitely worth it!

Posted by LizzieL at 17:00 7 comments: Links to this post