I have been intending to write this post since last October, and now having read this post on anniebikes recently about the Rivendell Clementine I've been inspired to get on and do it, as her post, and the comments that follow, has lots of interesting things to say on the subject of step through bikes. I also found this article about mixtes on Lovely bicycle! very useful. I didn't even realize that my own bike, a roughly 20 year old Trek, was a mixte until a few months ago, and now I'm a great fan of them - I've learnt a lot in the past year!

Back last year, this bike was off the road for several days, and as it was and is my main and preferred means of transport I felt lost without it! It was a bit like my sewing machines - some time ago I realized I could probably do with having two machines, partly because different machines are good for different things, but also in case one ever goes wrong and I can't fix it. Eldest Son told me of this formula about the number of bikes people have, and I believe it has also been applied to sewing machines  - it is n + 1. What this means is that n is the number of bikes/sewingmachines one has but one always wants/needs one more.......

So last year I decided I really would like to have that + 1 bike. A couple of years before that, I had looked longingly at first Thorn touring bikes, and then at Oxford Bike Works bikes. OBW bikes were similar to Thorn's and a mere 14 miles or so away from me, and as I do like to try to buy locally, I decided to arrange a visit to Richard there. I wanted a step through (this was before I knew what a mixte was) as I didn't want to swing my leg over the saddle, having done it on the Trek aluminium hybrid that I should never have bought in 2014 (although technically it was a women's frame, the crossbar was high and I ended up swinging my leg over the saddle). It's not that I can't do it - I just don't want to.

I had the choice of a step through frame with either 700c wheels, which would be built from a frame supplied by Intec, or 26" size wheels with a frame made by Lee Cooper in the UK, and being basically the OBW Model 1. Both were steel. I went for a short ride on one of Richard's "men's" bikes in the 26" wheel size (I can't actually remember the frame size of this bike - this is significant regarding what happened in the end) and decided to go for the latter, although it was more expensive, as I liked the extra controlability that the 26" wheels seemed to give. Richard took the measurements of my Trek, as I was happy with the size of that, and did various measurements in the workshop with me on the bike I had ridden, and the new step through bike was ordered. At this point I should mention, as it's significant later in the story, that I thought I remembered him saying, when I was sat on the bike in the workshop, "I think you need a large frame".

I requested a Brooks B17S saddle. I like my Bontrager saddle, which I was measured for in my local bike shop, but I had wanted to try a Brooks for ages and adding it on at this stage was cheaper than adding one later. And small bar ends.

Six weeks later I went to collect the bike. I have to say that my immediate impression was of disappointment, because my first thought was that the bike looked small, a little bit like a child's bike made to fit an adult. I hadn't expected it to look like this. It may sound silly but I didn't want a bike that looked small, even if it was the right size for me. I actually think now that that first thought - of it being small - was because it was too small. Anyway, I rode it the 14 miles home. I have to say it was an extremely uncomfortable ride!! My immediate thought, thinking of the very harsh ride that I got with the Trek hybrid, was "Oh no, what HAVE I done....? Have I made another mistake?"

This was the bike as it was when I first got it home. 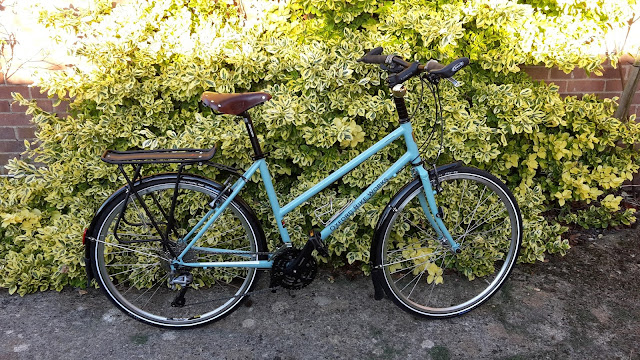 One thing I knew was that despite what everyone says about breaking in a Brooks saddle, there was no way I was ever going to break this one in. I'd worn my padded undershorts even though I wouldn't normally need them on a short journey like this one but even with them on I was very uncomfortable! So that was the first thing that would have to be changed. I came home and read up all I could about the different Brooks saddles, comparing all the measurements, and comparing the B17S measurements to those of my current saddle. I concluded that I would probably be better off with a wider one. I wasn't getting the width that I needed according to my sit bones measurement. Lovely Bicycle! has a very good post on Brooks saddles.

Another thing that I thought might be affecting the ride were the tyres, which were Schwalbe 32mm (I think they were Marathon Plus but I can't be certain now). I also didn't think the handlebars were at the sort of height we had originally agreed, but it wasn't until I rode it home that I realized this.

So, back to OBW. Richard changed the saddle to a Velo model, which I knew wasn't my ideal but was acceptable, put wider tyres on (unfortunately I can't remember the width now), and raised the handlebars to the position I wanted by putting in more spacers (though it was only afterwards that I realized that in fact this put the handlebars slightly nearer to the saddle, which I didn't want). This time I left it with Richard, and he kindly returned it to me a few days later.


I took it out for a ride. It was more comfortable, but inside me I had this awful thought that I'd just spent about £1600 on a new bike and I knew I wasn't happy with it.....Husband and I measured and measured both this bike and my Trek, to see if there was a logical reason why I didn't feel right on it. There was very little difference in the measurements, although one important one was in the distance from the saddle to the handlebars; I needed to move the saddle further back but it wasn't possible - it was as far back as it would go. I do know I've got long arms. Again I refer here to Lovely Bicycle!, although I can't remember the particular post, but it says somewhere concerning fit, that in the end you just have to go with your gut feeling as to whether a bike is right for you or not, and my gut feeling was that this one wasn't, although the only reason I could give was that it just felt small, and generally not right.

In the end, Richard offered to take the bike back and give me a full refund, and this I accepted. I rode it back and he kindly took time to discuss things with me. I think it was probably like when I know a sewing customer of mine isn't happy (thankfully it has rarely happened!) - I just want to know what's wrong and put it right if possible.  I did mention that when I first went to see him I thought he had said that I needed a large size, as opposed to the medium I had. So possibly there was some error in the sizing, but neither of us could be certain.

He did put forward two ideas; one was taking one of his large size bikes home to try out for a longer time than I had originally had, and the other was that he was thinking of getting in a step through in the next couple of months in a large size for customers to try and maybe I would like to try that out. I would have been particularly keen on trying out the large step through, but I have heard no more. I am the first customer he has refunded - he obviously has lots of happy customers judging from his Facebook page.

My own theory is that given the choice between two sizes of bike, I would naturally tend to choose the bigger one, which may be something inexplicable, or may be down to something logical - I don't know! I've studied bike geometry until it comes out of my ears.....

Regarding step-throughs and mixtes, I also know now that looks wise I definitely lean more towards a mixte. As I said earlier, I like to buy local when possible, or at least British, but I have to admit that a bike I am leaning towards is the Dutch Koga Traveller. I would have loved to have the steel Koga Randonneur, which another blogger, Brenda, has, but unfortunately Koga are no longer making them. The Traveller is aluminium, which I would have steered (ha ha...) clear of after my experience with the Trek, but after more research and talking to people who know more than me I'm inclined to rethink my opinions. I've also looked at the bikes made by VSF Fahrradmanufaktur, although they only come in black [Note added 7th April: Having delved deeper into the website I find that they do indeed come in other colours, and some very nice ones too.]  The mixtes apparently only come in one frame size, which I don't understand. You certainly get a lot for your money with both of these.

I'm slightly nervous about buying a bike from somewhere that isn't within reasonably easy reach by bike (for me that's Tadcaster or London for the Koga, and London or Cambridge for the Fahrradmanufaktur) in case I need to take it back for any reason, and neither of these makes are available within that sort of distance, but hey ho, maybe I shouldn't worry.

I'm sure I've missed out something I wanted to say but after several days of reading this post through and editing it I'll go ahead and finally post it.

And just to give you something to look at, Vulpine, the bike clothing manufacturer, have collaborated with British frame builder Gavin Buxton of August Bicycles to make this very beautiful - and expensive! - mixte. Intended more for urban riding than touring so I understand.

All comments and opinions very welcome on this subject (as on any other post of course)!

Note added on 7.07.17: I later found that I had been right regarding the size of bike I should have had - see my post here for the details and the bike I later bought.

Posted by LizzieL at 15:00 2 comments: Links to this post