Recently I found myself wishing our local CUK group did mid-week rides, and thought of suggesting it, but happily at another unrelated local event other members happened to be there and told me that such a group was just starting up! The next ride was the following day, and I cycled in the 5 1/2 miles or so to join them at the start.

It was highly enjoyable - there were six of us, nothing too strenuous, and discovering some new roads. As the planned route was coming through my village, I had made chocolate muffins before I left, thinking I would offer the others a coffee stop here (and use of facilities...) instead of the planned stop at a nearby village's cafe. They accepted enthusiastically - and one of the other members also contributed home made gingerbread men. Pity I didn't take a photo!

Yesterday we had another ride, the first official one for this mid-week group. This time there were eight of us, and again we had another very pleasant ride of about nine miles around local routes. We stopped at the lovely Ardington shop and cafe for refreshments - and again used the all-important facilities! (On my way home a couple of hours later, the facilities were more bush-like....)

What is good is that even though these rides are all on roads I have ridden before, there is always some little bit I haven't discovered. I commit them to memory for future use.

I still find group rides a bit daunting, and I have to slightly force myself to do them, as I have thoughts of -

"Will I be able to keep up?" I did. This group's rides are not fast paced though.

"Will I fall off in front of other people and look a plonker....?" I did slip (wet leaves perhaps) turning a tight corner of a path but did not fall.

"Will I manage any hills?" There was only really one on this ride and no, I did not manage it, because I did not manage the sharp left turn onto it, and had to get off and walk, but it didn't really matter.

Having said all that, I have always ended up enjoying them. What I enjoy is the social side - riding alongside someone else who also enjoys cycling, and chatting, and then more chatting over some delicious refreshments!

After the ride, I cycled back into town to do some shopping. Being the fan of charity shops that I am, after parking my bike I thought -

And what was almost better than finding a bargain (which I did, incidentally - a nice linen East tunic) was meeting the lady who I think of as the Stylish Bicycling Lady. This is a lady who I have noticed because I love her vintage bike - green sit-up-and-beg with basket and bunting! -  and she is, you've guessed it, very stylish in her clothing, but in a charity shop sort of way. I'm sure she won't me saying that! I also dress in a very charity shop sort of way, but I am more along the lines of a bag lady!!! Some people have style, I don't.....

I told her I had always admired her bike and her style, and we fell into discussion of her bike. She finds it very comfortable to ride, so much so, that after one of the pedals broke, she has been riding it with only the spindle on that side because of difficulty with getting someone to fix it. I told her there was someone locally on Facebook who might be able to help, and although I hadn't got the name I said I'd try and found out and gave her my details in case she couldn't find the person herself.

I cycled on home later and thought what a good few hours I had had all because of cycling, and how, like small children and dogs, bicycles bring people together.

Posted by LizzieL at 18:00 4 comments: Links to this post

Curtains made from an £8 charity shop pair.

Not long after we moved to this house just over two years ago, I bought a lovely pair of interlined Laura Ashley curtains from a charity shop. From this pair I made a front door curtain, and a pair for our bedroom. However, ever since making the pair for the bedroom, I realized I'd made a mistake - the fabric was too thick, and the horizontal join I'd done meant the curtains didn't hang properly. They were also not wide enough and although they covered the window, every time I drew them I had to fiddle about making sure there wasn't a gap in the middle.

Last week I found a lovely pair of good quality lined curtains, in another charity shop, which I knew would go well with the colour of the wall in our bedroom. They were quite large - three widths of the fabric each and plenty long enough for our window. There was also a gathered pelmet; although I didn't need this it means I've got another three or four yards of header tape to stash away to use in the future. And all this for a mere £8!

I used to avoid making curtains, or at least for other people. I was always afraid of not getting the hems straight, or not squaring them up, or not matching up the pattern properly, but then a few years ago my daughter asked me to make some for her, and I decided it was time I faced the challenge..... I read the rules - !! - and bought a steel one metre ruler and a right angled one, and set to work. They were quite successful and I made a pair for my neighbour as well.

I no longer make them for other people, or at least only very small ones, as I simply haven't the space in this house. When I do make them, the whole process involves a lot of crawling around on the floor and apart from the discomfort of that, they might well end up not straight and squared up and while I can put up with that for us, it's not acceptable if I'm being paid for the job!

I was going to just make this pair narrower and shorter, but in the end I decided it was easier to take them apart completely and remake them. That way I would also have a spare width of fabric to do something else with. 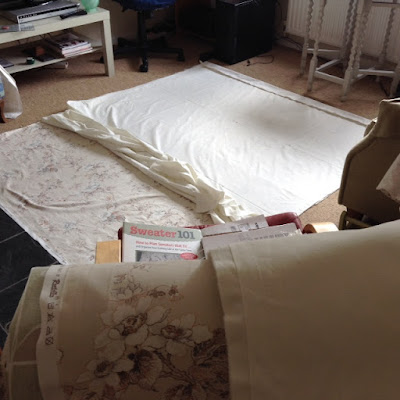 The next day I couldn't quite believe how much my legs were hurting from all the getting up and down! Good exercise I suppose.

It was hard to get good photos of the finished curtains, but here they are - 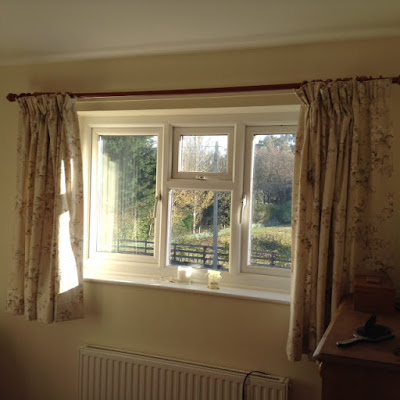 Oh the bliss of not having to fiddle about every night making sure there's no gap in the middle! Once again, it was hard to get a good photo - 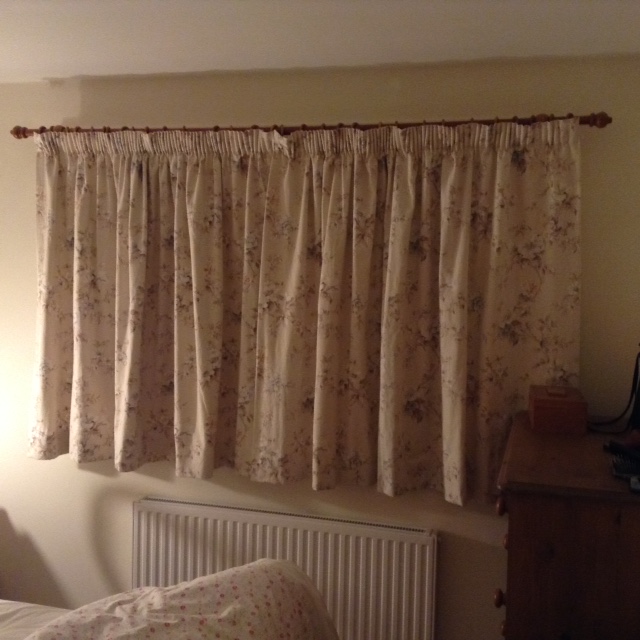 I should add that we then sleep with them drawn back as I like to see the dark sky and to wake up with the natural light. We do get some light from neighbours across the road shining in sometimes but it's not too bad. In fact I hate sleeping with curtains drawn across, which is one reason why I hope we never have to live somewhere with streetlights outside. I'm all in favour of dark skies and think streetlights should be turned off after a certain time like they used to be when I was a child. (There - I've said it!)

I'm actually really pleased with how these curtains turned out - pretty straight and squared up considering how much crawling about on the floor I had to do. Not bad for, as I said, £8!

Posted by LizzieL at 18:00 2 comments: Links to this post