Elderberry syrup, how to make it and what to do with it.

Because the process of setting up this blog involved so many hours spent sat in front of the computer (not my favourite occupation)   I was a little afraid that writing the thing would also involve too much time spent in front of this screen, and that actually doing the things I wanted to blog about would take a back seat. Which if it proved true would be a bit ridiculous....

But I think that having a blog could perhaps have the opposite effect in a way (am I making myself clear?). It did on Sunday anyway. My daughter (the pregnant one, who has already commented that there isn't enough about her on this blog!!) and her husband were coming round for a visit and so after washing up in the evening (we eat early so it was still light) I decided I had time to squeeze in some elderberry picking before they came if I got move on. It didn't take long - fifteen minutes or so to walk across the fields to the spot where I knew there were plenty, thirty minutes or so picking, and back home to find said daughter and son-in-law had arrived early. She came with a tin of her home made cakes of which we partook, with tea/coffee.  [There, I've written a bit more about you, daughter.]

This is the recipe I use:

I'd advise taking a pair of scissors when you go to get elderberries - cutting the stalks off is easier than trying to twist them off.

1 Use a fork to remove the elderberries from the stalks. Don't worry about removing every little bit of stalk as the bits will just stay in the jelly bag later.
2 Place the berries in a large saucepan or stockpot with enough water to cover them.
3 Bring to the boil and simmer for 20 minutes.
4 Strain the mixture through a muslin or jelly bag. When it seems to have stopped dripping squeeze the bag and you will get quite a bit more juice out.
5 For each pint of juice you get, add 1 lb of granulated sugar.
6 Slowly dissolve the sugar, then boil for 10 minutes.
7 Let it cool slightly , then pour into sterilised bottles. Use ones that have a plastic seal.

I got my bottles free by asking a local pub/restaurant to save their screw top bottles for me, which they kindly did. They are 500 ml water bottles. As lots of places serve water in individual bottles these days (ridiculously wasteful) there are plenty of places that would probably happily save them for you.

So, on to the making......and apologies for using both imperial and metric measurements. Am I the only person who does this?

I picked about half a carrier bagful of elderberry stalks, and the next day I forked them off the stems. 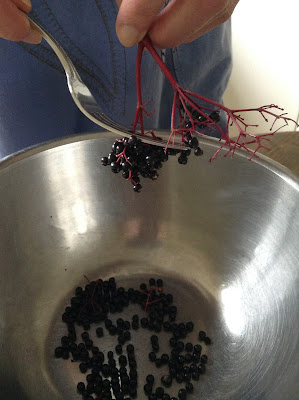 I had 1.8 kg. Then I put them into the largest of my two stockpots, with enough water to cover them. While they were simmering I did my usual rigging up of my jelly/straining bag on this upturned stool, and carefully ladled the elderberries in once they were ready. You can probably see how I dripped the mixture onto the table.....and it does stain if you don't wipe it up quickly! 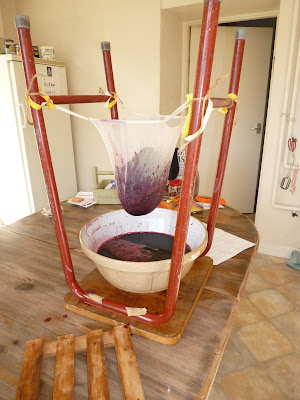 How to rig up a stand for your jelly bag if you haven't got a "proper" one. Why spend money on a proper one though when an upturned stool will do? 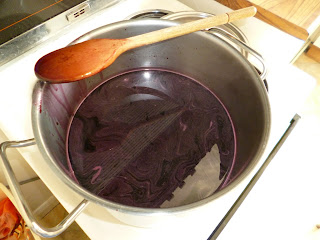 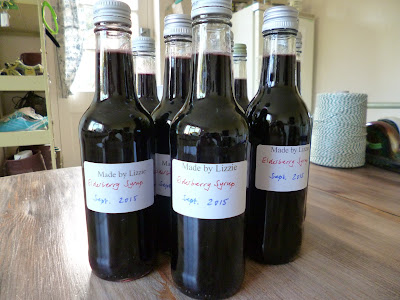 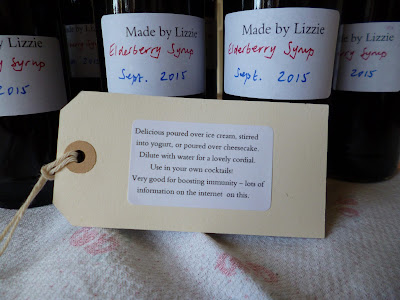 And when it was ready I poured it into sterilised bottles, using my invaluable juice funnel - something I didn't have when I first made this syrup but which makes the job so much easier. I have just found out that there is one you can get with a removable strainer. That would be even more advantageous.

It has a very high hmmmm... factor, particularly when taken poured over lemon cheesecake, my dead easy recipe for which came off the side of a tin of Carnation condensed milk and which you can probably get off their website.


This is a rather badly designed post in terms of getting text and pics to wrap round each other nicely. I hope that by the time I do my next post I will have learnt how to do it better. And I've got to add a "Preserving" tab at the top of the page.

Now get out there and pick some elderberries..... After the first frost I will tell you about making rose hip syrup, which is equally delicious.

Oh, and I would just like to add, in case my husband reads this (unlikely) that while waiting for photos to upload I did some hoovering and rinsed out the mops I'd used for washing AND polishing the elderberry-juice stained kitchen floor.....

Posted by LizzieL at 15:47 4 comments: Links to this post