A weather report from Oxfordshire.........definitely no cycling....

It's beginning to seem like a rather long winter.............. which takes me back to the winter of 1987, when I sat by the fire growing Bump No 3 and reading "The Long Winter" by Laura Ingalls Wilder. I can't remember if that winter turned out to be particularly long, but as you had to sit as close as possible to the open fire in that house to keep warm (in the years before we installed a woodburner, which vastly improved matters) every winter seemed long! I remember the words of the Indian in the book who warns Pa Ingalls of the long winter to come by saying -

The snow we've got here now is in very big heaps in places.

But to go back a bit, on February 6th, I'd ridden into Wantage in the afternoon to do some shopping. I pootled home,  the hour being slightly later than usual but not mattering as the days were getting longer. I was thinking "Oh isn't this lovely! The evenings are drawing out and it feels like spring has sprung!".

However, I had a little niggly sore throat and slight tickly cough, and two days later, while sewing, shivering took over, and that night I went early to bed, only slightly warmed by a hot shower, thinking that this was it - the Aussie flu had flown somehow to rural Oxfordshire. I had been due to go to Scotland to stay for a week with my daughter and baby granddaughter, as her Marines husband had had to go away for a month, but that had to be cancelled.

The next day it didn't seem to me that it was bad enough to be flu (I've had it several times in the past and I remember it as being worse than this) and over the next couple of days I just felt generally unwell and very tired. I thought I was just being rather lazy when all I wanted to do was - nothing. I looked at some boro hand stitching I'd been doing and couldn't even be bothered to lift the needle and thread to do that. However the cough got so bad that when I suddenly developed a sharp pain in the rib area, worse on breathing in, I thought I had cracked a rib, and I then saw the doctor (last patient in the surgery that night) who took my temperature and said -

The rib pain lessened and went away after about a week. After sleeping downstairs for several nights so as not to disturb Husband with my coughing, plus having laryngitis (my voice is still not right) and a smattering of conjunctivitis, I finally felt well enough to go out on the bike again two weeks and two days after that last shopping trip. Once again I was gaily pootling along thinking the same Springy thoughts as before.

But the weathermen had warned us that winter was coming back, and it certainly has! My bike remains in the garage, where the snow has blown in under the door. Husband's shift at work meant he had had three days off, but was due to go back to work today. He set off at 5.45 am, about 40 minutes earlier than normal, to get to work 12 miles away, but despite trying various routes he was back home an hour later as it was impossible to get there from here. A neighbour who works at the John Radcliffe hospital in Oxford got stuck about 200 yards from here about the same time and Husband and another neighbour helped her get her car back closer to home.

Yesterday I went out for a short walk in the morning, and the wind was biting.


Husband and I went out again later in the afternoon. This time I had all the layers on that I'd worn in the morning -

4 (yes 4)  thin layers of wool
1 layer of thickish cotton/acrylic
Primaloft jacket
2 Buffs
Warmest hat (1898 hat - brilliant pattern, I'd printed it off years ago but only got round to trying to knit it this winter)
Winter lined Craghoppers
Over the knee socks
Bontrager lobster claw gloves (recent acquisition, warmer than the Pearl Izumi ones I have on in the first pic)
Leather walking boots
Husband's Rab softshell with hood. 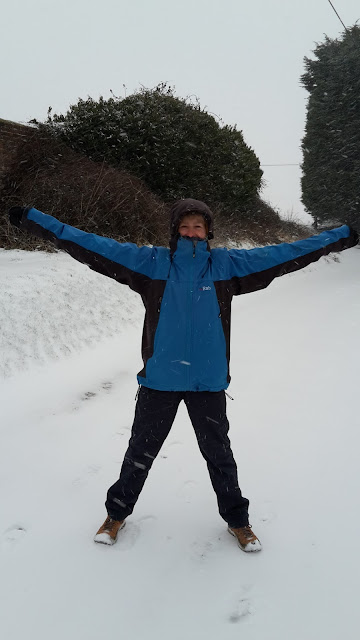 This morning we both went out again, passing Mr and Mrs Range Rover who had got stuck and were being towed, and then went part way up a track to the Ridgeway.

I wore wellies this time, but they're not so warm. Husband's gear of Rab waterproof/windproof trousers with leather walking boots were a warmer combination.

The drifts were amazing and very beautiful. 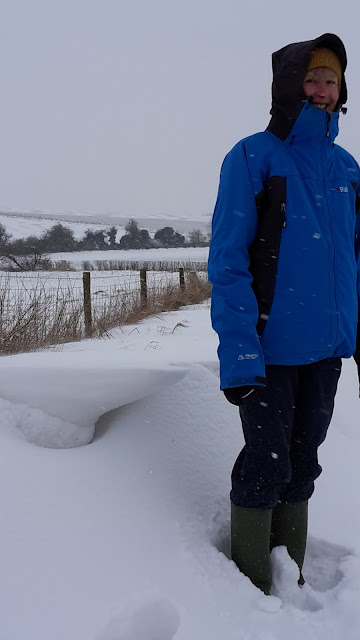 Looking back down the track that leads up to the Ridgeway. 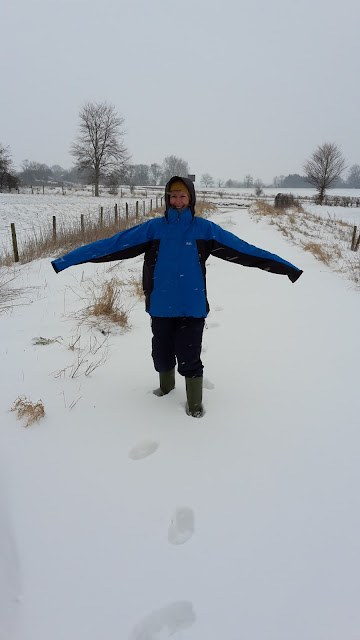 We didn't go much further up than this! I am walking on the side of a track which is about the width of a narrow road, so you can see how much the snow has drifted. 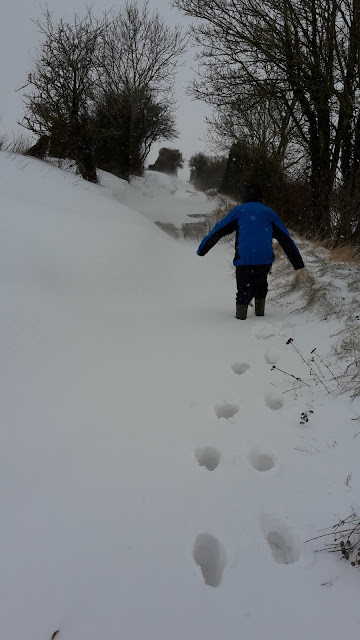 And then this afternoon, we thought we'd go out for a longer walk!! It was snowing  again and when it blew into my eyes it really stung. This time I put thick cotton tights on under the Craghoppers and warmer socks, again wearing wellies, which are hard work to walk far in. We walked about 3 miles, along roads which were wonderfully quiet, and across fields, and by the time we got home I was well and truly warmed up!

I don't think I can remember a winter when temperatures have remained below freezing for so many days. Typical has been -4 degrees C. We have stayed warm in our little house, lighting our inset multi-fuel stove early in the morning. The inset stove was not our choice though works very well. If we ever own our own house it will absolutely have to have a stove! At least then if you lose your central heating for some reason you have some way of keeping warm. Although we have kept our (oil fired) central heating on as well for longer than usual these last few days it is only on very low, and is turned off in the bedroom. We sleep with the window open throughout the winter, although Husband sometimes wants it shut if it is windy as the noise keeps him awake.  We also have a wool duvet which is the best we've ever had! Previously, even with a high tog down duvet, we used to have a thick blanket over the top and tuck a sheet in over the whole lot, in order to keep warm. If you live in a cold house, or just prefer a cold bedroom, I would highly recommend one. Their only slight disadvantage is that they are heavy to manhandle. But apart from the convenience of a duvet when bedmaking, I sometimes wonder why we ever abandoned blankets.........