Back here in a previous post I wrote about the cotton trousers I'd bought for £1 and had dyed and converted to some excellent cycling trousers. I have now done the same with the 50p pair that I bought, again from a charity shop. I have to admit that when I checked the pockets and found a used tissue I did think "Ugh.......maybe I should just throw these out and wash my hands thoroughly......." but I didn't. Please don't feel sick..........carry on reading! They were too good to lose!

I soaked them first in very hot water and soda, then washed them at 60 degrees, then hung them out in the sun to dry. My way of destroying any lingering germs!

The trousers were from BHS, which of course don't exist any more. I would never have considered looking in their shops for trousers anyway, as I thought their clothes were pretty awful....... It just goes to show that you have to think outside the box sometimes - you might find what you're looking for in unexpected places, especially if you can alter it in some way to make it just what you want.

These were the trousers before dyeing - 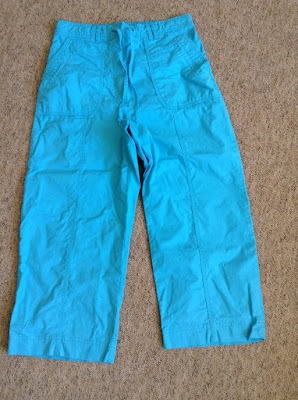 I dyed them a dark blue. As expected, the thread, being synthetic, didn't dye. I added a zip to one pocket, which was much trickier with this pair because having no zip fly to open up the trousers, the space was harder to get to. I actually re-did it as I wasn't happy with the first attempt. Where there is a gap in the stitching on the waistband above is where I opened it up to push the zip up underneath. I have re-stitched that bit, although it's not visible - I wasn't so fussy as to bother to find matching contrasting thread. The zip still looks a bit weird, but as I said, it was hard to get to the space.

The only suitable zip I had was one which I had unpicked from something else, and was cream. When I had finished the job I went all over the zip with blue felt pen to make it stand out slightly less! I wish I could have attached a zip to the smaller pocket as well but I could only have done it by hand and I decided not to bother. 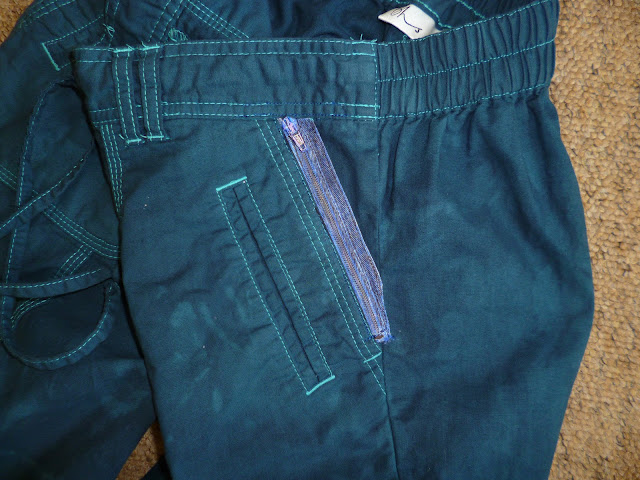 Here you can see that I've added tapes to the trousers so that I can roll them up. 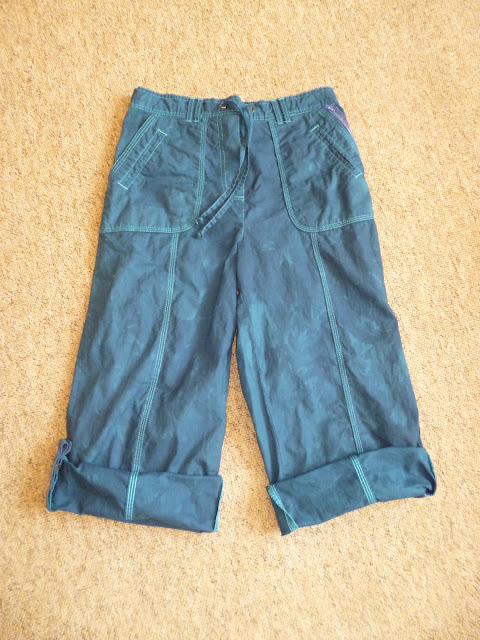 I used some twill tape that I already had - again, like the last pair, I just happened to have dyed some previously in the right colour! 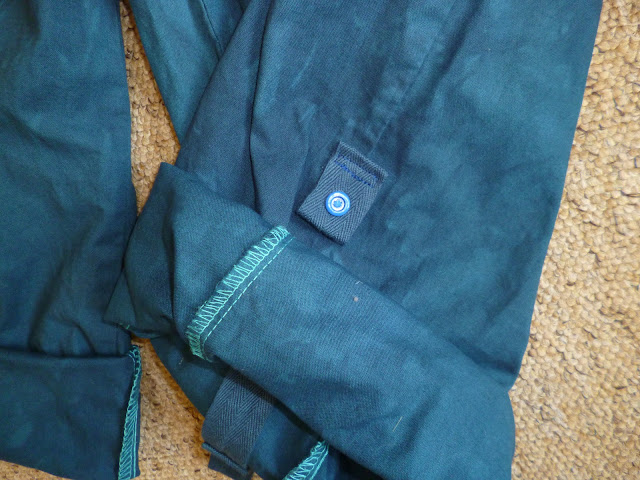 This time I used Kam Snaps to attach the tapes to the right side. If you haven't some across these they are brilliant. They come in a variety of sizes and colours and are easy to attach with the tool that goes with them. My 19 month old granddaughter Lily was quite fascinated by them when I visited one day, and I showed her how they worked. They are actually quite hard to undo though, so it might be a while before she can unroll Grandma's trousers...... 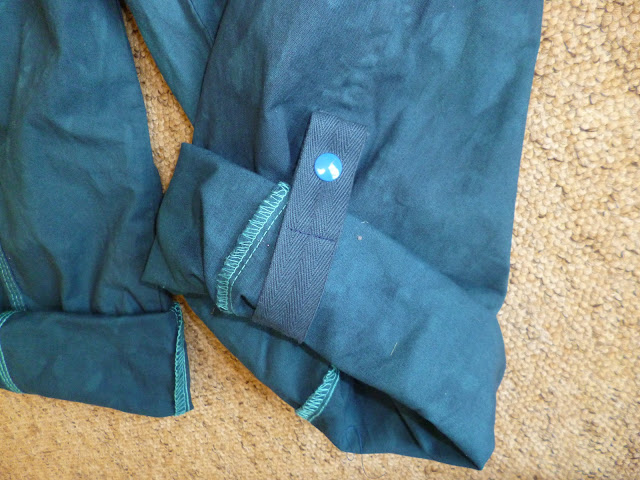 As with the other pair, they are wonderfully comfortable and practical. You may notice that the colour is not even - this is because after the initial required 45 minute period of regular stirring (you don't have to stir for 45 minutes! Just stir "regularly" in between doing other things) I then went away and forgot to stir them again, which has resulted in the uneven colour.

I did actually spot another similar pair recently in another charity shop, but I resisted, as I don't really need a third pair, but it just goes to show that there are plenty of similar pairs of trousers out there dirt cheap waiting to be converted!