With all the news about plastic in the oceans and the news of possible attempts by the government to cut down on this waste, this blog post is quite timely. At the beginning of December I had decided that I would save all the plastic waste that our household of two people produced, in order to see just how much we ended up with. The piles in the photos below are the evidence. It was just starting to overflow the "bag for life" that I had kept it in.

During this time I didn't attempt to reduce the amount of plastic waste that we produce. I just bought what I normally do, although having said that, I have been attempting  to reduce the amount over the years by not, for instance, putting loose vegetables in Sainsbury's into the bags provided. When buying biscuits I had also started noting which ones were excessively packaged, i.e. a plastic tray, wrapped in film, inside another plastic wrapper, and chose ones instead which had less packaging. Have you noticed how it's the particularly yummy ones that come in lots of packaging.........

I also knew that black trays used for ready meals were virtually not recyclable as they could not be detected by the sorting machines, so for some weeks I had been trying to avoid buying these. (I know, I know, ready meals, appalling.......... but we only have them occasionally!). Instead if I can I get them from the Co-op where they do them in green trays. Why can't Sainsbury's and Waitrose then????? Also on that subject, we have tried an EXCELLENT lasagne from Aldi, which comes in a paper case in a wooden box, in a cardboard sleeve. We have a trip to Aldi now and then to buy certain other things too, like their snack bars which are like Nakd bars but even better and cheaper, and also British oilseed rape oil (in a glass bottle) which is about half the price that it is in Sainsbury's.

The only thing that I didn't save was our milk bottles. I'm not sure how much milk we get through in a month, but at a rough guess it must be at least 8 pints for Husband and 4 for me, per week, so that would work out at around 12 x 4 pint bottles for  the month. In fact it would have been more than that as we had our son and his wife staying for a few days. In the days before they were collected in the kerbside boxes, and when we lived in our old house with loads of outbuildings for stuff like this, the only place you could take them for recycling was Tesco's 13 miles away, so I used to store them up and take them when we were going that way anyway. Good job we had a VW van at the time. As we now only have a tiny car I'm glad we can now recycle them at the roadside.

The first photo is the complete contents of the bag - Then I separated this pile into what is labelled as recyclable, what isn't labelled at all, and what is recyclable but only in shops themselves rather than at the roadside. Having said that, I am looking at the photos and thinking - I haven't been consistent here! Because I have got stuff that isn't labelled in more than one pile..... For instance Holland and Barrett bags in this pic which are not labelled - 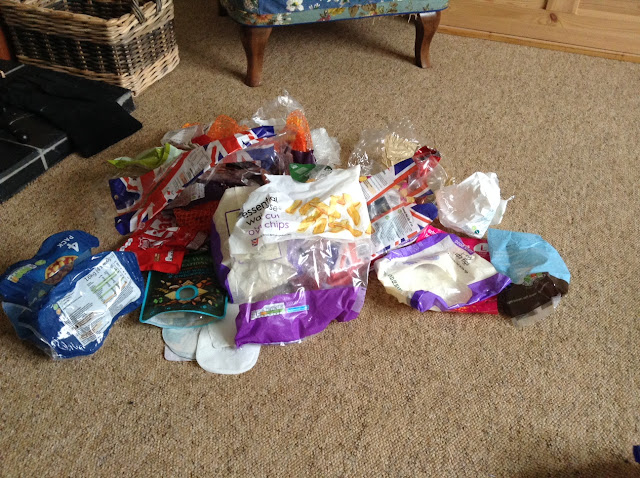 and in this next picture -

plain unlabelled plastic here too, with stuff that IS recyclable. I'm in a muddle myself now! I think my reasoning was that if it's completely plain I will assume (for some reason!) that it might be recyclable and therefore put it in the recycling bin. 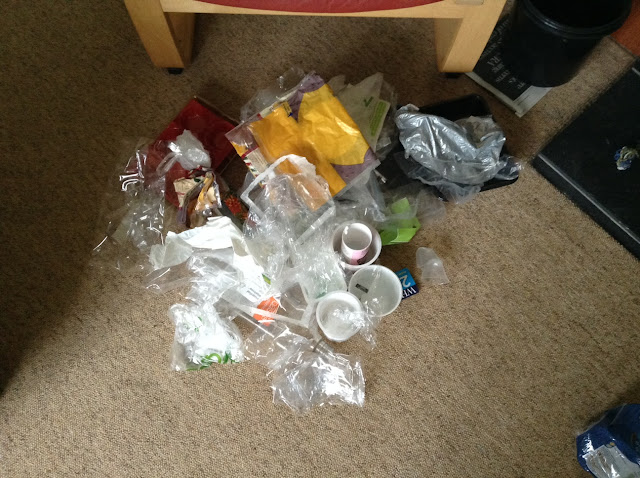 This lot is definitely the stuff that I have to take back to Sainsbury's. 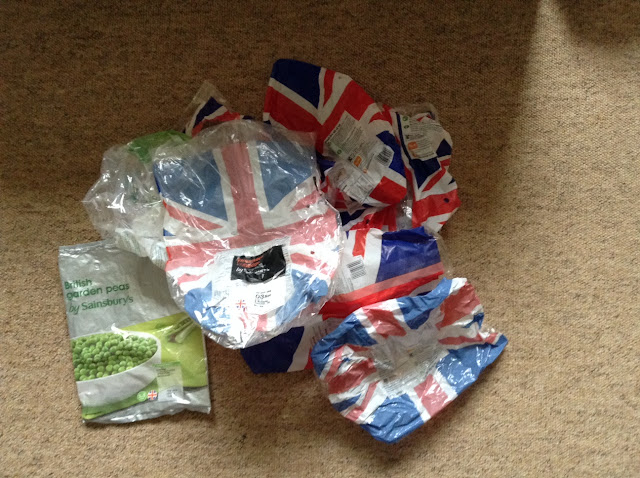 There have long been complaints about how complicated and unclear plastic recycling is, and I think that is one of the issues the government is addressing, and about time too. It just doesn't make sense a lot of the time - I mean why are Sainsbury's frozen peas bags recyclable but Waitrose's are not????

From now on I will be attempting to cut down on the plastic we "consume", but to be honest that will be quite hard, partly as I think we probably already consume less plastic than many other people. So much is wrapped in plastic, often unnecessarily, and often only so that it can be hung neatly on stands in the shops. So much comes in multi packs rather than singly.

I used to continue to buy Ribena in the glass bottles even when they were also doing it in plastic bottles, but they are all plastic now. You can still buy tomato ketchup in glass bottles (it's actually slightly cheaper surprisingly) but how long will it be before that too is only available in plastic ones? Amongst the pile of plastic we had were some tiny bits which I meant to keep separate but forgot, such as the plastic barbs that hold things like socks together. Multiply one lot of those tiny things by all the socks that get sold every year, and that's an awful lot of very tiny weeny bits of plastic probably getting lost in the rubbish or recycling and ending up in those oceans of plastic and inside the fish that swim in them.

I remember when plastic carrier bags first came in. It must have been the early seventies I think, as I was still at school and remember it being rather cool to carry your books to school in one of them rather than one's leather satchel, which had become decidedly uncool....... now look where we are......

Oh and one last thing. I was horrified to learn that there is even plastic in tea bags!!! Actually, for your information, I have been a lifelong user of loose leaf tea, but when Yorkshire Tea stopped doing their hard water tea in the loose leaf version I started buying it in tea bags and then cut them open and emptied out the tea into my tea caddy (which is actually a jam jar). One tea bag's worth of tea does at least two tea pots for me. (Tea making - a post for another day perhaps!!) I put the bags into the compost. Never again. I have now found a suitable alternative loose leaf  tea anyway.

So, that's my plastic confession! What's yours????