A bike ride to Frome, where I get hot and lost. Episode One of Two.

[Apologies that one bit is in red text and one bit is in smaller text than the rest. I have corrected both bits but Blogger isn't taking any notice!]

Why Frome, you may say? Well, interestingly, this town in Somerset - population about 26,000 - was reported recently to be the least lonely town in Britain, but I didn't go in order to find out exactly what it offered in the way of non-loneliness. Neither was it for its quaint and steep streets full of independent shops. I simply went because last year I had been given a Sustrans leaflet about The Collier's Way, NCN route 24, which runs from the Dundas Aquaduct just outside Bath down through Radstock to Frome, and I thought it sounded like a jolly jaunt.

Sustrans says it's "perfect for novice cyclists". Hmmmmm, well........maybe not some bits!! More of that in the next episode.

Is it just me, or do all cycle tourers spend ages planning their trips?  For me the route planning and the booking of accommodation (some B and B and some Airbnb) took several days. By the time it was all done I couldn't wait to get away from a screen and onto the bike. I booked my first two nights and decided to leave a third (or even fourth) night until later.

Once all that was done, the actual packing was fairly straightforward as I've got a spreadsheet of the basics I need to take on bike trips, and where it all goes, whether in pannier main pockets, pannier zip pockets, pannier net pockets, bar bag, or rucksack, and even what goes in my trouser pockets! I like to know exactly where everything is and be able to get to it easily. I don't want to be ferreting around  looking for loo paper when I've just found a nice private bit of woodland in which to obey the call of nature (I don't leave a trace by the way, in case you were wondering).

I set off on Sunday (June 24th)  at about 8.30, using a pre-recorded course on my Garmin for navigation, which does, I have to admit, make things easier - no need to keep looking at the map, and as long as I remember to actually look down at it, I don't go wrong. But I wasn't particularly looking forward to the first 12 miles or so, which in my head I never particularly like, being very windy (that's windy as in bendy, and not windy as in blowy) and full of little hills, and cars that overtake in stupid places, but this time it was fine - as it was Sunday and still reasonably early the roads were quiet. No mummies in 4 x 4s rushing to get the kiddywinks to school......or others who haven't got up early enough and when they see me think -

"Oh drat, a cyclist, and a middle aged one at that. Move over into the potholes woman, I'm coming past!"

No. It was all fine and dandy and I reached my coffee stop, Three Trees Farm Shop and Cafe at Chiseldon, not far from Marlborough, quite relaxed. I couldn't believe how busy it was even though I got there at opening time. It used to be a quite basic farm shop with small cafe attached - now the shop is much bigger with more variety of foodstuffs, and the cafe is large and airy, with outside seating too - perfect for cyclists! It's one of those farm shops that has obviously become quite a destination. After using the nice clean facilities, I joined the queue of about 10 people. Others were already sitting down tucking into a cooked breakfast (which they had probably driven there for) and I was sorely tempted to order one for myself. I never eat a huge amount before leaving home, as I'm always feeling a bit nervous and just want to get going, but always find that about this distance into a bike ride I could happily wolf down a full English breakfast. However, I resisted temptation, not wanting to start spending much money so early in the trip, and just had coffee, orange juice and a snack I'd brought with me.

I sat outside at a table with another couple, and we got chatting. I asked where they lived, and they said -

I sensed a slight dislike of Swindon in their tone......which I could understand. As a child in Winchester I grew up with an image of Swindon being literally grey, because a friend of mine moved there with her family and my mum made some negative comment about it which included the word grey, and ever since then that is the way I have thought of it. It's our nearest big town, where we've often gone shopping for clothes or shoes in the past; it's not actually THAT bad but I have always been glad to get away from it, just as I would any big town. In its favour, it has a row of rather nice old railway cottages, plus my excellent sewing machine man lives there.

It  turned out that this couple had previously lived in a village in the middle of nowhere and found it hard to adjust to townlife. They had my sympathies..........

Last year I cycled down the 7 miles of NCN Route 482 from this cafe, and found it rather boring. It's an old railway line and while this means it's lovely and quiet, there's not much to look at, so this year, needing to travel much the same way, I cycled down the minor roads to the west of Marlborough instead, which was much more interesting, going through three lovely villages all by the name of Ogbourne something.

I later stopped for lunch outside these grand gates, sitting on the wall to eat - 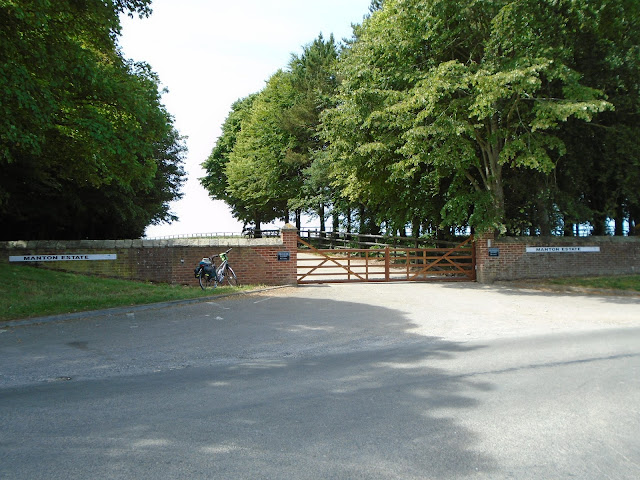 Not long after I'd finished, a couple, presumably the owners, drove through the automatically opening gates, in a 4 x 4 of course, and did not return my friendly smile. They probably would have gone ballistic if they knew I'd not only sat on their wall but also squatted in their woods.....


The advantage of walking and cycling is that you can easily stop at a place that looks interesting. I wasn't in a hurry and so I was able to do just that here, at this fascinating little museum of photographs at Alton Barnes - 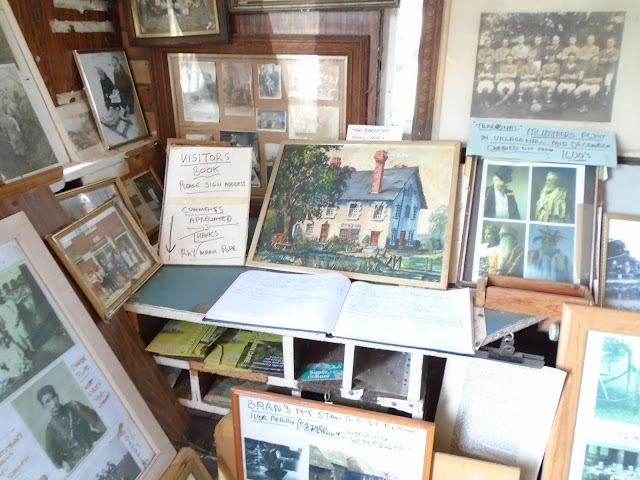 To quote the local paper -


"Ray is well known in Alton Barnes and nearby Honeystreet as he keeps a village and family photographic archive in the outbuildings of his home which is literally overlooked by the White Horse.
The small museum is open every day to anybody who is interested.
Ray said: “My family has been part of this village for hundreds of years and I’m very proud of our heritage and that of the villagers."
Round the back there was another room, with more photos and memorabilia, on the floor, on a snooker table and on the walls. I loved the hand written signs all over the place, full of spelling mistakes, and missing apostrophes. Normally I would be wanting to insert them where they have been missed out, being a bit of a punctuation freak (spot the two errors in the sign by the visitors' book - there, I've just given one away) but here I found it added to the quirkiness, and I forgave the writer. I think it's lovely that someone has created this little museum just for the love of it and to share it with others, and not for any financial reward. As others had written in the visitors' book, I had passed this place before, with Husband, but had not had time to call in. Or maybe it was more of a case of me liking this sort of quirky place but Husband isn't quite so keen...........

Further on, this is how to take a selfie if you haven't got a smartphone (actually I have got Husband's old one, but I usually only use it for the OS maps on it)  - 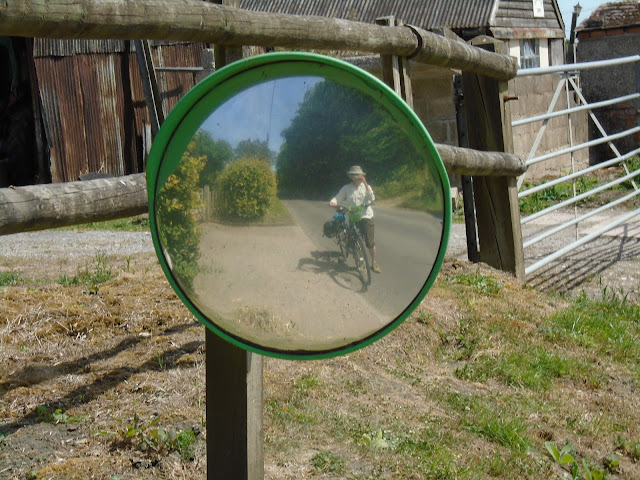 At Urchfont, a very picturesque village not far from Devizes, I stopped in the churchyard in a lovely shady spot, for rest and recuperation. As anyone reading this will know, we have had rocketing temperatures recently, often 30 degrees centigrade or more, and my ride so far had been very hot, although not horribly so. Husband had suggested I wear my Tilley hat when I set off; I had been a bit reluctant to simply because I wasn't used to wearing it for cycling. I also wore sunglasses (£1.99 from Aldi and they are excellent!) for the first time, more to keep the insects and dust out of my eyes than anything else. I got used to the hat, and wore it most of the time once I realized it wouldn't blow off. 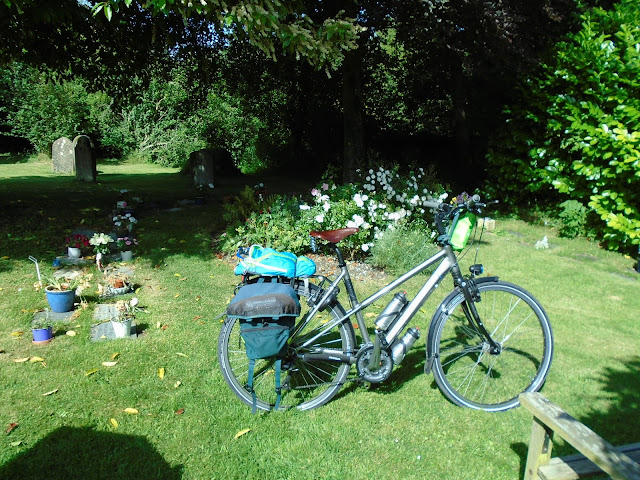 Today's ride was 43.66 miles. That's another obsession of mine - adding up all the fractions of a mile! For a while I stopped doing it , and merely rounded them up or down, but then I thought - nope, if I want to count all those bits of miles then I jolly well will!  It was an easy ride - in fact the easiest of what turned out to be four days of cycling.

I arrived at my B and B, a farmhouse in Potterne, south of Devizes, on the dot of 6 pm, as planned. Spotless,very quiet, lovely walk in shower, and yet, it was missing something. I would say it was missing a certain je ne sais quoi, but actually je sais perfectly well what it was missing - homeliness. Unfortunately I'd left my camera with my bike, which was now locked up in a tack room, so I couldn't take a photo of the rather odd mix of a black blanket on the end of the otherwise mainly white bed, and a black wall-hanging behind the bed (I loathe black furnishings), a large Roman head on the windowsill, and French shabby chic furniture. None of this made for farmhouse style in my opinion. More sort of, er, "boutique"........I don't know whether that word was used in the online description but if it had been and I had seen it I would have been immediately put off. And as for the very large open urn used as a bin in the shower room, well, give me a nice sensible little pedal bin with a lid any day, so that whatever I have chucked in it is then hidden.

I hadn't eaten much on arrival at the B and B, not fancying either of the two packet meals I had brought with me. My home made muesli went down well, but I hadn't got enough milk to eat much of it, so I woke in the night rather peckish, and had to get up to snack on bits and pieces. Maybe I should have had that breakfast..........but at least there would be one in the morning.

Tomorrow - getting lost and exhausted in the heat in Frome (but not lonely).