Attempts at making my ideal (vaguely messenger style) bag - with failures and successes!

Back in the 1990s, Husband and I were invited to a birthday party, and I bought a new dress. It wasn't a dressy affair, more a "down the local football club" sort of affair, so the dress wasn't dressy, just a denim pinafore (honestly, it was fashionable at the time!). The dress lacked pockets. Until the advent of the internet I thought I was the only one that didn't like not having a pocket, but now I know I'm not alone! Where else DOES one put one's hankie? (I never go anywhere without one - I'm reminded of my mum saying "Have you got your hankie?" as I went out the door as a child.) Unless one has a sleeve to stuff it up, which results in a lump. So I decided to make a very small lightweight across the body bag, which would go nicely with the dress, and which would contain my hankie.

Following that I made quite a lot of bags over the years, selling quite a few in the process. They were all my own design - nothing terribly complicated, but I did learn a lot about construction techniques. I can remember following someone and looking at her shoulder bag and thinking "Mmmm, how is that corner made?" and going home and working out how it was done (the boxed corner). There are lots of clever people out there designing bag patterns, and I have the utmost admiration for some of them, because I know just how long it takes to work out how to do something and how to design what you want. This post is all about that process, with my successes and failures.

One designer in particular I like - Dog Under My Desk  (hereafter referred to as DUMD). I have made her Two Zip Hipster bag -

and also recently purchased her Saddle Bag pattern, though I have yet to make it.

Sometimes it is useful to cough up money on a pattern because you do learn how to do things that you might not otherwise and you can use this information in your own bags. I find that bag making books don't contain everything you want to know. Like the zipped front pocket (see comment below on my linen bag!).

Recently I was looking at my favourite bag - this one, made out of an old wax jacket, very suitable for winter -

and noticed that it was wearing a bit where the handles are joined to the body. I'd made this one up as I went along and probably hadn't used the best of techniques. So I decided to make myself a replacement, and set about thinking what I wanted. The Two Zip Hipster comes close, but I've always found it too deep, and while I could have gone through the pattern and altered it to make it less so, it might have meant more work than just designing my own, or rather, adapting various patterns to get what I wanted. As I said, the DUMD patterns are very good, but although they are not difficult to make, and the instructions are extremely well written and photographed, they are quite complicated, and while the PDFs are not expensive (though "expensive" is always relative.....) some have 30 pages or so to print out!  I thought I could come up with something simpler.

Bear with me while I explain what went on my head......

The thing is, that nobody carries exactly the same stuff in their bags, so everyone's requirements are different. I wanted a bag designed around what I carry, and although I might want a little surplus space I didn't want loads. This was what I did want -

"A place for everything and everything in its place!" I think that probably came originally from my Great Grandmother. It's very relevant to one's bag!

5 As I am usually on my bike and it has to be stuffed into my panniers, I wanted the bag to be flexible but strong. I didn't want to have to interface it.
6  I also didn't want to spend any money, at least not until I had perfected my design. Until then I just wanted to use whatever I'd already got.

So, firstly I wanted to work out how to put a zip in the top of the bag in the way I was envisaging (I still don't know if this type of zip top has a name) - 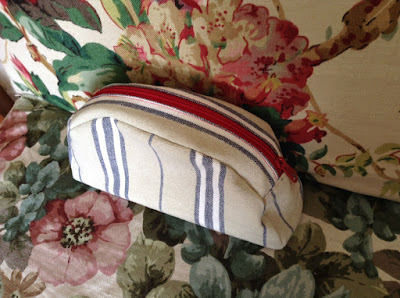 so I made this small bag to attempt to do it. While it looks OK on the outside, I couldn't work out how to line it properly. One attempt and I almost gave up. I thought "I'm fed up with this. I'll just find a pattern on the internet!" Pathetic!!! But then I read a post on DUMD, about how long it took her to design a pattern, and how many samples she made in the process, and I thought "Well, if it's it like that for her too I'm not giving up!"

So I attempted another zip top, which isn't bad but it still wasn't lined and still wasn't quite what I wanted. I'll probably actually pad this one out somehow to use it as an Ipad bag. The fabric I used here was from an old curtain.

Then I made this one, and began to feel I was getting closer to what I wanted. 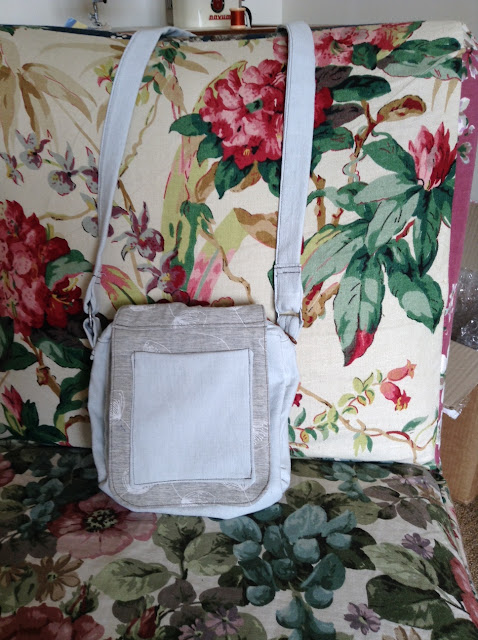 But - it still wasn't lined in the way I wanted. I had actually sewn the lining to the outer, wrong sides together, and then zig zagged the raw edges of the layers after stitching the pieces together. You might say that this is in my quest to avoid a baggy lining, which I don't like. I could have bound the edges, which would have been neater, but binding edges is difficult to get neat when those edges are quite short and have corners (albeit rounded). But this bag at least is usable. The fabric is the old curtain again, plus some oddments from my stash.

Then for some reason, probably that it was more wintery looking, I decided to try another in some woollen fabric I had. This time I used a different method! Rather than stitching a piece round the outside to form the depth of the bag, I used this boxy zipped bag method. You'll need to click on that link to understand what I did next. I used the method described there, of drawing round the four corner pieces -

and cutting them out to leave the final piece, but somehow I managed to get the two pieces different sizes! With some thoughts of "Oh do I really want to do this.....?????" and "Don't expect to achieve what you want without some hard work!", I went back to the drawing board and made the template below instead, to eliminate making that mistake again.

I had altered the measurements to get the size I wanted, and I made it up in newspaper to make sure I'd got it right and that it would work! There's a lot of maths in sewing! You can alter this template to get other sizes. (Although this wasn't the method I used in the final bag, I'm glad I discovered how to make one in this way, as I'll probably use it for some other bag in the future. So it wasn't wasted time!) This was the size template I came up with - 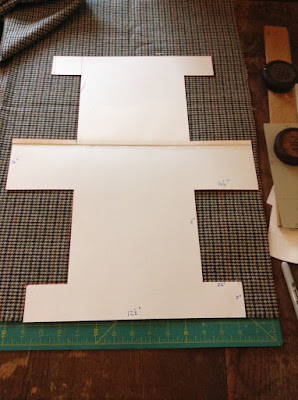 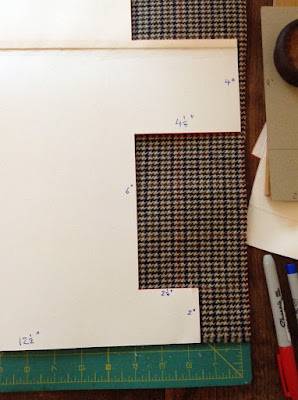 To line the bag, I sewed the outer and lining right sides together, turned them right sides out, and then sewed the whole thing together. I attached the strap and the patch pocket. It looks nice but it's a bit bodged to be honest, and it's not sturdy enough, even though I had used some interfacing. I also decided against using that lining method again. 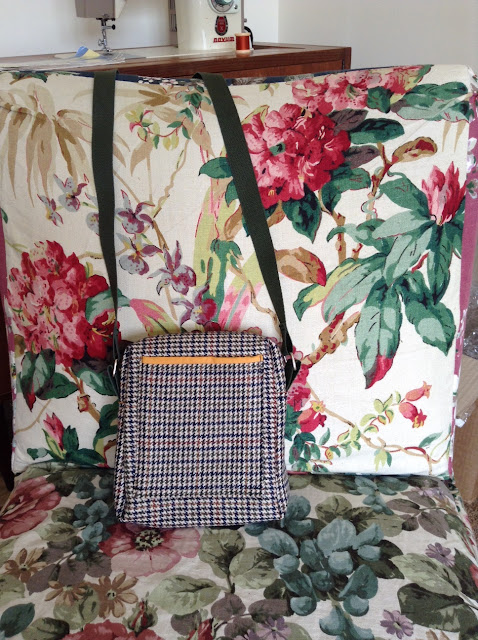 Then I had big rethink, and decided that I didn't want the top zip after all, and that what I basically wanted was my own adaptation of a classic messenger bag (which actually is what my waxed bag is!). I didn't really need a pattern or tutorial but used one anyway - Messenger bag tutorial. It's excellent and it's free. I made it smaller with my own adaptations for pockets. This time I used a lovely piece of thick old linen, which I bought earlier this year at a sale at the convent in Wantage, when I spent £10 on a variety of old and new pieces of fabric. I would guess this piece had been a curtain. It was perfect for a bag - flexible and floppy (but not so much that it needed stabilizing) but strong. I wish I had lots more of it. The colour of course is hardly suitable for winter!

But at least I was getting even closer to what I wanted.

On this one I have attached two dog clips and two D rings to fasten the flap if I want. I sewed them on by hand after completing the bag. In future I'll sew fastenings on earlier in the process. The pen pocket on the outside was unintentional - it just happened as a result of the way I put the pocket on, which was another bodge job, but it worked and next time I'll do it properly. I did not make the strap adjustable, mainly because I didn't have enough fabric.

Another mistake here! Because the bag is mostly lined in the same fabric this was an easy one to make - attaching the patch pocket to the outside (which is done before joining any of the pieces) when it was meant to be on the inside!


I attached the front pockets by basically using the method from the Two Zip Hipster, which I won't explain here (you'll have to buy DUMD's pattern!) but which is very good. I've got the zipped pocket I wanted and one behind it as well. 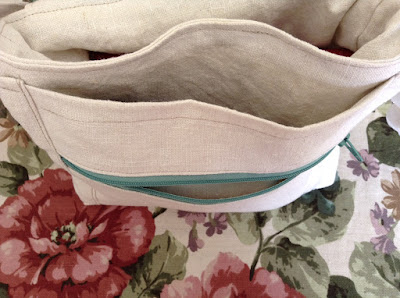 I removed the dog clips!  I found an old bit of leather with press stud attached, probably from an old possibly "Animal" (is that make still around?) key ring belonging to Eldest Son in his teenage years (I never throw such things away) which I sewed on - with difficulty! - and sewed on a tab with a D ring at the bottom for it to go through. 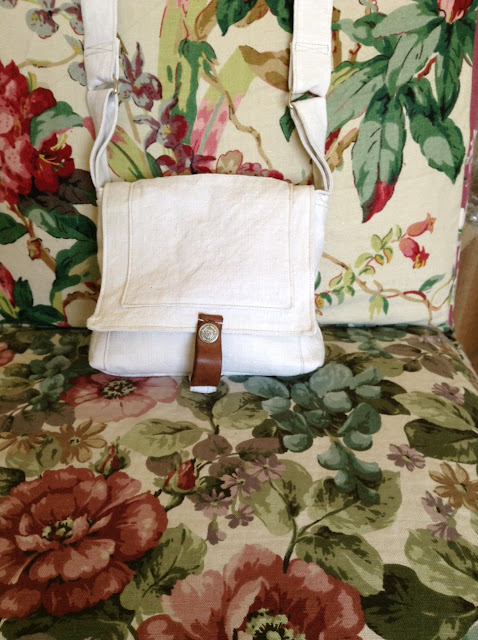 Here's me with the bag (still with dog clips) just to give an idea of the size.

I'm planning another slightly bigger one (I need a tad more space) in denim perhaps, and, very importantly, with the addition of something to convert it into a rucksack, because sometimes when I go shopping on the bike I find I have run out of space in the panniers and can't fit the bag in, so need to put it on my back.

That's quite a lot of bags (some pretty useless!) and many hours of work! But I'm glad I kept going. I have already taken apart a couple of the first bags  in order to be able to re-use the zips. I have also removed the "ball and chain" antique bronze zip on the front of the waxed one as it is such a good zip. I bought two of these years ago at a show. I think I've got a fetish about nice zips.....!

So, "Almost There", as one of my favourite songs, sung by Andy Williams, says.  And yesterday the song "Don't give up!" (I nearly gave this post that title) came into my mind, sung by Kate Bush and its writer Peter Gabriel, even though it has never been a song I'd taken much notice of. I think it might become a favourite!

Posted by LizzieL at 17:00 9 comments: Links to this post