Purl Soho "Quilted Wool Vest" made from an old tent....


Over the winter I have had thoughts of wanting to make some sort of garment to go over my everyday clothes, mainly to disguise them a bit, so that I could wear, for instance, a lovely warm wool cardigan that is a bit on the tight and short side for my liking, but is nevertheless a very useful item for winter wear.

I had a brainstorming session with myself and the internet to find what it was I wanted. I didn't know exactly what I wanted but knew I'd know it if I came across it! The words that went through my head were, not necessarily in this order -

In my search I came across a few garments that nearly fitted the bill, in particular these -

I wanted something really that I could wear all day and not have to change or remove if I went out for a walk or cycle, so, much as I like the longer smocks on this website, I think the short ones are closer to what I had in mind.

You'll notice that one of the words in my list is "tabard" - this can mean either a short garment worn by cleaners etc., or a longer one worn in mediaeval times. I thought that if I could find a tabard (of the cleaner's sort, not the mediaeval sort...) in a charity shop, then I could probably adapt it to what I wanted. Of course it's actually a very simple garment which really I could probably have adapted  from any of my dress or blouse patterns, but as it happened when I next went into my favourite charity shop what do I see but a lovely - ahem - nylon striped one slung over a rail for 75p. So I took it home, took it apart at the shoulders, and started adapting.

I made up a couple of versions (much too basic to deserve the fancy word toile) out of old sheets, and came up with one that I was pleased enough with to think of making it up in a decent fabric. But meanwhile, I had come across this on the Purl Soho website -

And their earlier version here

And I thought - "Ah! Maybe I'd like to make one of those..........." You can download the pattern free and it is only 11 sheets of A4. I would not have bothered with it if it had been one of those that has reams of sheets of A4 to print off!Too much printing, and cutting up and joining of pieces!!

If I was going to make this then I intended to make a trial version first, but one that was nevertheless wearable, and didn't want to spend a penny on it (sorry about that rather unpleasant picture that is no doubt now in your head....). I looked several times through my boxes of fabric and the only thing that I had that I had enough of, and that might produce something wearable, was some blue canvas which had once been Husband's boyhood tent! I think I've mentioned it before - when we were moving house in 2016 and clearing out everything, I found it in our outhouse and asked him if I could have it to cut up and maybe sew with, and after some deliberation he said yes, at which point I quickly got the scissors and started hacking before he could change his mind.

Do husbands ever let anything like this go without deliberation, even though they've had it for decades and are NEVER going to use it again? I mean, I ask you, a tent probably 45 years old.........was he really ever going to camp out in that again?  I was surprised that it survived the 60 degree wash I gave it.

For the wadding I used some curtain interlining that I had been given (pre-washed) and for the binding and the pockets I used bits of a denim dress I bought ages ago in a charity shop for £1.

Here are the results -

The pattern is multi sized. I traced off the size (the second smallest) that I thought would fit, so that if it didn't I would still have the pattern to trace off another size.


I should say here that I am not a quilter by any means! I know some of the rules, but basically I just make up my own as I go along. I was very pleased with how the quilting went. The instructions say to use a walking foot if you've got one but I haven't, for either of my main machines, so I just sewed very carefully, and found that the upper layer of fabric did not move much at all. I was using my Singer 201 incidentally.

Here I am trying it on before binding the edges. At this point I thought that the back of the armhole was bagging out too much, but I couldn't do much about it at this stage without ruining the look of the thing. I also thought at this stage that I should have made the next size up, as it did seem a bit tighter than I wanted, but I carried on anyway, although I did cut the armhole deeper by about 1 " as that was definitely too tight.

Before you shout - "The pockets aren't level!" - I know! By that stage I was getting a bit too pleased with how things were going and didn't take enough care to get them right. I think I actually hemmed them incorrectly. Incidentally I made them slightly bigger than the pattern said. 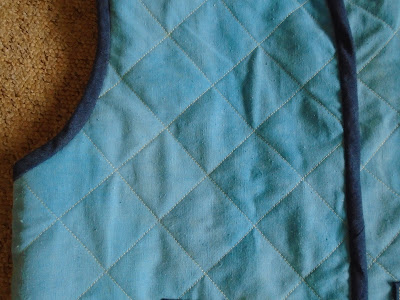 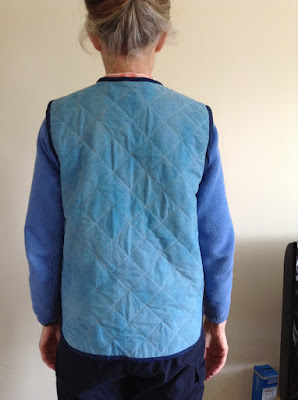 I did think about putting a zip down the front, rather than the press studs in the instructions, but I didn't have a suitable open ended one in my stash so instead used three of these ancient press studs which I had acquired from somewhere - 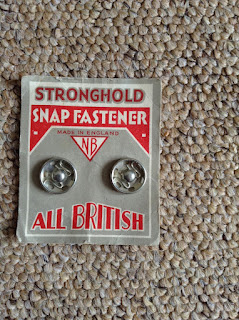 I am really pleased with how this turned out and have worn it a lot. I have often wondered why people wear this sort of garment but now I am a convert! It gives extra warmth on the upper body which I think is often where you want it. I don't necessarily need the extra warmth on the arms. I now think that the size is good - it is quite close fitting but I like the fact that it holds my others layers close to me. I can also wear it easily underneath my warm cycling jacket. I might consider making the next one slightly longer at the front, in order to cover up the too short cardigan when I wear it!

It isn't quite what I was thinking of when I started out on this quest, but isn't that often how things work out? You go down one path and veer off down another....... I still aim to make up the adapted tabard pattern when I can get hold of the right fabric either free or cheap.

One of my favourite online fabric shops, the Organic Textile Company, is currently awaiting a delivery of pre-quilted fabric. I have not found much pre-quilted cotton fabric available in this country. They previewed it weeks ago and it looks lovely. They told me that they had had problems  getting it, but it's on its way now. It would be lovely for this garment, if you didn't want to quilt your own.
Posted by LizzieL at 18:00 1 comment: Links to this post