When I started this blog I did not intend to put anything particularly personal in it - it was just going to be about sewing, cycling, making preserves and probably quite a lot of stuff along the lines of make do and mend. But I felt that if I could get this problem out into the blogosphere, then there might just be someone else out there that could be helped by discovering that other people suffer from it too. And maybe someone could help my son too.

As the post title says, our eldest son (I'll call him Jake though that's not his real name) has a severe health problem. He lives in Germany so we don't see him all that often, and it has only really become apparent through bits and pieces that we have gleaned from social media. Facebook sometimes, and also Strava (which I've mentioned in other posts) - a site that a lot of runners and cyclists use. I began to notice that his friends (and followers on Strava) were making comments about his behaviour. His fiancee would write jokey things such as "Man flu's got my man again", or "Any ideas on what's good for constantly feeling under the weather?". Eventually I realized that these comments were code-speak for the problem.

We began to think that there must be something seriously wrong. Jake's a very keen cyclist and these "attacks" of his would always happen just prior to an event, or even immediately before some sporting leisure activity with friends. We began to think he should take things easy for a while and see if that helped, but he just wouldn't listen to anyone when they tried to give advice.

Before I name the problem, what makes it even more worrying is that one of our sons-in-law has said, in a very roundabout way, that he thinks the problem affects the whole family. We are obviously very worried and are thinking about having genetic testing done. That son-in law is finding more and more that he is looking out for signs of the problem in his wife, and baby daughter.

Anyway, here goes (should I be writing about this, or not?) - the problem I hardly dare name is

Oh gosh this is really hard to admit, especially when it could be genetic........the problem is......

Wow - there, I've said it, and already I'm feeling some relief at finally getting it off my chest.

He basically pfaffs around with his bike prior to any event, as I said. He will pfaff around with any bit of his bike that looks as if it might benefit from some pfaffing. You just can't tell him "It's OK, Jake, you pfaffed with it last night, the whole bike's perfect, ready to go" - he just won't listen. I've had his fiancee sobbing down the phone to me, or worse still Skype sobbing, asking what she can do to help him and was he like this as a child? To be honest, I think as I look back that I could see the signs at quite an early age - at least 10 or so, when he used to do mountain bike races. Sometimes though,  if he was unable to pfaff for some reason, he would behave in some other strange way to compensate. Once he drew cartoons at the side of his GCSE English exam paper - his teacher was very angry, but I realized that it was because he hadn't been able to pfaff before the exam; he'd ridden to  school that day but as he was late he hadn't been able to carry out his usual post-ride pfaffing. His frustration had manifested itself in this stupid form on the exam paper. Actually the cartoons were really good and I thought her reaction was way over the top.

On a recent bike holiday in Spain with a friend, I spotted the signs in the Facebook photos. They looked innocent enough - the bike in the bedroom (obviously for security reasons), the bike in the shower (obviously for cleaning reasons), Jake kneeling down beside the bike, Jake pointing to his bike with a big grin on his face  - and an awful lot of oil on his hands. I could tell that there had clearly been a lot of pfaffing going on behind the scenes. I think the fact that his friend put these photos on Facebook was in truth a desperate cry for someone to notice and do something.

So - what to do? I had to try and come up with something. It seemed more than just coincidence that last week I bought this book in a charity shop for 20p - 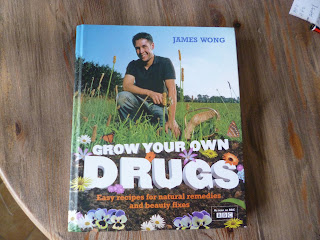 There was nothing listed specifically for pfaffing but I did find something along similar lines, and so I added a few ingredients from here and there (the garden, the ash heap, the "food for recycling" jar) and made it up. Here it is: 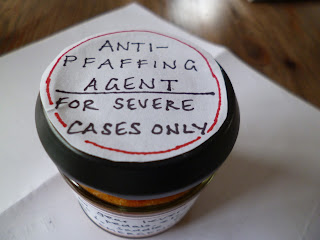 The instructions I wrote - 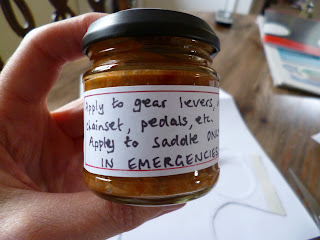 Apparently James Wong's recipes improve with time, especially if left out in the warm sun, so I'm hoping that the few days' journey by post to Germany will make the agent more effective. I'm addressing it to his fiancee (wedding's in October, hope she doesn't give up on him before then....); she is a dietitian by training so she's probably got some medical know-how and will administer it properly, albeit to the bike.

The idea is that if it is spread on bits of the bike that Jake would normally pfaff with, then it will stink so much that he won't go near those bits, and therefore won't pfaff with them. If he's in a really bad way and simply is not fit for cycling, then by applying it to the saddle he won't even be able to get on it without sliding off, or without someone looking at his behind and thinking he's bricked himself.

I honestly don't know if this will help, and if other members of the family do turn out to be affected, then other solutions will be called for as apparently the problem manifests itself in a variety of ways - not always pfaffing with bikes, but sometimes something as simple as just pfaffing around prior to going out of the house - you can imagine the sort of thing "Where are my shoes/keys/mobile/bag/is my coat free of cat's hairs/is there dandruff on my shoulders/are my eyebrows tidy/do my armpits smell?"

If you have been affected by this article, then I'm sorry but no, there isn't a hotline you can ring, but please please leave a comment and maybe we can help each other get through this pfaffing thing (I'm beginning to wonder about myself actually....it took me half an hour to get out of the house this afternoon). And if you are in any doubt as to the genuineness of this complaint, then I can assure you

THERE IS NO KNOWN MEDICAL CURE

Thank you so much for taking the time to read this.