Singer 3105, and the Apollo bobbin case


In my post about the Singer 413 a while ago, I mentioned that I had this machine to work on next. A lady had bought another machine from me and said "Would you like an old one I've got in the attic?" Yes please!

This is it on the kitchen table, preventing us from eating like civilised people should, i.e. at the table..... 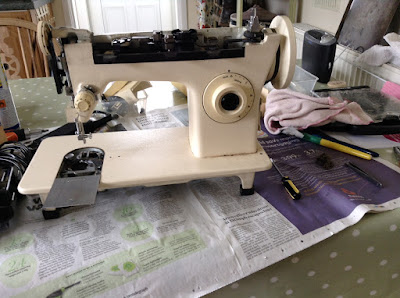 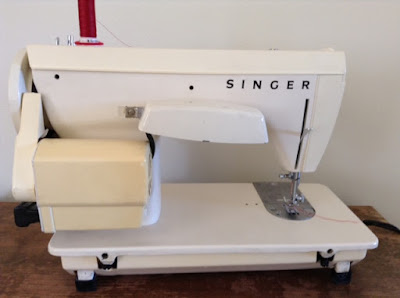 There was a slight crack in the clutch wheel but it didn't affect anything. 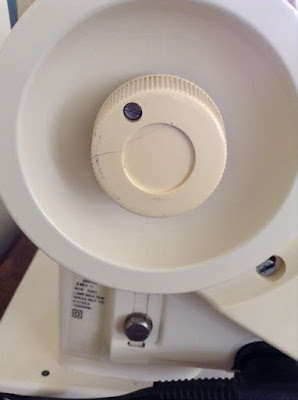 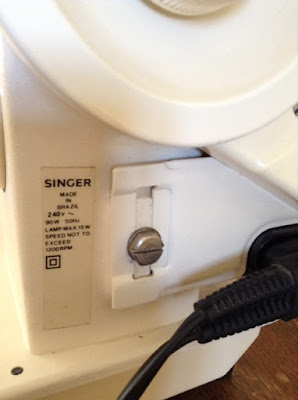 And afterwards, ready for sale. 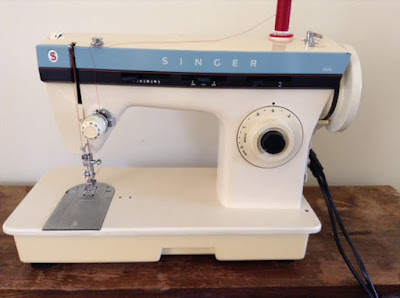 This one is made in Brazil, and is the first one I have had that was made there. Getting it going was fairly straightforward, being mostly just cleaning and oiling. However, I did have a bit of a problem with the tension, as I had had with the 413, which I had not managed to get quite perfect, so I wanted to take the upper tension unit off and check that it was clean and working properly. I couldn't at first work out how to get it off, but with some advice from the Vintage Singers group (now on www.groups.io) I worked it out - a little bit of levering with a screwdriver and the front of the unit came off. I cleaned it and put it back on.

I then investigated the bobbin tension. Both this machine and the 413 have the Apollo bobbin case. I realized that the two metal parts that create the tension weren't doing their job, and that that was why I couldn't get the tension right, so I ordered a new bobbin case, which cost about £4.95 plus postage. The price of these bobbin cases varies a lot, from even less than what I paid to about £13 if my memory serves me correctly, which made me a bit suspicious. I decided to order mine from what I thought was probably a reputable sewing shop, BSK, rather than some random place on Amazon,

In this picture, the new one is on the left, and the one from the 3105 on the right. The photo isn't that brilliant so I hope you can make out what my arrows are indicating, which is that the outer tension spring is not tight to the other metal piece (sorry, don't know the name of it...) as it is on the new one. I had not been able to get it tight however much I had tightened the screw, so the thread wasn't held in tension. 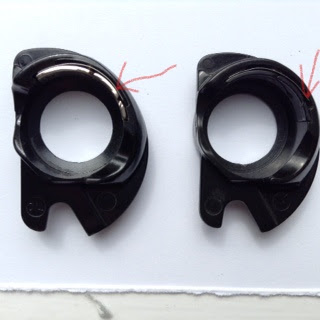 When the bobbin case arrived, I put it in the machine. At first it appeared to fit but then I realized that it didn't. It did not sit absolutely level in the machine. When I looked at the two bobbin cases, the original one and the new one, I couldn't see any difference at all, even with a magnifying glass, but knew there must be, so I emailed the company, who said I could return it for a refund, though I don't think they understood what I was saying, and thought I'd ordered the wrong bobbin case.

Then along comes Husband, takes a look, and finds a difference. Typical...... I didn't manage to take photos of the difference, but basically there was just a slight difference in the shape of the case underneath, preventing it from sitting in the machine properly. He tried to modify it, with the aid of a file, but without success. So I remained at the kitchen table and fiddled about.........

I removed the two metal pieces from both cases. At this point I did find a tiny piece of fluff between them on the old one - that alone could have messed up the tension. I knew it hadn't been just that, but even so it just goes to show how despite thinking I had got the bobbin case clean I hadn't, and it was only by taking it completely apart that I was able to. I could not get both new pieces to fit into the old case, but I managed to get just the new outer tension spring into the old bobbin case, and hey presto! Problem solved! I got good tension.

I should add here that I thought that the two screws in the bobbin case - one for adjusting the tension and one further along, were the same, but they are not! One is very slightly longer, and one hole is very slightly bigger. I have to confess here that I am writing this up several weeks later and I can't remember which screw went in which hole (should have written better notes...) but just be aware if you ever take one of these bobbin cases apart that the screws ARE different, and take note of which one goes in which hole.

Another note on these Apollo cases - when I was researching how to get the top tension unit off, I came across this video on Youtube. It's quite a useful video. At about 8 minutes in the man talks of there being three different types of these Apollo bobbin cases - made in either Brazil, Taiwan or Poland. He says to try and get the right one for where your machine was made. I don't know if this is correct, but if it is it might explain why a generic Apollo case won't necessarily fit all Singers. I did see comments on Amazon from someone who had bought one and it hadn't fitted.

So, another machine was on the road, and I sold it pretty quickly.

And another one has come along.......... I have just bought a Singer 411g from a Facebook selling group.

Now, shall I go and sew, or try to change my bike pedals all by myself?

[Note re Bloglovin - I recently deleted my account with them, as I was getting some rather dodgy people following me via there. I am now wondering if this has stopped some readers from seeing that I have written a new post. If you think this might be the case for you, then please let me know. I am not the best at managing this sort of thing.]