I bought this machine last year in a charity shop and have finally got round to looking it over. 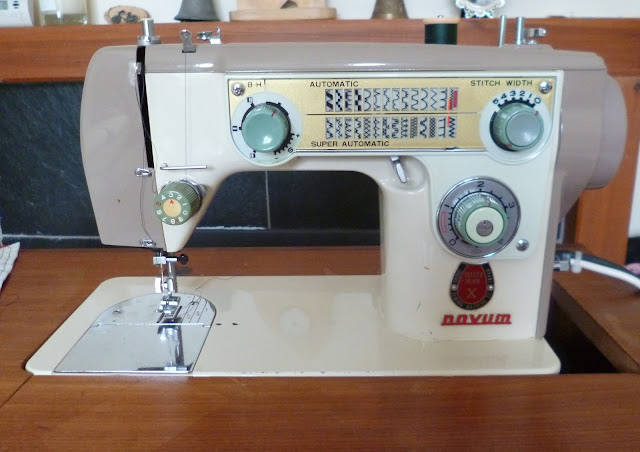 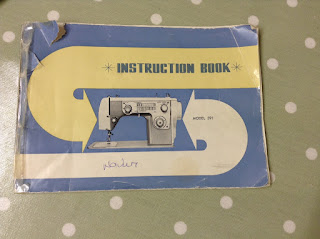 Rather infuriatingly, it has been very hard to find out much about it. It's bit of a mystery machine. Google comes up with precisely two images, one of which is this machine itself! It was clearly advertised for sale before it was given to the charity shop. I know it's the same one as I can tell from the marks on the table. The other image is of the same model machine but as a table top. Interestingly, a fellow blogger told me that she had one of these machines perhaps 40 years ago. That certainly ties in with the original advert for the machine which said that it dated from the 1970s. Often there is a date in the manual which gives you some idea of when a machine was manufactured but the manual with this one has no date. Neither can I trace the serial number as there is no listing for machines this modern.


The feet and accessories - 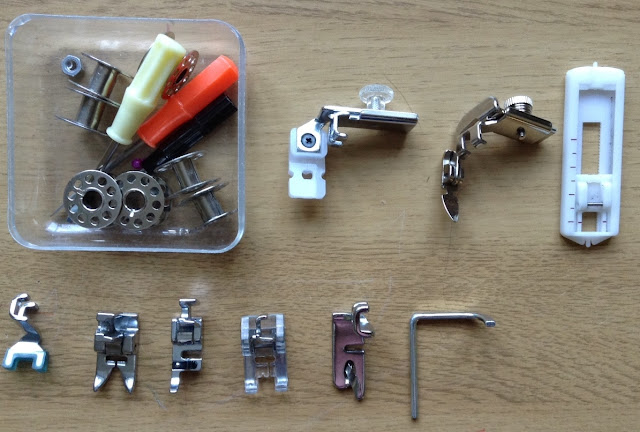 The five feet on the bottom row are all shown in the manual, although strangely they do not all have quite the same attachment fitting, though they do all fit. The zip foot on the top row is a different one to the one pictured in the manual, although this one also fits. The cloth guide and the "blind stitch hem guide", a piece which attaches to the blind hem foot (third from the left, bottom row) are both missing.  The foot on the left of the top row is an invisible zip foot, which I will be hanging on to as I've never had one. You don't actually have to have one of these to insert invisible zips but I'd like to try one out. The foot on the far right, top row, is a buttonhole foot but not for this machine. The piece on the bottom right is for quilting parallel lines; it attached to the zip foot pictured in the manual, but doesn't attach to the zip foot with the machine. The straight stitch foot is currently on the machine hence not being in this photo. So, a bit of a mixture but all the essentials are there.

The machine was pretty clean so I didn't need to do an awful lot to it, although I like to do as good a job as I can so I did fuss around cleaning it wherever I could get to. Then I oiled it everywhere where oil should go. After that I tried out all the stitches, and everything works well.

It runs extremely smoothly and quietly. (I have to admit to having a bit of a thing about the sounds of sewing machines - I enjoy listening to YouTube clips just to hear the sound they make!) The lever that you move to get the different stitch patterns takes a bit of getting used to because as you move it the red bits behind the display move with it but they don't always match up exactly to the stitch shown, but it's just a question of getting the hang of it.

Unfortunately I cannot get the light to work even after trying a new bulb, and I'm not sure why. The wiring is in very good condition but maybe something is not connecting somewhere. According to the manual there should be a switch on the back of the machine, but there isn't, so I assume the light is supposed to come on automatically when the machine is turned on, but it doesn't, so that is another mystery. I have the same problem on my Bernina 801, the light on which was working when I bought it (after having been professionally serviced), then only worked if I pushed the bulb in and jiggled it slightly, and then stopped working altogether. I'm not skilled enough to find the answer although my curious brain is constantly mulling it over - rather unsatisfying to have to leave something not working!

Last year I bought a black Singer 201 in a table and realized how incredibly useful it is to have a machine in a table rather than on top of a table, giving you a nice big flat surface to work on. This table has four drawers in; my Singer Library table is very nice looking but has no drawers. But here's another mystery -


Here we have the machine folded down into the table 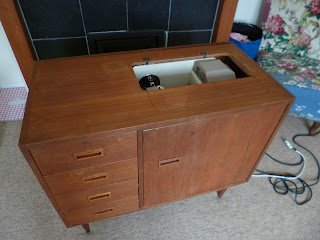 And here it is with the top on -

I have only ever seen tables where the flap unfolds to the side, but this one slides down the back! The flap stops at the bottom of its runners but the plastic piece which once held it in place close to the back of the table has broken. It would be fairly easy to fix something else in place to hold it.


Perhaps this model of table was intended to be up against a wall, and the flap was not intended as extra workspace. However it could easily be converted to attaching at the side with hinges and giving that valuable extra workspace, in which case there would be no need to fix something in place of the broken plastic thing.

And one last photo, of the inside - 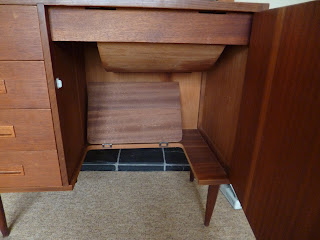 So, a very nice machine and now on the market for £50! 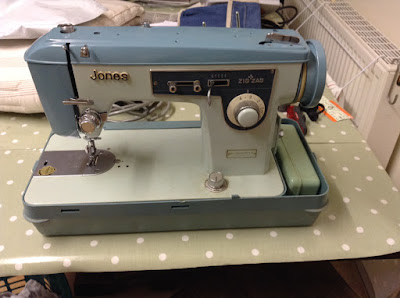