Today's was another Coffee without Walls trip. It almost felt like cheating to squeeze 5, 6 and 7 in on the last 3 days (it wasn't though!) but I knew that to feel I'd really met the Coffeeneuring challenge there was only one place to cycle for #7, and that was White Horse Hill, near Uffington. The weather forecast was rather grim and there was a conversation in my head between me and my weaker side which basically went

"Do I really need to cycle all the way up there?"

"But surely there's somewhere else I could cycle which would be equally valid but which wouldn't involve all that climbing?"

"Don't be such a woos - on yer bike to White Horse Hill!"

So I did. I've never actually cycled up there before. I took a route which meant less of the very windy and narrow B road that passes by the hill, but which meant more elevation.

Once up there (and I confess to having had to push up the final steep road to the Hill) I sat in the car park and ate my provisions and drank tea from a flask.


When I make tea at home, though I say it myself, it is excellent (Yorkshire Hard Water loose leaf) but poured into a flask and drunk an hour or so later it is yuck! However it was hot and vaguely tea-like so I drank most of it.

The weather was indeed grim but at least the rain had cleared off to the east by then. It was grey, cold and quite windy.

This pic is looking north to Faringdon Folly. 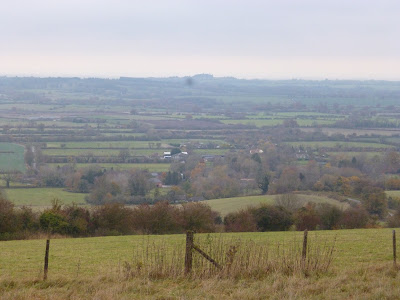 I got somebody to take this pic later when I cycled from the car park up onto the actual hill. 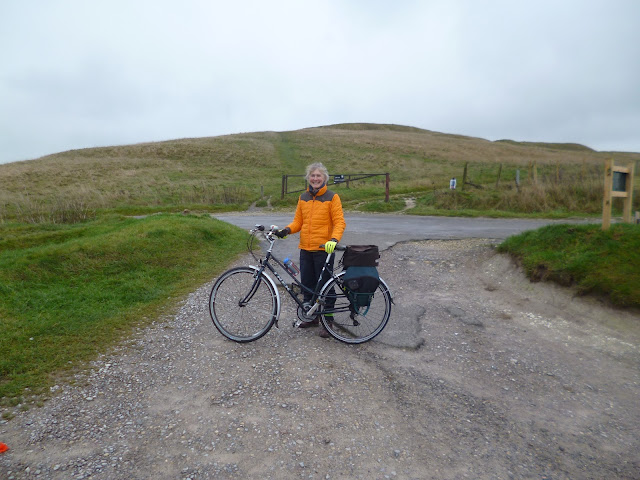 After cycling back down I was going to just pootle off home but by then I felt up for a bit more of a ride, so I headed off towards Shrivenham, and ended up doing about 21 miles. It was very tough going and I was very glad to get home, but these last three rides have made me realize that cycling can be very enjoyable even in this sort of weather! Better than being in a tin box on wheels!

And now, I shall submit my 7 rides to the appropriate person and get my badge, shown here, which I shall proudly stitch to my jacket!