To the Thames again, for the last Coffeeneuring trip, #7

It wasn't until the morning of the day of this trip that my plans for it were finalised. But that was OK -  plans are useful but you don't have to stick to them!

Going along with my watery theme, I had thought about cycling to the Thames at Abingdon, but knew that the scenic route I would take would make it just a tad on the long side for these short days, so I looked at the map and decided instead to aim for Culham Lock, a few miles south of Abingdon. The route was to be through West Hanney and Steventon - but as I wasn't taking a flask this time - where would I get coffee? Problem! So I hatched a better plan on the morning of the day itself, and decided to change the route entirely, meaning I could have coffee with Daughter No 2, and Granddaughter No 1, at The Grocer Chef, Ardington's village shop and cafe, en route.

The forecast was for cold but sunny, and it certainly was both! I wore the same multitude of layers that I did for the previous chilly ride, but this time wore my warmest gloves - Pearl Izumi Elite. At 9.15 a.m. when I left it was 2 degrees C, and I must admit that even with these good gloves on, the ends of my fingers were chilly for those first seven miles or so to the cafe.

So here we are at Ardington - 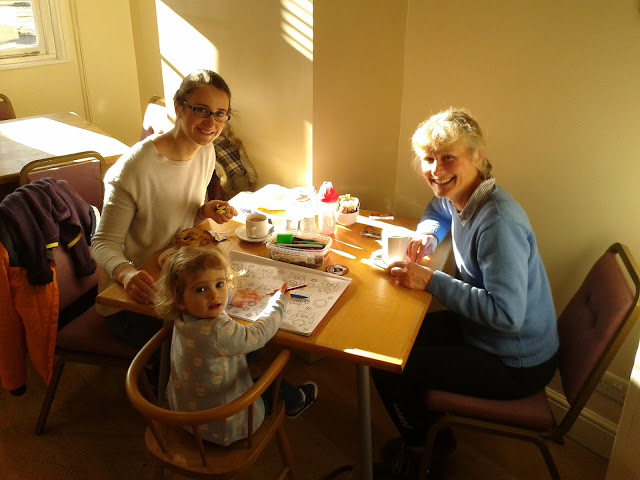 I had an Americano (9/10 on my coffee grading scale - would have been 10 but the mug could have been a bit fuller!!). Granddaughter was offered a colouring book and box of pens and crayons, which she loved! I drew a few cats.....


After this D and GD went to the playground, and I pedalled off, but I went in the wrong direction, and on cycling back GD saw me and called out "Mandma!" (rhymes with Grandma) so I stopped and walked with them for a bit. As I said in my last post, I always get in a muddle round this area east of Wantage, but eventually my navigational skills improved and got me onto NCN Route 5. Near East Hendred I explored a bridleway that I had often noticed from the car, meaning that I only had to cross the busy A417 instead of travelling on it. I love finding these little safer shortcuts.

I knew that this ride wasn't going to be the most scenic of routes, but I wanted to explore some of the shared cycle/pedestrian paths that connect to Didcot, perhaps thinking of one day taking my bike on the train from there. I have previously cycled to Didcot using Route 5 all the way, but I thought it must be possible to shorten the distance by using these other shared use paths from the Milton interchange. I wasn't intending to cycle right into Didcot today, but was aiming to go across the Milton interchange north to Milton itself, and then on to Sutton Courtenay and Culham Lock.

My next stop was for lunch here, at the newly built Great Western Park in Didcot, with the power station in the background, and the noise of heavy traffic just near that fence - 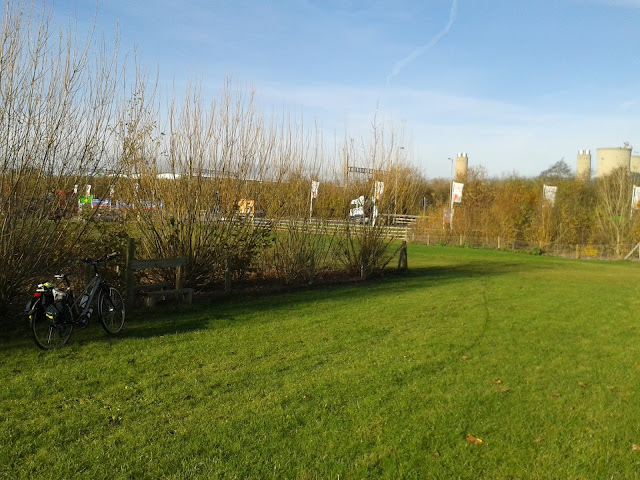 However, like the plonker I am, I'd already gone wrong...... I'd missed wherever the crossing was to  the Milton road. But hey ho, I'll find it another day! That meant that I did have to cycle on nearly into Didcot to find the path, but it also meant that I discovered that cycling against the traffic - fast cars and heavy lorries - albeit on a good and wide shared use path, is not at all pleasant, and I could see why people might not want to do it. In fact, come to think of it, when travelling this way by car, we don't see that many cyclists on this path, going in either direction.

Another advantage of having missed my crossing to the Milton road was that I did cycle past this highly salubrious watery place! -


Route 5 (horribly littered here, sadly) takes you past here, and you can certainly smell it before you see it! Recently Husband and I had walked past, and a party of schoolchildren were just going in, no doubt for an educational tour, and I actually wished I could go with them! I think we should all know what happens to our, you know, pooh..... just like we should all know what happens to the rubbish we put in our bins. That's another thing I'd like to do - have a trip round a waste collection/recycling site.

All these extra miles meant I was beginning to think I might not have time to actually get to Culham Lock, but fortunately it wasn't much further. Route 5 takes you round the back of the power station and is actually a very pleasant path to ride, and a good surface too.  It takes you into Sutton Courtenay, and from there it was only a mile or so to the lock at Culham. Once I got there I wished I had time to just sit on one of the benches by the river and watch it go by, but time was getting on and although I had lights, I did want to get back home before it got properly dark.

But I did have time to laugh at this, in the garden of what I assume is the lock keeper's house. I wish the photo was better, but I think you'll get the gist when you hear my confession about other people's washing lines - 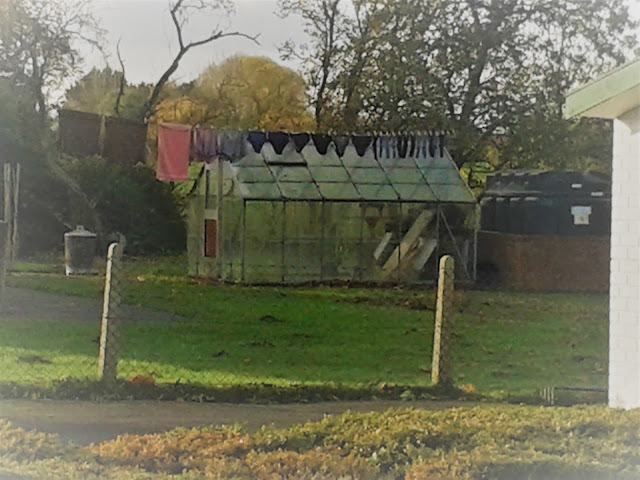 I am slightly obsessed with how people hang their washing out. I do it very tidily and logically (I like to think!) and I am always looking at how other people do it. I mean, look at the way those pants and socks are hung up so neatly! Personally I always hang pants up sideways as I think the billow factor is increased by doing that, but maybe this washing hanger-upper (the lock-keeper perhaps?) likes the more symetrical look of hanging them up this way. Regarding the socks - peg up by the toes or the tops? My mum used to peg them up by the tops, on the line between the apple trees in our garden, until one day I put some socks on and felt something wriggling around my toes; it was an earwig, which had dropped into the sock from the trees...... I'm sure I remain psychologically damaged by that experience.  I think she did it by the toes after that. I did, too, for years, but then decided I like the toes to flap around, so I usually hang them up by the tops, and as our line is not between trees, I don't have earwigs dropping in to worry about. Just hundreds of sparrows pooping on my sheets!!!!

For some reason that reminds me of a line from "Under Milk Wood", where one of the characters, not wanting to have a lodger if I remember rightly, screams (imagine Welsh accent here please) -

I also like looking at what people have actually got on their lines, not in a perverted way - !! - but more in a "Ooh I like that!" sort of way. Not long ago I walked along a local canal path, past the back of somebody's garden, and looked at the washing hanging on the line, and admired the Little Person's lovely clothes hanging neatly on it. I have often thought that I'd love to go round the world, on a bike of course, taking photos of nothing but washing on lines, and write a book about it. But I would need something better than Husband's old smartphone.....

I did then pootle off towards Culham itself, but decided it would be wiser to just turn round and go home now, but on stopping to turn round I was stopped in my tracks by this - 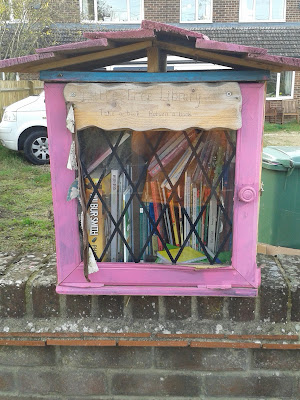 It's a Little Free Library. Apparently they are all over the world - little boxes of books that you can borrow, or I think, take away and replace with another. I had heard of these a long time ago but I had never seen one, and was stopped in my tracks because someone in the US had mentioned one recently in a Coffeeneuring post, which made me feel very connected to a fellow Coffeeneur! I have also seen a telephone box full of books to borrow - what good ideas!


A little more digression, on the subject of tea. When I am at home, the best cup of tea is my breakfast one. I also have one in the afternoon, and possibly one in the evening, but they never taste as good as that first one of the day. One of the best cups of tea I've ever had was after the birth of child number three (Daughter in pics above), having been "off" tea all through the pregnancy. Once she had popped out it seemed as if magically all those hormones that had been saying "Tea is horrible!"" were now shouting "Tea is the best drink on earth!!!". And that's how it always is in the afternoon of a bike ride - I crave TEA TEA TEA. But the only place I might have got one was shut, so I just had to put my head down and keep going for the next 13 miles or so, with only the thought of a cup of tea at home to keep me going.

The extra miles earlier in the day were beginning to tell, and the ride home was a bit of a slog, as much a mental challenge as a physical one. I had intended the ride to be perhaps 30 or so miles but it was 1/2 mile short of 40 in the end. I found myself thinking -

"Three miles or so to the main road, over there, two or three miles to the next village, then a mile to the main road, then up there, turn left, then a nearly two mile slog, then only one more (slight) hill and I'm home......Put your head down and keep pedalling."

And so ends the very enjoyable Coffeeneuring challenge for another year. But there is an "Errandonneuring" one next year I believe.....