Having said that I seem to attract sewing machines that are a bit unusual, this one has nothing unusual about it. However, at the end of this post, you'll be rewarded with a pic of the next unusual one I've just acquired........

This Singer 413 was brought to me by a local lady, via my Facebook page "Needle and Thrift". She was looking for recommendations of someone to service it. I told her the address of the excellent Tom Dilley of Swindon, but also told her what I could do. She brought the machine to me and said she was having a problem with the stitch, which she said was looping underneath and was a bit tight.

Here is the machine when I got it -


1 I'm learning to do one thing first when someone brings me a machine that they are having problems with, and that is to see if the bobbin is in the right way round. In this case, it wasn't, so that wouldn't have helped with the stitch problems.

2 Before I did any work on it, I wanted to know that it would actually start, so I plugged it in and pressed the foot controller, aka the pedal (but you get told off by vintage Singer experts for calling it that). Nothing happened. Logic told me that the first place to investigate was the plug, so I took it apart, and found that one wire was completely unattached from where it should be. I confess that I have never actually rewired a plug; decades ago in the machinery bit of my agricultural college course I was taught how to, but just to make sure I was doing it right I consulted the internet and carefully put the wire back in place. Tried again - bingo! Light on and motor running. So then I removed the machine from the base, removed the top, the face plate, the needle and the needleplate, the bobbin case and the clutch wheel (with help, see below).

4 The clutch wheel at the side had been stuck - quite a common problem I'm finding - and it was Husband who annoyingly loosened it without much difficulty. I say annoyingly because I hate it when I try and loosen something, can't do it, and then he comes along and does it, with a slightly smug expression on his face......!!!! I always think to myself - oh well it's because I've obviously already helped the process along by my constant trying. It's the same when you've got a jar you can't open.......you keep trying, can't do it despite gripping it with a rubber glove, and lo and behold Husband does it just like that. It's also a bit like (sorry about these similes but I need to get this out of my system) when I washed the kitchen floor once and left a mark, which Youngest then-teenage Son noticed a little while later, and promptly removed with ease. I mean, OBVIOUSLY my previous attempts had loosened it but he got the glory!! Huh.......

In the next photo, with that clutch wheel removed, there is old grease on the stop motion clamp washer (that thing with the three sticky out bits), which, unless I'm much mistaken, shouldn't be there. As far as I have learnt, all that is necessary is to put a drop of oil on the shaft that the handwheel sits on, so I removed the washer, pulled the handwheel away from the machine a little, and did just that. Then I put the cleaned washer back on.

NOTE: I always take a photo of this washer before removing it, so that I get it back on in the right position for it to perform its task. I won't go into any more detail about that as there are far better places on the internet to go to find out about it! E.g. here on The Vintage Singer Sewing Machine Blog. Basically this is all to do with stopping the needle going up and down when you are winding the bobbin.

5 I cleaned the outside, including the base, with a slightly damp cloth, some dry brushes, some slightly damp brushes and lots of elbow grease. There was still quite a bit of yellowness on that front plate, so I had a go at that with the damp cloth and a tiny bit of Astonish paste, after which it looked considerably better.

6 I oiled all the oil points.

7 When I put the presser foot back on, I found it wasn't sitting parallel to the feed dogs, which meant that the needle was very nearly hitting the foot when using anything but straight stitch. I looked and looked at the presser bar to see if that was the problem, wondering if it wasn't upright, but I have to admit that here Husband again came in handy as it was him that saw it was slightly twisted. A turn of the screw that holds the presser bar to the machine was all that was necessary to put it right. Thank you Husband........ What's good about doing all these different machines is that I learn something new every time. And also that Husbands come in handy.

Incidentally, in my opinion, anyone learning to sew should first be taught the basics of looking after their machine, and told - "READ YOUR MANUAL!". They could save themselves a lot of money and frustration when things go wrong. All this mechanical stuff doesn't come all that naturally to me, whereas it does to Husband and Sons, but I have learnt a lot just by reading manuals. In fact, I'm a great fan of manuals - whenever we get a new machine of any sort I read the manual first. Eldest Son, however, when he was about 7 and got a digital watch for a present, was diving in straight away, and I think I probably said -

But ignoring his mother, off he goes, pressing this and that and getting it working in no time at all. That's the difference between his brain and mine.

8 When it was all put back together, I tested out the stitches. I just couldn't get certain stitches to work, and thought - "What am I doing wrong?". Frustration........... So I opened up the top again and realized that I wasn't turning one of the dials round far enough to the correct position. It hadn't been obvious until I did this.

The stitching on the far right in the photo below is not so good. After some adjustments I finally got a good stitch - on the left. It wasn't perfect tension, but I think I got it as good as it was possible to get it - perhaps 85% perfect. I had to tighten the bobbin tension quite a lot, but couldn't get it quite tight enough, and I wonder if the reason for this is the fact that the bobbin case is plastic, and you are screwing a metal screw into this, and perhaps the plastic case has worn slightly over the years (I think the machine is over 40 years old) meaning that it's not possible to tighten the screw enough. That's my guess anyway.


And here's the next slightly unusual machine -

It's a Singer 3105, and it's made in Brazil. It has been given to me by the lady who bought the Singer Capri that I blogged about previously. 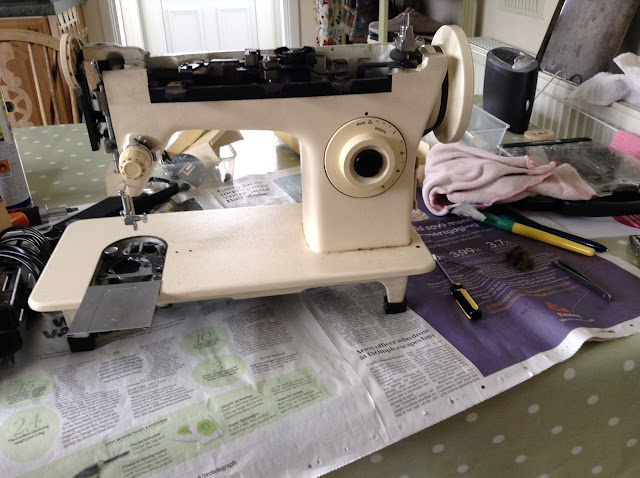 One day we'll be able to eat at this table again. Notice that the cat has still got her eating place..... 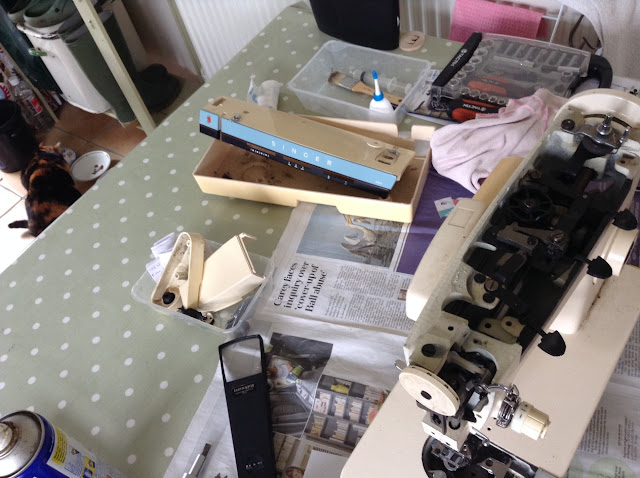