I've had terrible trouble with writing this post, as everything I was writing was jumping all over the page (must be Blogger's fault) or disappearing! I've also had trouble getting the font size to what I want, so forgive me if it alters where you wouldn't expect it to. After having to delete everything (couldn't even copy and paste) here goes for the umpteenth time.....

This is the book I'm talking about - 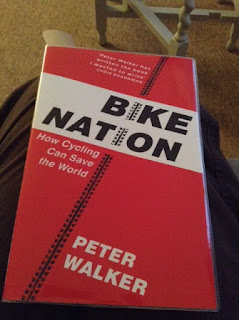 "A revolution on the roads is approaching. Is it time for drivers to Give Way? Guardian news correspondent, Peter Walker, takes us on a journey around the world, exploring the varying attitudes to cycling on our highways.
Visit the shining examples of Amsterdam and Copenhagen, where cycling culture is an intrinsic part of the approach of politicians and officials. How have these cities made provision for cyclists and what are the extraordinary benefits?

And then take to the less welcoming roads of Britain, USA and Australia, where cycling can still be a terrifying experience. What are the tragic mistakes being made when planning and developing cities, and how do these mistakes lead to aggression towards the cycling community?

Millions of us find ourselves frustrated by the motor mentality and fighting for our rights to ride. This brilliant, shocking investigation will prepare you with all you need to know to confidently claim your place on the road."

The book is incredibly informative on the provision made for cyclists in many other countries, and how the attitudes to cycling are so different to here in the UK. Reading it was a real eye opener.

If only people in the UK could be persuaded of those "extraordinary benefits"..... Ever since I was a teenager I have been infuriated by people who drive unnecessarily, and since doing a lot more cycling myself in recent years I have become even more infuriated! The pollution, the noise, the road building...… but I've realized that getting infuriated with people doesn't really help, and that the carrot approach is better than the stick. We need to make cycling in this country a much better experience.

I understand that in certain circumstances and at certain times in our lives, driving may be necessary - it was for me when our children were all young and, due to the awful (and now non-existent) bus service, any longer journeys had to be undertaken by car. But since I have started cycling more, I am constantly asking myself why more people don't cycle, when it has so many benefits.

There are probably lots of reasons, but one of them is undoubtedly being scared of riding on the UK roads due to the traffic. Another is probably just being scared of cycling, full stop, because even though most people learn to ride as a child, most of those same people give up cycling as soon as they learn to drive (or sooner....), and getting back on a bike takes some getting used to again. It took me some getting used to when I started cycling more back in 2012. Previously I had only cycled short distances on our fairly quiet, local country roads (although overtaking in the wrong places and too fast is often worse on these roads than elsewhere) but now I was cycling the 5 miles into and around our local town of Wantage, and that took some getting used to. I also started cycling much further afield and found I was loving it!

Although I have not (yet?!) cycled abroad in cycle-friendly places like Holland and Germany, in those countries it is just accepted that many journeys will be made by bike and cyclists are seen as normal rather than slightly freaky and geeky as we are here! Go on, admit it, if you're reading this and you're not a cyclist I bet you think we're a slightly freaky and geeky lot!!

"Hi Lizzie, I agree totally with what you’re saying, both about a self-limiting attitude to travel and consumerism. At one point though you’re on your own and that’s cycling in Britain! I’m not sure I’ve ever seen a dedicated cycle path in the UK and with the mostly narrow and twisty roads available, it seems extremely hazardous to venture out on a bike. I see people cycling and can only imagine they have a death wish! Which is a huge shame, as cycling, and especially electric bikes, are a great alternative to fossil fuelled cars. I cycle all year round here, from -25C to +30C, in snow and rain, but mostly I can cycle anywhere I want to go on cycle paths, with no hassle from cars!"

"I’m not sure I’ve ever seen a dedicated cycle path in the UK " Well, I can assure you, they do exist!! In fact, I cycled on some in the summer in the very area where he was, in Somerset!

Cyclists here have a death wish? Quite the opposite!!!

The book shows how one of the benefits of improving conditions for cyclists is that it improves them for drivers too - if more people cycle, there are fewer cars on the road, which makes it better for the drivers! It's a win-win situation!
I always hope that just being seen out on my bike might encourage others to do the same, but after reading the book, I realized that I wanted to be a bit more pro-active in encouraging others to cycle/cycle more, and in getting involved generally with improving conditions for cyclists. I thought that my local Cycling UK group might be a good place to start. Cycling UK (the old Cyclists' Touring Club) does a huge amount of good work in promoting and encouraging cycling, and last year I had decided to support them by becoming a member, but hadn't been out on any rides with my local group. I don't generally cycle with other people. If I'm not using the bike for purely utilitarian reasons, such as shopping, but am going for a nice trip out, then I love being able to just go off where I want, at my own speed, and stop when I want or need to, for whatever reason. If you cycle with a group of people it's a whole different ball game! You can't just stop to eat, or drink (I'm not one to grab my bottle from the bike and drink as I go) or for a call of nature whenever the need arises.....

However, back in the summer, I joined my local group for one of their rides. They have different categories of rides, from 1* to 4*, depending on how far and fast you want to go, or whether you want to go off road. This year also happened to be their 25th anniversary so they were having all four categories of rides on the same day, with everyone meeting up in a village hall for tea and cakes. On that day I joined the 1* ride, which was at a nice pace of 8-10 mph, and about 21 miles, with another 12 added on for me, to get to and from the start point. It was a lovely sociable ride. I also did a 2* ride at a later date, but while this was also very enjoyable, I preferred the more relaxed pace of the 1*.

However, most of the people riding were already regular cyclists. For those who aren't, and need encouragement, there are lots of schemes around the country, e.g. Bikeability, to help people of all ages get into it -  they are rather like the old cycling proficiency scheme that was run for years in schools, but vastly improved.

I have only come across these organisations since I have been cycling more myself (except Cycling UK, which, interestingly, I had always been aware of in its earlier form as the CTC) but I think that the general public will become more aware of them as they make themselves felt. Here's one which has recently come to my notice, not so far from me in Witney -  the Windrush Bike Project; they do cycle training, cycle maintenance, campaigning and also sell refurbished bikes. I hope to cycle over there one day to pay them a visit, and would love to see something similar set up more locally.

I did feel very encouraged when, sitting on Didcot railway station earlier this month (have you noticed how these days "railway" stations have somehow become "train" stations? I wonder why......) awaiting the first of my four trains to Scotland to visit our daughter, I got chatting to a lady, probably in her forties, who sat down beside me on the bench, having just parked her (very ordinary) bike nearby. I said I'd like to try putting my bike on the train again one day, but that I'd read negative stories about it that put me off. It turned out that this lady was starting a new job in Oxford that day, and had bought the bike only a couple of weeks ago  and was taking it on the train for the first time. I thought that was brave - two big new things on one day! She had had a shortish ride to the station and would have another one at the Oxford end to her new job, and had sensibly enquired beforehand about taking it on this particular train. It would work out cheaper than driving to Oxford. She had already discovered that cycling into Didcot to do some shopping was surprisingly quick and easy compared to using her car. I was impressed, even more so because this lady didn't look at all like your typical cycle commuter, but she was going for it! Good for her!

And here's a video on how France is intending to triple the number of cyclists. Now that would be quite something!

If you are a cyclist, have you read this book? Do you cycle, like me, only in this country, or have you cycled in countries where cycling is seen as more normal than it is here?