A bit of foraging and preserving, and Coffeeneuring 2018.

If you are wondering what "coffeeneuring" is, then have a look at this blog, Chasing Mailboxes, where you will find a full explanation. Here's a brief summary from the blog -

"The Chasing Mailboxes Coffeeneuring Challenge is a relaxed cycling endeavor for people everywhere, and it’s coming your way once again, starting October 12, 2018. If you like riding a bike and enjoy drinking coffee or tea (or even hot chocolate or cider), consider this fall challenge."


The challenge started in the US (the spelling gives it away...) but has spread to many parts of the world. Participants can join the Facebook group and post details of their exploits, or blog about them, or just record them on Strava perhaps (there has to be some proof that you've actually done what you say) and what is rather nice is that the number of people participating still seems small enough to almost get to know these people and their cycling and drinking habits. Interesting bits of discussion crop up on the Facebook group; never mind the order of scone/jam/cream discussion - does the cheese in beans on toast go on top of the beans or underneath?!?

It's a very easy and pleasurable challenge - not like some cycling challenges, where hundreds of miles and probably lots of hills are involved. Having said that it can be a bit too easy to just cycle somewhere, have a cup of coffee/tea, 7 times in 7 weeks, so I like to add in a challenge within the challenge, as do some other Coffeeneurs. However I only came up with one the night before the challenge started, but, "Orf we jolly well go!" as I'm sure someone said, somewhere, once. Maybe it was my bicycling hero, Mrs Armitage, as it sounds like exactly the sort of thing she would have said. So, this is my challenge within the challenge -

Every Coffeeneuring trip has to be combined with a bit of foraging, and preferably for something different each time.

Actually, I am using the term "foraging" rather loosely, and am including getting anything for free if it has been "foraged" is some way, like out of a skip, but I'm not including getting it for free via Freegle, as I would definitely deem that cheating. There are plenty of apples to be had locally,  but I have not picked anything else before at this time of year, so again that means the challenge will be more difficult. I have been looking up things that are available now, like chestnuts. All the hazelnuts have been taken by the squirrels. Sloes, haws and rowan berries are possibilities, none of which I have used before. [Update: On a walk yesterday I found some blackthorn bushes which were very heavily laden with sloes, so I am about to make sloe gin. Never had gin in my life.....]

And on that note of foraging, I have only made a few preserves since we moved to this house, and I have asked myself why this is, when in the old house I had made lots of jams, chutneys and syrups.  I realized that it's because I don't really like working in our present kitchen as much as I did in the old one, which was lighter and a squarer shape. Husband doesn't quite get this sort of thing and when I talk about what I would do to the kitchen if it was ours (it isn't!) his eyes glaze over. However, I resolved to ignore my feelings and make the effort, and have made elderberry and rosehip syrups. I had two foraging trips to pick elderberries, and one to pick rose hips, though I was very disappointed to find that just before I was going to pick rosehips the very bush that I had had my eye on for weeks was removed when I found that said bush had been ripped out in order to put a new fence in! Gutted! However, I managed to find enough from our own garden, and some from the side of a local track. There are still plenty to be had elsewhere.

I made a new jelly bag, from calico, as the one I had was rather small and not very well made, and I've always thought the stitching might not hold much longer and I would end up with an incredible mess to clear up and all my hard work gone to waste. I also had to find a new way to hang up the bag, as when we moved here two years ago I stupidly sold the stool I had used before, completely forgetting that I had used it as a jelly bag stand.

The thing that takes time with the elderberries is removing them from the stalks, with a fork, but I just turn the radio on, set my mind to it and think of the lovely syrup that's going to result.  With the rosehips it's the mincing that takes time. I don't have many electric gadgets in the kitchen as I like doing things manually, but I must admit that using my 1950s mincer (Ebay purchase) is very slow. Next time I shall try using our nut chopper. However, I got there in the end! 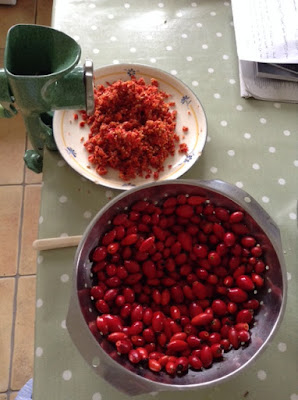 And here's the new hanging method, with the new bag - 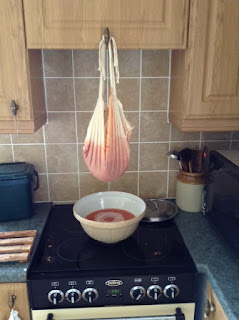 After boiling the resulting juice with sugar, comes the bottling - 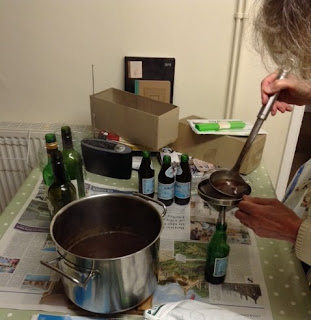 I'm still trying to find a source of more some small bottles. One pub has agreed to save some for me. There's a new cafe in town where I shall go and ask next time I'm shopping. Actually I think that might well come under "foraging"!!

I now have several bottles of both elderberry syrup - plenty to last us the winter I hope - and a few of the rose hip. Elderberry is absolutely delicious poured over puddings, particularly anything lemony or chocolatey. You can of course drink it as a cordial, and it also has medicinal benefits. The rosehip can also be used in the same ways, but Husband and I like to drink it neat, which sounds rather indulgent somehow! The first time I tasted it I wondered why the smell in particular seemed so familiar, and then my mind wandered back a very long way to the 1960s, when my mum used to give me a spoonful of it in the form of Delrosa. I had completely forgotten - it's fascinating how memories are stirred by smell.

I have read conflicting opinions about the effect of the boiling on the vitamin C. Apparently in the war they were very careful to use a method which hopefully wouldn't destroy too much of it, but here's an interesting extract from "Food for Free" by Richard Mabey -

I forgot to add that I added brandy to some of the elderberry syrup. I think I added about a tablespoon to a wine size (750ml) bottle, but that's bit vague so it might be best to find a more authoritative source for the quantity to use! You can see my recipe and more detail in this post.

Here is my much annotated recipe for rosehip syrup - 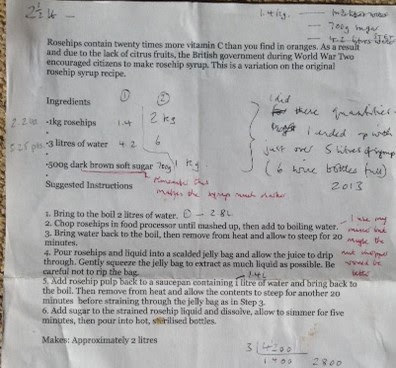 Other preserves I have made this year have been -

Rhubarb and Orange Marmalade (back in the spring)
Sweet Pickled Damsons (September - another extremely yummy one!)
Apple and Onion Chutney (this week)

Hopefully my next blog post will contain details of the fruits of my Coffeeneuring labours!