Never throw away your old socks.....

Ever since merino wool underwear came on the scene several years ago, I have been a fan. I'm sure that wool underwear is actually nothing new, but I always thought that wool next to the skin must be very itchy until I tried merino and discovered that it was amazingly comfortable.

I have four merino tops now, one which I bought from Vulpine (before they went bust), one is from Finisterre, one is some unknown Chinese make that Elder son gave me, and one is a heavier weight Smartwool one (also given to me by Elder Son). The problem with the Chinese one and the Finisterre one though is the length of the sleeves - they are not long enough for me. It is only in recent years that I have realized I have long arms, and it drives me nuts when a supposedly long sleeve creeps half way up my forearm underneath the other garments that I wear on top.

So, necessity is the mother of invention, and I thought - how can I lengthen these sleeves? Answer - with old socks. These particular socks are not actually that old, but annoyingly, considering they were not cheap (bamboo ones from Bam Clothing) they have worn out at the heels and would have taken ages to mend (I think a Singer stocking darner, an attachment for a sewing machine that enables you to quickly darn thinner socks, would have come in handy!). I'd hung onto them knowing they'd come in useful for something. 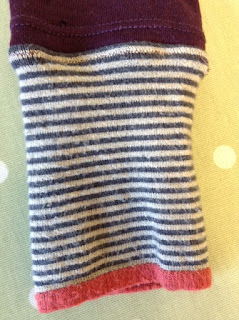 It does the job perfectly! No more sleeves riding up my arms. I have done it on both the tops where the sleeves were too short. On the other top I used the main body of the sock, hemming one end.

This particular top (it's the Chinese one) was also too short in the body, and would barely stay tucked in. A long back, or just long all round (the Smartwool one is lovely and long) is particularly important when cycling. For this I used the ends of some leggings which I had already chopped off below the knee in order to be able to get them on more easily under my cycling tights, which are not warm enough in the winter without a second layer underneath. 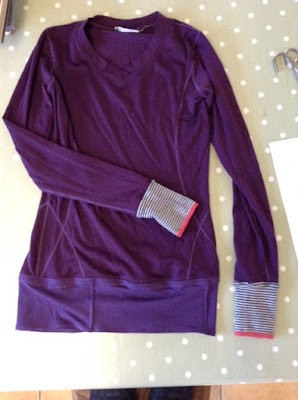 In order to have the knitted grain direction matching that of the top, I had to cut across each leg and re-stitch them together, to make a long strip to go round the top. It's not the neatest of needlework but it does the job and it's not going to be seen anyway!

It's very satisfying doing this kind of job - making something much more wearable.