It was a case of not so much "what this bike needs....." as "what this cyclist needs....." and what this cyclist needed was a wool, full zip close fitting jumper, to be worn over a baselayer and midlayer. Obviously there are hundreds to choose from on the web (and even in real shops!) but they are not cheap. So, while putting away clothes in a drawer recently, I realized I had one too many charity shop men's jumpers. (As an aside, you can always get PLAIN AND SENSIBLE men's wool jumpers in charity shops, but rarely do I see PLAIN AND SENSIBLE women's ones. It's not that I wear "plain and sensible" all the time - it's just that anything that isn't plain and sensible will always have something against it for everyday wear, like baggy sleeves that get in the way of rubber gloves......)

The one-too-many was a colour that doesn't suit me - maroon, so I thought "Hmmmmm, I wonder if I could chop this up the front and put in a zip and take in the sides so it fits more closely and which will then be my ideal go-to winter garment for bike rides?" Might as well have a go.

This is what I did: 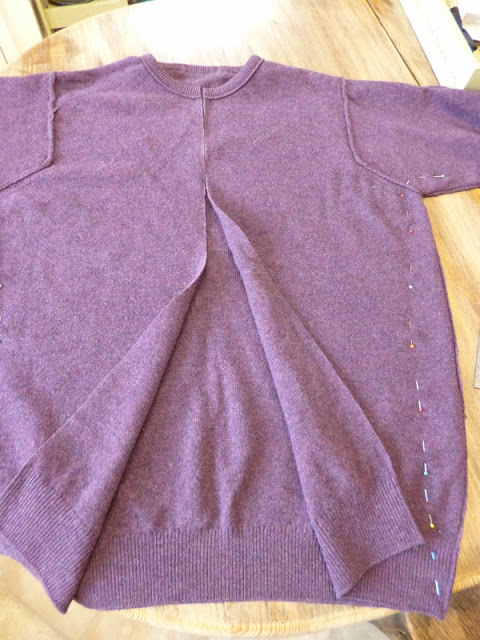 I cut the jumper down the middle. Then I pinned and tacked the sides, and also the sleeves both under the sleeve and on the top, so as to make the whole thing closer fitting. I stitched these seams on the sewing machine - I did think about doing them by hand as if I were sewing up a jumper I had knitted, but I thought I might as well just try doing them on the machine. Seems to have worked OK! 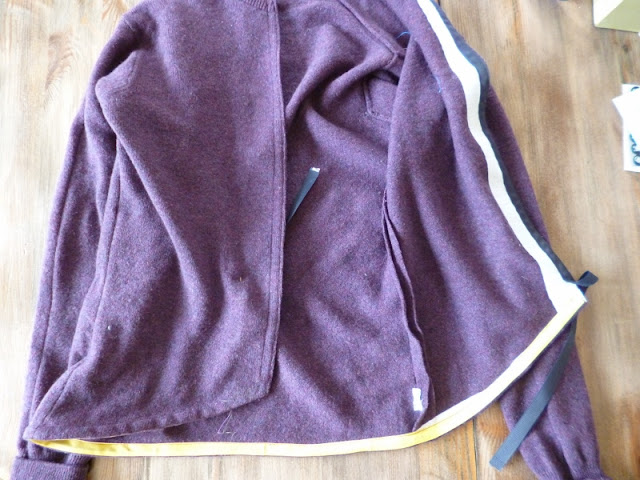 I sewed a narrow hem down each side of the front. I knew that I needed to sew something down the fronts to stabilise them before attaching the zip, so I started to attach some grosgrain ribbon (which is what you see on woollen cardigan front bands). However the fabric started to wave, so I decided to stabilise it even more before adding the tape. To do so I used a strip (about 3/4" wide) of iron-on woven cotton interfacing. I love this stuff - I use it much more than the non-woven stuff and even save the tiniest scraps of it, as it has all sorts of uses.

You can see from the pic that I have also cut the jumper so that it is longer at the back, and curves up at the front. I used the interfacing all round the bottom too, and then hemmed it with bias binding. I was being adventurous, so used yellow.......

Then I sewed the ribbon onto the fronts, and it worked well this time - no waving. 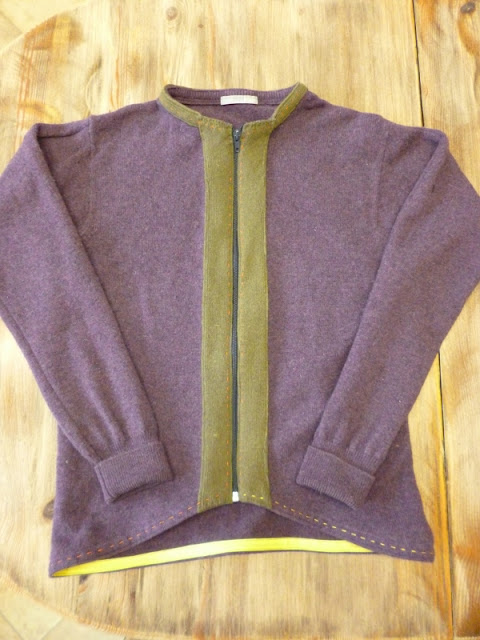 I sewed on the zip, tacking it first as I have found in the past that if you've not very careful when sewing on open ended zips then you end up with the two sides not matching up. Even this time they didn't match up 100% but I have managed to disguise the fact!

Then I thought "Perhaps I can somehow detract from the maroon-that-doesn't-suit-me", so I dug out an old green cardigan which I had accidentally shrunk ages ago (and which DID suit me) chopped off the front bands and stitched them to the front and round the neck. Plus I did some coloured stitching along the bottom, up the front and round the neck. I'll confess that I also cut out from this same green cardigan the letters LIZZIE and sewed LIZ on one side and ZIE on the other, across the front, but decided that that was a step too far and unpicked them. It made it look like a baseball jacket. 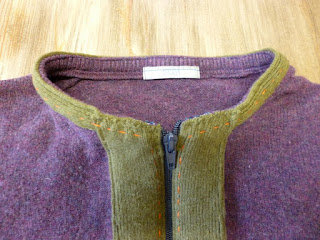 I think you'd be hard pushed to see that the tops of the zip don't quite match up.... 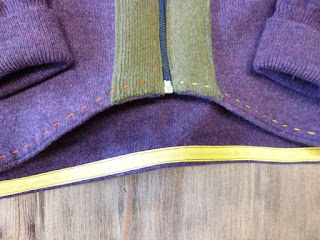 I tried it out yesterday on a 20 mile bike ride with Husband. The weather was coolish - one of those days when you're not quite sure what to wear. I had on a long sleeved merino wool baselayer (I wear these all the time in the autumn and winter - what did I ever do without them? wore even more layers - that's what! You might guess that I am a fairly chilly person....) plus a cotton long sleeved top and then my new zip up. On top of that I had on a very lightweight windproof/waterproof jacket and a home made "buff" (made from a child's t-shirt). I was just the right temperature - and inwardly gloated over husband who was a bit chilly in what he was wearing.....

I have got another similar jumper, but in a colour that suits me reasonably well, that I might give the same treatment to, as this attempt was successful. And I shall be keeping my eyes open in the charity shops for more....... We've got a new one in town where all the rails of clothing are either £3 for the good stuff and £1 for the average stuff!!!

Haven't forgotten about the Aldi clothing review. I'm drafting it.