Making sleeved bibs, eating pizza left on the train and cleaning the bike.

Another bits and pieces post, but hopefully with some useful and interesting stuff. I say that because I spoke to someone recently who thought that bloggers wrote in order to brag about what they did (I don't think she actually read blogs - just got this idea from somewhere). It was always my intention in writing a blog in order to share things with other people that might be useful, because I had learnt so much that way myself.

It always takes me ages to write a post and so I am going to try my best to write this one a bit quicker! (Slow internet doesn't help.) I should add that I will be going back and forth between my sewing room and this sitting room and making shopping bags while photos are uploading. So for the record it is now 10.43 (GMT) on Saturday 19th March. Hopefully I will get it finished before we change to BST - next weekend!


So, on to a current and ongoing project. Bibs.

I was asked my a customer if I could make some towelling, sleeved bibs for her grandchild, and she brought one to show me. From this I made a pattern, although it was a bit tricky as I couldn't cut it up - I just had to draw round it and hope it was roughly right. I then made one up using old towelling, and bound the edges with strips of old t-shirt. I gave it to my customer to see if it fitted the grandchild. It was too big round the neck, but I was a bit flummoxed as to where to take the excess from, so I decided to download this bib pattern and make that. I made it out of old flannelette sheets, using a double layer for the front, and bias binding for the edges, and a Kam Snap (brilliant things, have used them a lot, see here) for the fastening at the back. This was the result - 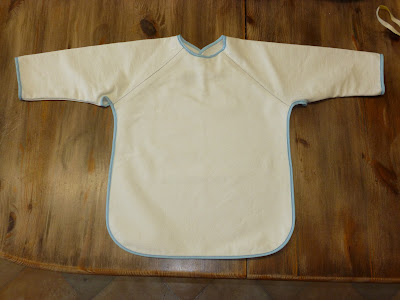 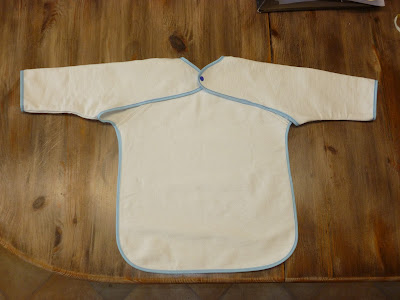 Well this was good. It was too big but making it had given me a better idea of how to alter the pattern I had made, which I duly did. Again I made it up in old sheet, and used some bits of cotton ribbing from an already-chopped-up long sleeved t-shirt to make cuffs. This is it -


This one's quite good and I have now given it to my customer to see if it fits. If it does I will then make however many she wants using towelling for the front, and something else for the sleeves.


Now, on to a recent trip. I fancied a day out - they don't happen very often and I needed a change! So I thought, well, London? I had a few places in mind to visit, which were -

Goldhawk Road, for the fabric shops, but when I googled it for up to date information I saw that   there was building stuff going on and that some of the shops had gone.

V and A Museum

In-ku shop - where designer Carin Mansfield sells the clothes that she makes (to last!). I came across her recently via the Facebook Make do and Mend group I'm in, and thought "Ooh this is my sort of thing!"

which would all have been within walking distance of Paddington station, so it would only have cost me the train fare - £25 - from Didcot which I would have got to with Husband early in the morning as he works there. But the trouble is that once there I would have wanted to spend some money (though definitely would not have in In-ku!) and the train fare wouldn't have left much to spend.....

So I thought - Trowbridge? How did I get from London to Trowbridge in my head you ask? Well, I knew there was a good fabric shop there, plus there are the limitations of where one can get to from here, and I could get there by bus and train. Plus I don't think I've ever been to Trowbridge so why not? And the town's wool and weaving history looked interesting. Husband was off paragliding so I couldn't have the car and I don't much like driving long distances anyway - I much prefer buses and trains (from an environmental point of view and from many other points of view e.g. it's more interesting!). So he took me early in the morning to get the bus (4 miles away) to Swindon station to get the one-carriage train to Trowbridge. Return fare £10.20, at 8.49 am - could have got it for £7.20 if I'd got a later train. I was amazed that for pretty much the whole journey of 35 miles or so the land on the east side of the line was flooded to some extent. (I know it was 35 miles because I had my Garmin on on the return journey! I watched the train speed up to just over 70 mph.)

This was the shop - Fabric Magic. And very good it was too, with a big selection of fabrics (dressmaking and furnishing), haberdashery, and yarns. I didn't buy anything there but asked if there was another fabric shop in the town and the very nice assistant told me that there was a stall in the indoor market, which I duly found. And very good that was too!!! It was called Ann's Trimmings and you can find it in the Castle Place Market. And yes I bought something. I don't often buy new fabric except for specific projects (usually clothing) but I treated myself to this lovely furnishing fabric - £6.99/metre. I did find a bit of a flaw when I ironed it (after washing, to pre-shrink, which it hardly did at all) which was a faint blue line, but I can easily avoid it. For that price I wasn't going to complain (and wasn't going to make a return journey to Trowbridge to do so either!).The tape was also a great find - it is cotton/hemp and was about 85p/metre. I might use it for making some labels. 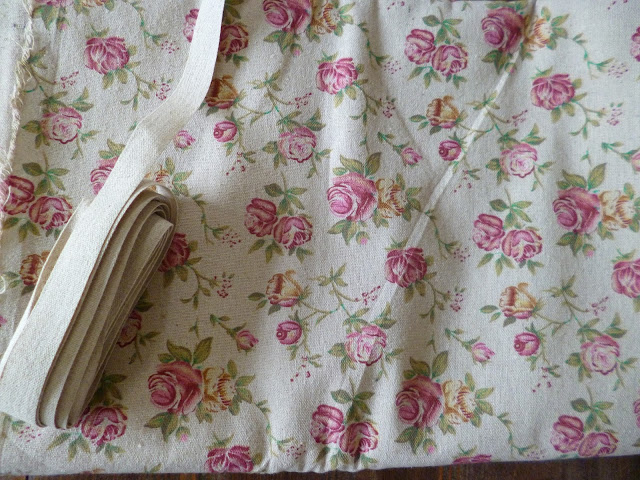 I had a look round the town and was rather disappointed to find that it was so typical of so many towns in that despite having some lovely old buildings and being quite large it only seemed to have the same old shops that you find anywhere. Hardly any independents. And there was the usual newly built shopping mall which had the usual big cheap chain stores in it. Nearer the station there were a few more newly built shops - Argos, Next and something else. How dull..... There was however a good museum, which had displays about the town's wool and weaving history that I mentioned earlier, and the kind assistant gave me a run down on the local coffee shops.


Now, on the way home, the two girls opposite me left this on the table!!! 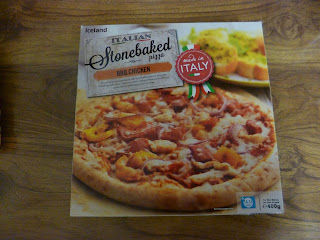 It didn't take me long to decide that it would be a waste just to leave it there......either someone else would take it or a member of staff would take it and throw it away. The girls certainly wouldn't be back for it any time soon, or ring up Lost Property and say "Have you found a pizza?" Nevertheless when I put it in my shopping bag I did do so in a slightly surreptitious manner.....

We have a thing called a Remoska (a sort of mini oven that uses very little electricity) so when I got home I cooked it in there and had it for my tea. It was yummy! When I told my daughter that I had found a pizza on the train and eaten it she was a bit worried that it was a half eaten one that someone had left behind. I don't know why my children think these weird things about me.......

This is something else I've been doing, which I tend to put off as I don't exactly enjoy doing it but it's a job that must be done now and then - cleaning my bike. It's great to get and do more cycling again now that the days are getting longer. It's the short days rather than the cold weather that stops me cycling so much in the winter. 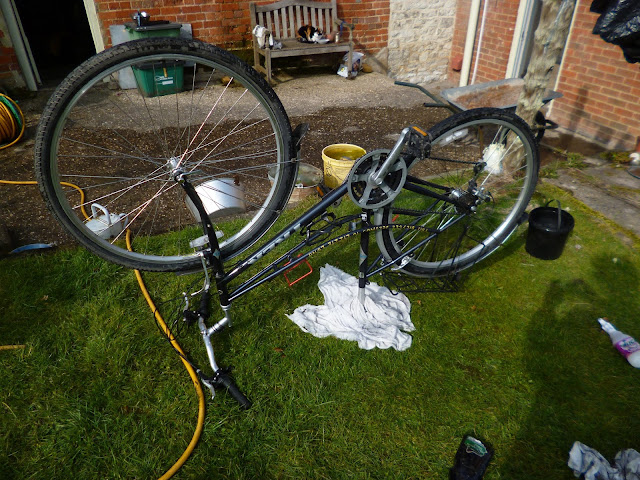 Spotless rear cassette and chain before oiling. And the book I got to try to help me do bike stuff myself without having to ask the male experts in the family...... 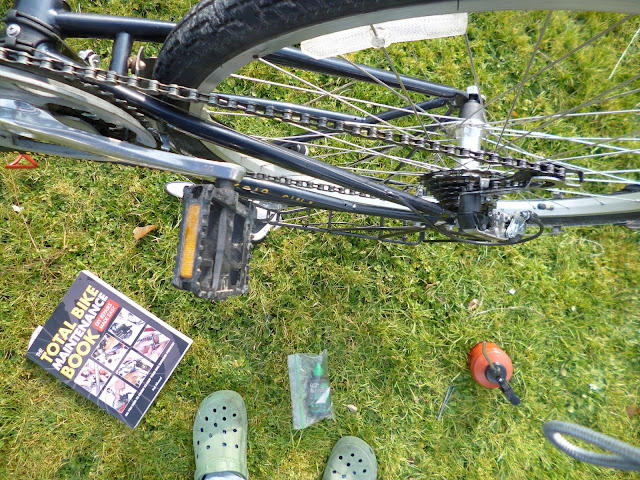 Well, it is now Wednesday and the time is 11.15 GMT, so that's taken me about 4 days! But, in my defence, I have written another post (this one) and published it between then and now.