Altering my Not Your Daughter's Jeans, and cycling in them

I am actually in the middle of another longer post but there I was cycling in my new jeans today, and I thought - oh I'll do a quick post about them when I get home. Actually when I got home the computer said "no!!!!!" but now it's saying "yes OK then" so I'll get on with it.

I've been needing some new jeans for ages. My patched ones, below 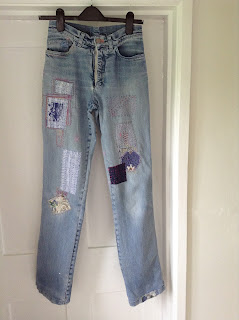 really are on their last legs. The bits that aren't patched are extremely thin and although I might patch them some more I did feel the need of a new pair, being slightly scared that the current ones might just develop a split or hole at an embarrassing moment. They cost about £11 in a House of Fraser outlet store several (6?) years ago. They are James Lakeland, which cost a fortune at full price, but they do fit me nicely.

I have had two pairs of this make and price, and it would have been quite reasonable cost wise to have gone back to the shop to see if I could find some more. But I have become such a bargain hunter in recent years that I couldn't bring myself to pay that much, when I know that I can get some in a charity shop for anything from £1 to perhaps £5 - if I'm patient and wait to find the right ones.

So I have been patiently looking for a while. However last week I had the chance to go to a charity shop I can't get to so often, so I whizzed round it, giving everything a quick once over before I got to the sale rail. Don't you just love sail rails in charity shops!! I spotted a pair of jeans which said size 8 inside. I'm a size 10 but I could see these were bigger than an 8, AND - they were Not Your Daughter's Jeans (£150 new I found out later!!!) so, being in a bit of  a hurry, I thought "I'll 'ave them!" (like Burglar Bill, who you will have to google if you haven't read the children's picture story book of the same title) and didn't bother trying them on, because I knew I could probably flog 'em on Ebay if they didn't fit.

Anyway, when I got them home and tried them on they were a reasonable fit, a bit big round the waist but for £1 I wasn't complaining. I discovered that the 8 was American size 8, which is UK 12. I should add that they were like new.

I wore them once last week but did think I'd prefer them if they fitted a bit better round the waist, which was really the only place where they didn't give the fit I wanted. I have taken in jeans before for a customer quite successfully - even though I'd had to google how to do it at the time. But don't you bother doing that, just take my advice and go straight here to a Burda Style page.

This morning I got to work. Apologies for not including a photo of the front before I set to work -  I dived in on unpicking the side seams and forgot. However, here is a photo of the jeans with the side seams unpicked,  moved inwards and tacked in place, and two belt loops removed (don't need those anyway) - 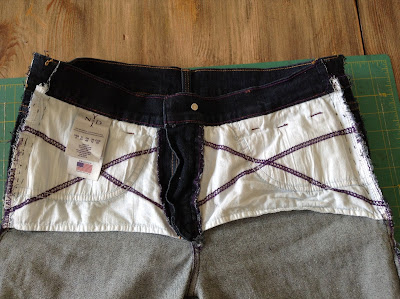 I tried them on and as they weren't quite spot on I drew a line (the red one) to make the stitching line graduate a bit better into the original side seam. 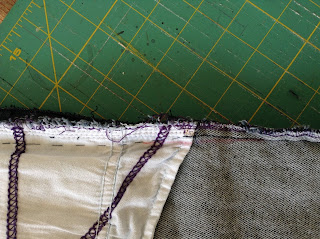 And here are the finished jeans. The side seams look as if they are a bit too near the front, but in fact they look fine when on and I'm really pleased with how they've turned out. I lost a little bit of the pocket opening but not enough to matter. I can still get my hanky in. You can adjust where you stitch so that this doesn't happen if necessary. 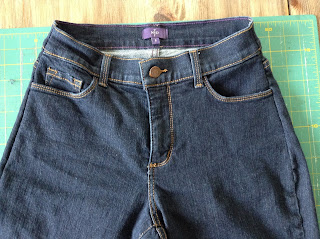 A note on the fabric. I have had jeans both of 100% cotton, and of cotton with Lycra. I'd always assumed that the more Lycra there was the more stretchy the fabric was. But this doesn't seem to be the case. My old jeans have got a lot more Lycra in (can't tell you how much as the label is completely faded!) while these new ones only have 1%, and yet they are much more stretchy. I once bought some from Marks and Spencer which I took back because I didn't like the stretchiness of them, so although these feel REALLY stretchy they are great - probably the most comfortable jeans I've ever had.

Now on to the cycling bit. I had an errand to do in town (collecting kefir grains to restart my kefir cultivating - another blog post one day!)  which is just over 5 miles away, and as the weather was lovely and sunny off I went. Over the winter I don't cycle so much but when I have done "I have been mostly wearing" (a line from the Fast Show, in case you don't know, where the scruffy bloke comes out of his shed and says "This week I have been mostly wearing - a thong" or some such article of clothing) my Craghopper trousers, which are fairly comfortable for cycling in, but sometimes I'd rather be able to wear jeans. I have worn my old ones and they were OK, but not quite so good for legs that are pumping up and down, but these new ones, well, they are sooooooooooooo comfortable on the bike! I think I will be living in them from now on. I do like having legwear that I can wear for sewing (most important to have the correct legwear......)  then out for a walk or on the bike, without having to go and change.  There's a bit of a thing in the cycling world about whether you can cycle comfortably in jeans and some companies make really expensive ones specifically for cycling but honestly, these jeans fit the bill perfectly! I think the back is slightly higher than with a lot of jeans which is good for cyclists. But I wouldn't pay £150 for them!

And now my jeans-clad legs are getting cold in the draught that comes through the door near where our computer is, so I'm off back to the warm and sunny kitchen! I've got a bit into bread making again lately so I might just make some......