If you've got here before Part 1, then you'll need to go back to it, or this Part won't make sense!

I got the jacket finished, and was much happier with the results. Just to recap, this was what I did after realizing that I wasn't happy....

Removed the buttons
Unpicked the bottom of the sleeve lining
Trimmed off about 3/8" of the hem of the sleeve, trimmed away some of the interfacing,
and cut notches into the hem - all to make the fabric give a bit more

Then I re-did everything. I didn't need to completely re-do the mitred corner, I just undid the top of it to allow for the trimming. I sewed the buttons on more loosely this time.

Here is the original sleeve before unpicking -


And this was after the first attempt. As I said in Part 1 I wasn't happy with the way the underneath is "pulling". (Should have taken a picture of it flat on the table as in the above one to make a proper comparison.)

And here is a proper comparison! This was after my second attempt. I'm happy with this.

As you can see the buttons overlap each other slightly, but they did in the original. The buttonholes are so close together that it was impossible to get them on without them overlapping.

And that lining that I had originally sewed in incorrectly?

It's hard to explain this properly, but basically the lining should have some extra length in it (about 1/2") to give some ease. When you sew the bottom of it in place it will actually pull down over the stitching giving that ease. If you look at sleeve linings in suits you will see that this is how they are done. Ease can also be incorporated into the lining of the back of the jacket by using a centre pleat. I am learning all this as I go along!!


Re-doing things was a pain but I would always rather do that than not be happy with the job I've done.

I have now given it back to Son-in-law who says it is perfect!

The story here is that I had bought two £1 wool jumpers from a charity shop. I wanted to use them either in a patchwork blanket that I am making out of squares cut from another wool jumper, or to make a child's coat/jacket. Which idea I chose would depend on what they came out like after washing i.e. how much they shrank and felted. I washed them on a 40 degree minimum wash cycle (that's the one with 40 and one line under it). They shrank and felted just a nice amount. I laid out one of them on the table and thought I could chop down the middle, put in a zip, and perhaps cut off the ribbing at the bottom and bind the edge with something colourful, and Bob would be your uncle - one warm wool jacket for a child of about toddler size.

However, I decided in the end to cut out a proper coat, using this very old pattern which I got free (I think) from Family Circle magazine years ago when it was available here in the UK. I see it was closed down in 2006, according to Wikipedia. 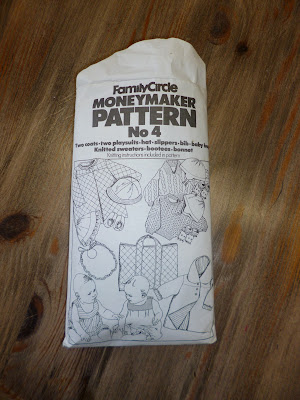 I cut out the 12 month size, needing the pieces from both jumpers (I have quite a bit left over to make something else). I used a shirt - again £1 from a charity shop - for the lining. I would have preferred to use something more slippery, and looked at all the winter coats in the charity shops (vastly reduced at this time of year) to see if any of them would have lining of a suitable colour. None did unfortunately, and as this was supposed to be a make-it-for-as-little-as-possible project, I didn't want to buy new lining. So I bought 4 shirts, and chose the one made of the smoothest cotton. (The others will be for some other project.)

Earlier in Part 1 here I mentioned that there were similarities between the two jobs - shortening the suit jacket sleeves and this baby's coat. The similarity was in the linings, and the subject of "ease". When I had made the lining of the coat, and joined it to the outer, I found that the sleeve linings were
much too tight. At this point I felt like giving up and abandoning the project, partly because I had already discovered that when I cut out the yokes (outer and lining), I had cut them to the 6 month size and not the 12 month size! This should have had an effect on the size of the armholes of the body of the coat, but I hadn't noticed because you have to ease in sleeves anyway, and the fabric had stretched quite readily. But I had had to re-cut the lining yokes, guessing where the 12 month size lines would have been. So I was already a bit cheesed off! I should have removed the whole lining and re-cut the sleeves, with ease incorporated, to make them fit better. But to be honest I didn't know if I could do that successfully. [Apologies that that paragraph has centred itself].


I really didn't want to give up as I did think this could be a nice coat if only I could find some way to sort out the problem.So what I did was to unpick the sleeve linings almost right up to the sleeve seam, and then insert a piece to give that ease.

In the picture below you can see just how much the lining pulls apart and therefore how much more fabric is required to fill in the gap.

In the picture below I have pinned in the extra piece, and also added some to the bottom (by machine) to give extra length - just like the suit jacket sleeves had.

I handstitched the inserted piece. 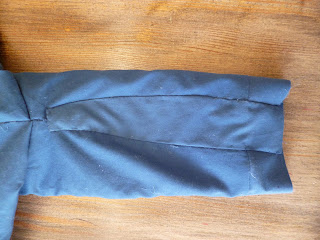 After turning the coat right sides out, I bound the neck and sleeve edges with bias (cut from the shirt), and then topstitched by hand all round the edges. I've just realized that this picture has different buttons on to the finished one later in this post! In fact at this stage I was just laying buttons (from the hundreds I have!) on top of the coat to see which ones I liked best. In the end I chose the blue ones in the last picture. 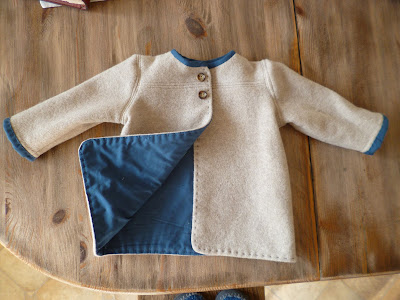 Underneath them I sewed two large poppers.

I would like to sew two more poppers, to hold the coat closed further down, but don't really want to add more buttons (and haven't got any more the same anyway!) as it might spoil the look of the coat. However, adding poppers without the stitching showing through is impossible unless I only stitch them to the lining, which wouldn't be ideal as it wouldn't really hold the coat properly in place. More thinking required! 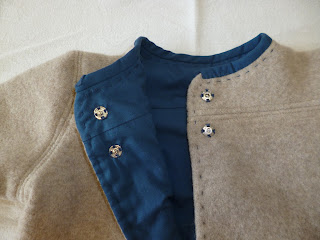 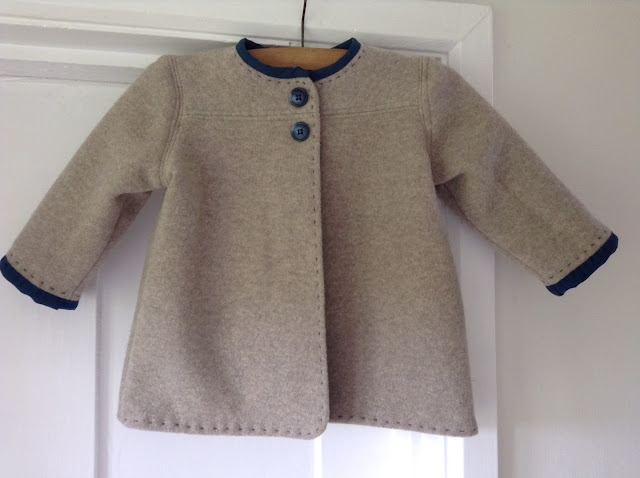 I have shown it to my daughter, the one who had the gorgeous Lily on Christmas Eve, and she loved it! I thought she might not want it for Lily because of the blue in it, but she does, so if it fits when Lily is bigger then Lily's it is! I hope it does fit; I'm not sure about under the arms. I think if I make any more babies' coats then I'll use another pattern that I've got that's got more room there.

My next sewing project is for a regular customer - making a cover for an outdoor bench cushion.

I am now going to keep news of this updated on my "Cycling and walking" page. Go there if you want to see how many miles I've done so far! It is a challenge to keep motivated; I love walking but find doing an hour or so (about 3.2 miles) a day gets a bit boring - although I have purposely found new routes I do end up doing the same ones. I have thought about doing fewer longer walks, but actually making myself walk every day is good for me. Dilemma.....

I have managed now to embed a Strava widget (top left hand side bar) for those of you who are into Strava. For some reason it's not showing up what I've done in the last few days, so I hope it rights itself somehow. [Note: Have realized that Strava is not including my walks on the widget, although they are visible to me and my followers. It does however show my bike rides so I'll leave the widget there!]

It has occurred to me recently that a lot of people might read a blog and not think about signing up to get regular updates. Or not know how to sign up. If you are interested in receiving updates then you can do so by filling in your email address on the right hand side bar, or by clicking on the Google Plus thingy. To be honest I'm not all that sure I know what Google Plus is for....... I would have to remind myself! I usually sign up to blogs by email and then I know exactly what I'm doing!