I always enjoy cycling more when I've got a motive, whether that's the need to get somewhere and the bike is the only way of getting there, or whether it's just a lovely day and I can have a WHOLE day out - I'm not so good at getting out for shorter rides.

So I've decided to join in with this "coffeeneuring" challenge (details here, Oct. 7th to November 20th) which I came across on this (anniebikes) cycling blog I've recently started following. Basically it's about cycling and drinking coffee or tea. What's not to like?! I'm doing it as a way of making myself get out for short, but more frequent, bike rides during the next few weeks. I'll no doubt need another challenge after that to keep me going throughout the winter! It also means that when I eat that naughty something with my coffee or tea I can at least say "Well I've just used enough calories cycling here to justify it!"

This morning's trip, then, was down to a nearby lake at Baulking, which was until a few years ago a fuller's earth mine. I made coffee in my insulated Thermos cup and took it with me, along with a chocolate Hob Nob - currently on offer in Sainsbury's. I've never used the cup much so didn't know how well it would retain the heat. [NB - we did not choose this awful grey/green Formica! Or the tiles. Or the cupboards. But still, I can put up with them. Just.] 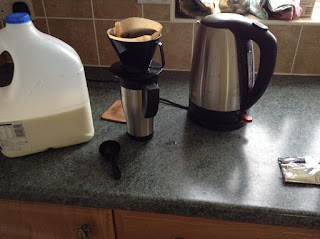 When the mining operation was closed down they planted lots of trees round what is now the lake, and there are footpaths through them. I got quite close to the lake with my bike but then came to a kissing gate, so locked it up to the fence and walked the rest of the way to the lake.

The photos are terrible. I don't know whether that's my camera or me, although I do know that there is a problem either with the camera, the charger or the battery as the battery went dead on me despite being newly charged.

So this is a grotty photo of the view across the lake. In the distance you can see White Horse Hill. Don't ask me what that grey splodge is..... 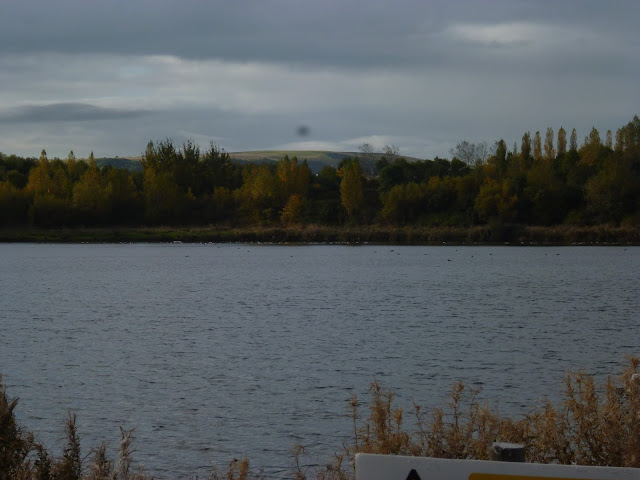 On the lake there are geese, swans and ducks. And apparently something called Blue Algae which can be dangerous, so the signs say, if you come into contact with it.

Unfortunately there are no benches to sit on and of course the grass was wet, so I just stood here and drank my coffee, which was warm rather than hot. But still, it made a lovely change from drinking it at home. And it was a good job I'd put the cup in a plastic bag (that's the white thing in the pic) and kept it upright in my panniers as it had leaked. Probably need a proper flask rather than one of these cups. This was where I stopped. 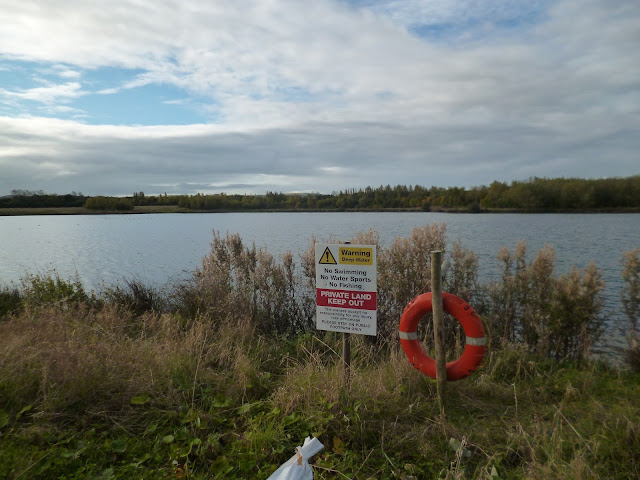 I then walked all round the lake and struggled a bit to find my way back to my bike. I am a bit inclined to get lost (probably older siblings kept telling me to when I was a child and it went very deep psychologically - certainly older sister and then boyfriend-now-husband bribed me with money for ice lollies to get lost!) but I don't really mind. Getting lost can be quite beneficial, and this morning I was in no particular rush to be anywhere so didn't mind getting mildly lost.

Because of the dodgy camera battery I didn't get the pic of my bike as proof that I'd actually cycled here (there are Rules for this challenge!) but the ride is on Strava so if anyone disputes my claim then I'll tell them to look on there.

I was going to cycle home doing a circuit of 6 or 7 miles but as it was such a lovely day I made it a longer circuit of 12 miles or so.